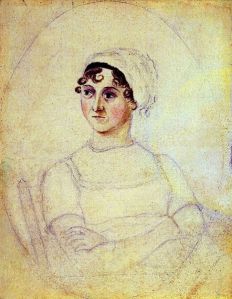 A portrait of Jane Austen by drawn by her sister Cassandra Austen, c. 1810. (Courtesy Wikimedia)

“At a Chelsea Gallery, It’s All Smiles [Meaning, There Are Emoji in This Show]” [WSJ]

People are burning down their arty homes in Detroit for the insurance money. [Bloomberg]

Two signed dot works by Damien Hirst worth £33,000 have been stolen from a London gallery. [The Guardian]

Here’s a piece on collecting power couple Mera and Don Rubell, and the new show of Chinese contemporary art at their Miami museum. [NYT]

German auction houses barely protect the buyer in the event that work sold is later proven to be fake. [The Art Newspaper]

And here’s the latest episode of Rap Show. [Sex Life]