Is it Dan Garodnick’s time to shine? (Photo: Facebook)

Headline of the Day: “Wanted: Schools Chief Who Has Never Crossed de Blasio on Education.”

The latest in the speaker’s race emerged last night when the three county leaders with votes–Bronx, Brooklyn and Queens–coalesced and started making phone calls on behalf of Dan Garodnick‘s bid. “Dan clearly is overwhelmingly the right candidate for the job, so I wasn’t surprised when I got the call,” said Councilwoman Elizabeth Crowley, cousin of Queens leader Joe Crowley.

The move would appear to be a game-changing backlash against rival Melissa Mark-Viverito‘s candidacy–boosted by Bill de Blasio‘s support yesterday–but a Progressive Caucus source repeated earlier claims that they already have the necessary 26 Mark-Viverito votes locked up. “We are confident that our votes are real,” the source told City & State.

The Wall Street Journal profiled how “Ms. Mark-Viverito and Mr. Garodnick have divergent personalities, governing styles and political priorities.” For instance, political consultant Evan Thies, a friend of Mr. Garodnick, said, “If Dan wasn’t a councilperson, he’d be a rabbi or a priest. I swear I’ve never seen him lose his temper.”

Meanwhile, Mr. de Blasio’s wife, Chirlane McCray, has been quietly scheduling meetings with various councilwomen in the legislative body. “She wanted to meet to talk about the issues that are important to me and important to her and how they could tackle them in the new administration,” Councilwoman Rosie Mendez told Capital New York.

Mr. de Blasio himself has an announcement at CUNY City Tech today, the possible location of an education hire like schools chancellor? The front-runner appears to be Carmen Fariña, who once was resistant to the idea of returning to public service but told The New York Times yesterday, “I will do whatever the new mayor wants me to do.”

Billionaire ex-GOP mayoral candidate John Catsimatidis, went on Road to City Hall last night, where he commented on contributions he gave against Republican candidates like Councilman Eric Ulrich and Congressman Michael Grimm; he simply quipped, “Somebody has to follow Mike Bloomberg.”

While State Senator Liz Krueger went on Capital Tonight last night to push for the legalization of recreational marijuana use and ended up correcting an earlier claim about the last time she smoked the drug. Here’s the transcript:

Liz Benjamin: This is a good time for us to set the record straight. Which is that the last time you smoked marijuana was in 1976; you erroneously said it was when you watched a Cheech and Chong movie. It turns out it was not.

Liz Krueger: This is correct. It was 1976, I was a sophmore in college. But the Cheech and Chong movie actually came out 2 years later. I was watching a different movie. And so I apologize for the misinformation.

Liz Benjamin: And the different movie was?

Liz Krueger: It was The Rocky Horror Picture Show. My best friend and I since college pored through the movies of 1976 to figure out what movie we had both seen that could have been the situation. 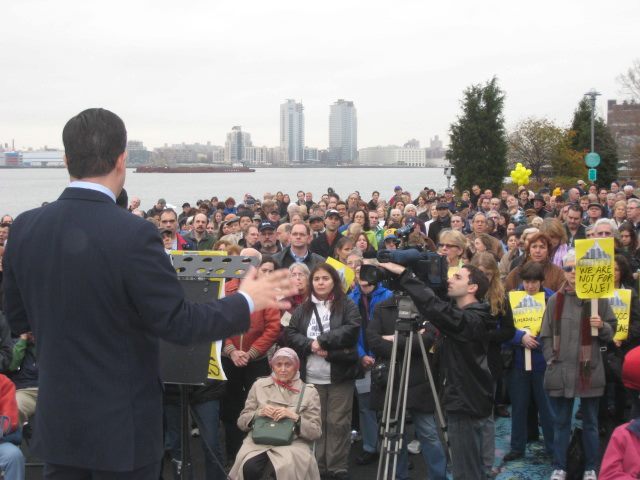