NEWARK – Holding up bright signs in a dense fog, cabin cleaners at Newark International Airport protested against low wages on Thursday in a show of solidarity with fast-food workers striking nationwide.

Standing before workers chanting “I can’t survive on $7.25,” union officials pointed to what they believe are serious inequities in the airport workplace.

“This airport has the largest concentration of minimum wage workers in the state of New Jersey,” said Kevin Brown, New Jersey State Director of 32BJ SEIU, the largest property service workers union in the country. “When they contracted out all these workers, they contracted out to the lowest wage contractor. If you took the CEO of United Airlines, and you compared him to one of the cleaners here, it would take them 500 years for them to earn what he earns in just one year.”

One of those workers, Rassan Roane, of Newark, spoke out about what life is like when already low wages go down, not up.

A wave of fast-food worker strikes began last year in New York City in the hope of achieving a $15 per hour wage. Strikes have spread to seven cities in the spring and fast-food workers in 60 cities went on strike in August.

“It’s a travesty to have workers from Newark who cannot feed their families, and who still cannot go home when they’re sick,” said Baraka, who was endorsed by 32BJ SEIU earlier this week. “That is not only incorrect – it’s inhumane.”

There were just as many Baraka campaign signs at the rally as there were signs supporting the workers’ cause. When asked if such a political display was inappropriate, Baraka was unperturbed.

“This was their way of saying that they’re supporting Ras Baraka for mayor,” Baraka said. “A support Ras Baraka sign to them means support to increase the minimum wage.” 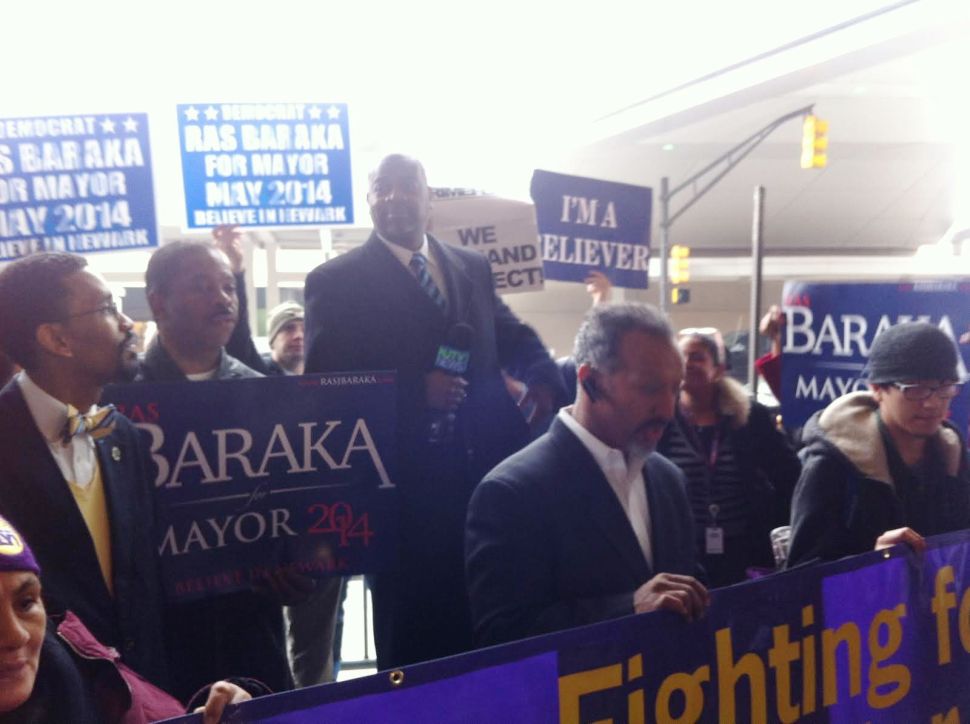