I tend to side with my bearded brethren on most things. Men of facial hair like Abraham Lincoln, Ulysses S. Grant, Ernest Hemingway and, of course, Jesus clearly demonstrate that whiskers are the prerequisite of greatness.

But Phil Robertson, patriarch of Duck Dynasty, might have broken the unshavenness-is-weightiness rule with his silly and gratuitous remarks about gays.

Hardly a week goes by without some religious guy in America blathering on about how homosexuality is like bestiality. Last week, it was the Duck pop’s turn: “Start with homosexual behavior, and just morph out from there—bestiality, sleeping around with this woman and that woman and that woman and those men.” From there, Robertson turned to the Bible, calling homosexuality a “sin” and ended with this humdinger: “It seems like, to me, a vagina—as a man—would be more desirable than a man’s anus. That’s just me.”

No country in the world is more obsessed with homosexuality than America. And judging from the constant religious attacks against gays, you would think it’s the only sin in the entire Bible. One might easily forget the fact that the word “abomination” appears approximately 122 times in the Hebrew Bible, including eating nonkosher food (Deuteronomy 14:3), a woman returning to her first husband after being married in the interim (Deuteronomy 24:4) (did anyone say Elizabeth Taylor?) and bringing a blemished sacrifice on God’s altar (Deuteronomy 17:1). Proverbs goes even further, labeling envy, lying and gossip “an abomination to the Lord” (3:32, 16:22). Still, if you’re religious, the only abomination you’ve ever heard of is homosexuality, which gives you the right to compare it to man-on-dog relations 24/7.

A good many of the religious people condemning homosexuals as perverts because of the word “abomination” seem to forget the New Testament, where the world “abomination” appears in its original form only twice (Luke 16:15, Revelation 21:27), where it seems to be implying that love of money is an abomination, which might give some of the televangelists flying in G5s pause before going after gays.

And for those religious people accustomed to equating homosexuality with immorality, I remind them that God gave the Ten Commandments not on one large stone but on two separate tablets. The reason was to distinguish between two different types of transgression: religious and moral. The first tablet involves transgressions between God and man, such as the prohibitions of idolatry, blasphemy and desecration of the Sabbath. The second tablet contained moral sins between man and his fellow human, like adultery, theft and murder.

The essence of an ethical violation, as opposed to a religious infraction, is injury to an innocent party. This is not the case with two unattached adults entering a consensual relationship that is not based on deception or lies.

I am an orthodox Rabbi, and I freely acknowledge that the Bible clearly labels homosexuality a sin. However, it is not a moral sin but rather akin to the prohibition of lighting fire on the Sabbath or eating bread on Passover. It may violate the divine will, but there is nothing immoral about it.

So if religious people were serious about their faith, they would treat those who smoke on the Sabbath with the same opprobrium they reserve for gays. The fact that they don’t shows that their opposition to homosexuality has little to do with religion and a lot to do with homophobia.

Judaism, I feel, has a very healthy approach to homosexuality. It’s this simple. There are 613 commandments in the Torah. One is a prohibition on homosexual relations. Another is an obligation to have children. I tell gay couples all the time. “You have 611 commandments left to you. That should keep you busy. Now, go give charity, honor the Sabbath, put a mezuzah on your door, keep a kosher home, and pray to God three times a day for you are his beloved children and He seeks you out.”

As to Duck dad’s most creative line, let’s be straight (no pun intended). A heterosexual male who focuses only on his wife’s genitals—to the exclusion of her hair, elbow, arms, legs, shoulders, lips and elsewhere—makes him an incredibly boring lover and a sexually monolithic man. Because most men today treat foreplay as if it’s a kind of golf club, the rate of male to female orgasm is 8-to-1, and the average sexual encounter between husband and wife lasts seven minutes at a time (which includes the time he spends begging). Sexuality is instinctual, and preference is unique to the individual.

Faith-based opposition to homosexuality as a religious sin is understandable, just as religious opposition to eating on Yom Kippur is understandable. But all this other stuff—it is immoral, doesn’t lead to procreation, is part of a promiscuous lifestyle—seems more relevant to the revolting and growing culture of drunken hookups, particularly on the American campus, where women are treated by men as little more than fleshy masturbatory material. Yet we almost never hear religious leaders decrying the promiscuity of the heterosexual club culture with anything near the intensity with which they attack gays. Indeed, the strangest thing about traditional people attacking gay marriage is that the only men left in America who seem eager to marry are gay. While homosexuals petition the U.S. Supreme Court for the right to marry, straight guys are living with their girlfriends for half a millennium and still struggle to commit.

As an orthodox Rabbi, I am not pro-gay marriage. I feel the best solution to the same-sex marriage debate is simple: marriage for none, civil unions for all. Let our government withdraw fully from the marriage business, opting instead to grant civil unions to the couples who seek them, be they straight or gay. This is simply a question of equal rights for government matters like tax and inheritance benefits and end-of-life decisions. But marriage, a religious institution, should be consecrated by priests and clergymen as dictated by their conscience.

By ending the gay marriage debate once and for all, we might even address the real values corrosion in America, such as the 50 percent divorce rate, the lack of a national year of service and the death of family dinners. But obsessing over gays guarantees that we’ll forever duck America’s problems. Just because it walks like a duck, sounds like a duck and quacks like a duck doesn’t always mean it’s a duck. And just because religious people blame gays for the moral decline of marriage doesn’t mean that we straight people haven’t done a mighty fine job of ruining the family ourselves. 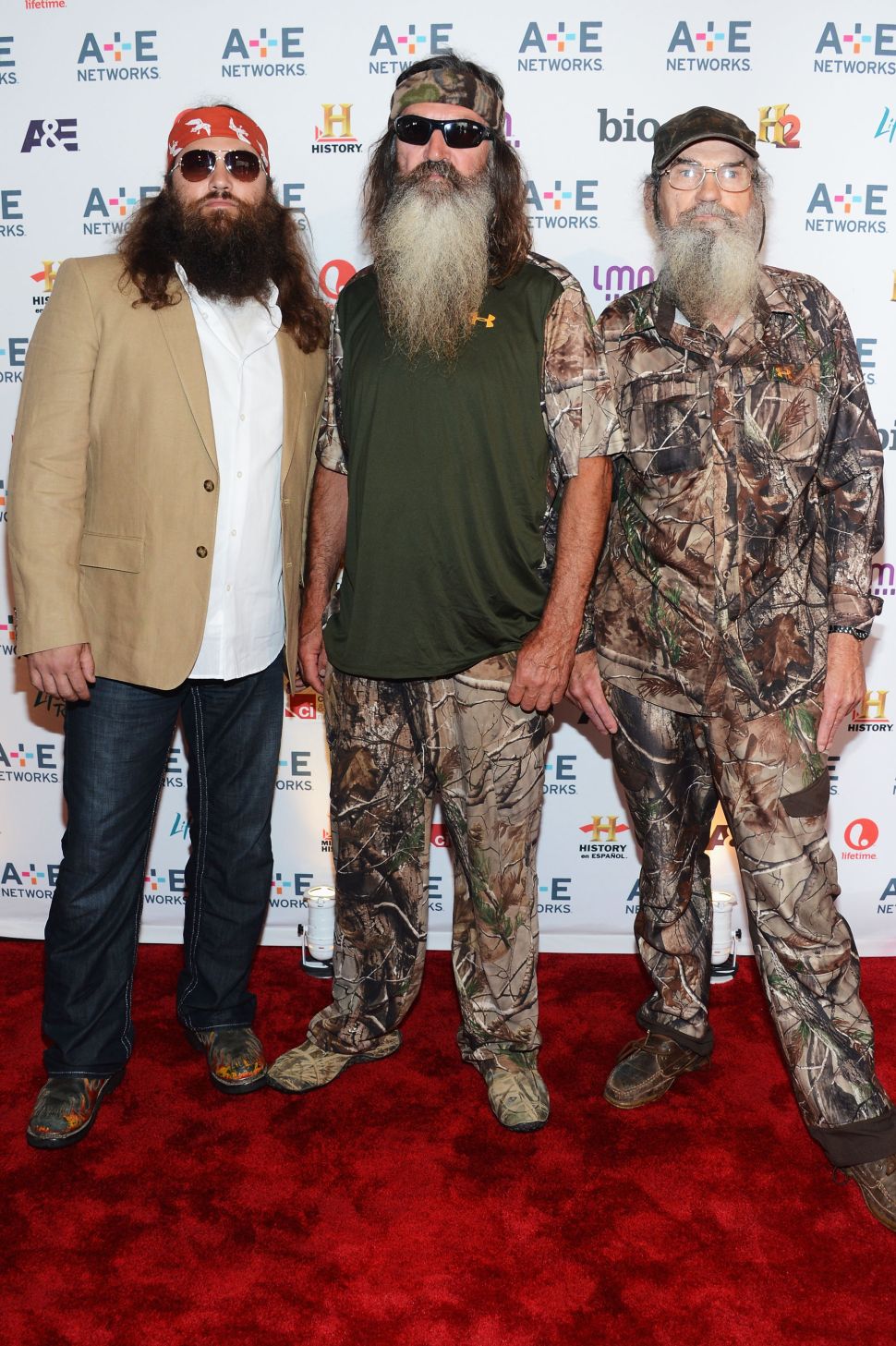