Independent expenditures weakened party organizations to such a degree in 2013 that political insiders wondered about the future of those organizations.

But they still played this year and will play, and what follows is the current political state of 12 of the most active party county organizations in 2013 and a gut-check of those counties where they work…

They were one of the weakest organizations just a year ago, as local loss after local loss accumulated to cause embarrassment among Democrats who could remember the leadership of then-HCDO Chairman Bob Menendez. It was already bad when Sal Vega ate a 2011 defeat in West New York, but when Menendez ended up fighting with HCDO Chairman Mark Smith over 2012 congressional endorsements, the organization went off the rails. Steve Fulop ran over the last vestiges of the organization in the May Jersey City mayor’s election and helped redefine the new look HCDO under the auspices of powerful state Sen. Nick Sacco (D-32). Sacco installed Prieto (D-32) as the new chairman to replace Smith, swinging the geographical pendulum of power from Bayonne to North Hudson, along with a twist of Fulop’s Jersey City. Then Assemblyman Jason O’Donnell’s (D-31) failure to win the state party chairmanship – with behind-the-scenes assistance from Menendez – concretized dysfunction in the Smith era.

They took a hit this year when their most powerful personage, Essex County Executive Joe DiVincenzo, endorsed Gov. Chris Christie, and the organization’s long-serving chairman, Phil Thigpen, died. Essex lost the speakership and continues to suffer factional differences. While U.S. Sen. Cory Booker (D-NJ) seldom defied the county party organization and always maintained very close relations to DiVincenzo, renegade Democrat Ras Baraka remains the favorite in the Newark mayor’s race, threatening to shake up the party in the county’s biggest city. Essex still has the largest concentration of Democratic Party votes in the state, however, and claims Booker, the second most powerful Democrat in the state. New Party Chairman Jones was Thigpen’s hand-picked successor and is a savvy political player in his own right, with strong organizational underpinnings in his hometown of East Orange and close ties to DiVincenzo.

Rising Stars: Essex County Clerk Chris Durkin; when DiVincenzo steps aside, the politically savvy clerk is well-positioned to run for the seat of power. East Orange Mayor-elect Lester Taylor; the new mayor appears to be young and vigorous and enjoys strong relationships with the new chairman and the county executive. State Sen. M. Teresa Ruiz (D-29); long thought to be a mere Adubato-automaton, Ruiz has distinguished herself in Trenton on education reform.

Most Recent History: They consistently turn out the biggest Republican pluralities in the state. In the words of one Democrat after the U.S. Senate special election, “Obviously, we still haven’t figured out what to do about Ocean.” Despite excellent production this year, the Ocean GOP suffered a lone significant general election setback: a loss in the Brick Township Mayor’s election.

Reasons for Success: Veteran Ocean County GOP Chairman Gilmore is one of the most powerful political operatives in New Jersey, running his county the same way the toughest Democrats used to run Hudson. The fissures that dog Essex County, for example, do not pervade Ocean.

Reason for Success: Unity. Separately they don’t impress, but together they form the basis for South Jersey’s political dominion over the rest of the state. They have their individual chairs, but all fold into the political empire of South Jersey Power Broker Norcross, who routinely cuts the deals that result in legislative leadership power-sharing. In 2009 and 2011, Norcross cut the deal with DiVincenzo. In 2013, he cut the deal with Sacco. In both cases, Norcross was the constant.

They run the county, falling prey only to those presidential election years when a Democrat – in this case Barack Obama – heads the opposing ticket. They have enjoyed a good run over the past seven years as Layton – under former Chairman Glenn Paulsen’s tutelage – continues to wield majority control of the freeholder board and other county offices.

Reasons for Success: Paulsen’s work ethic created a template for success. Consider these numbers: 89,601 registered Democrats to 64,957 Republicans in Burlington, and yet still the GOP dominates.

Most Recent History: Based on the 2009 election outcome, when Republican freeholder candidates rode Christie’s coattails to victory in three freeholder contests, insiders watched Passaic closely this year. But Passaic Democrats used the 2011 and 2012 engagements to sharpen their performance and had little trouble re-electing Passaic County Sheriff Richard Berdnik and the Democratic freeholder incumbents.

Reasons for Success: The committee thrives owing to a power-sharing agreement between Currie and U.S. Rep. Bill Pascrell (D-9). The pair of leaders have had a good two years, triggered by Pascrell’s primary victory over Steve Rothman, and culminating with a frayed statewide party seeking out Currie as a compromise candidate for state party chairman.

Rising Stars: Youth recreation league director Assemblyman Benjie Wimberly (D-35) has built an impressive political base that now extends into Bergen County, to Hackensack, where he coaches football. His district-mate, Assemblywoman Shavonda Sumter (D-35), should also not be underestimated.

Most Recent History: No one paid attention to Monmouth in 2013 with Christie at the top of the Republican ticket, and indeed Election Day produced no surprises, as the GOP dominated. Only Bergen (136,178) and Ocean (125,781) produced more votes for Christie than Monmouth (123,417).

Reason for Success: Except for a brief spell after the 2008 Obama election, Republicans have run the county for as long as most people can remember, more recently on the strength of pulling the independent vote.

They have an open primary in Morris, which limits the power of the party organization. But in Christie’s home county, the overwhelmingly Republican Morris provides no oxygen for Democratic challengers in county government.

Rising Star: Assemblyman Jay Webber (R-26) – he’s already served in a statewide capacity as Republican Chairman and could break out as either the Republican Party’s challenger to  U.S. Sen. Cory Booker or a future congressman when U.S. Rep. Rodney Frelinghuysen (R-11) retires.

Most Recent History: The county’s dominant Democratic figure, state Sen. Ray Lesniak (D-20), has consolidated power in his home city of Elizabeth, weakening those members of the Board of Education who have long opposed him. Barring a dramatic reversal, the Elizabeth BOE appear to have taken its best shot at Lesniak in 2011, when they won Elizabeth on their way to defeat district-wide due to the Union Township organizing efforts by Lesniak ally Assemblyman Joe Cryan (D-20). Green this year replaced veteran Chair Charlotte DeFilippo.

Reasons for Success: Democrats have control of the voter-rich urban centers and own county government.

Most Recent History: It’s been a run of real anguish for the dominant party in Middlesex County, starting with the jailing of Chairman John Lynch, Christie’s embarrassing 2009 win over Jon Corzine, the arrest and imprisonment of Perth Amboy Mayor Joe Vas, another party chair meltdown in the person of Joe Spicuzzo, and a chairman’s fight for Spicuzzo’s vacant seat that bloodied both sides, one dominated by state Sen. Bob Smith (D-17) and the other led by Woodbridge Mayor John McCormac.

Recent Successes: Taking advantage of intra-party strife in the GOP, Bergen Democrats secured a veto-proof majority on the Freeholder Board with a win by former Paramus Mayor James Tedesco in a year when the popular Christie’s presence at the top of the opposition ticket presented a major obstacle. Bergen also contributed monster numbers to Booker’s general election victory, second only to Essex. In one of the most watched contests of the cycle, Democrats prevailed in LD38, with close victories by state Sen. Bob Gordon and his team.

Key to Success: Bergen’s size and population make power here integral to control of North Jersey. In the words of one Hudson operative, a Democrat, speaking on condition of anonymity, “That is the ultimate organizing terrain.  If you could put Bergen on lockdown you could run the state.” As New Jersey’s bellwether county, Bergen voters at present favor divided county government.

Challenges: Democrats do not have control of the county executive’s office or the sheriff’s office (which incumbent Mike Saudino just won again).

Most Recent Successes: Boosted by Christie at the top of the ticket, Yudin held onto his close ally, Sheriff Saudino, and post-election secured a peace treaty with Bergen County Executive Kathe Donovan, which positions the BCRO leader for another term as chair. Bergen produced more votes (136,178) for Christie than any other county. 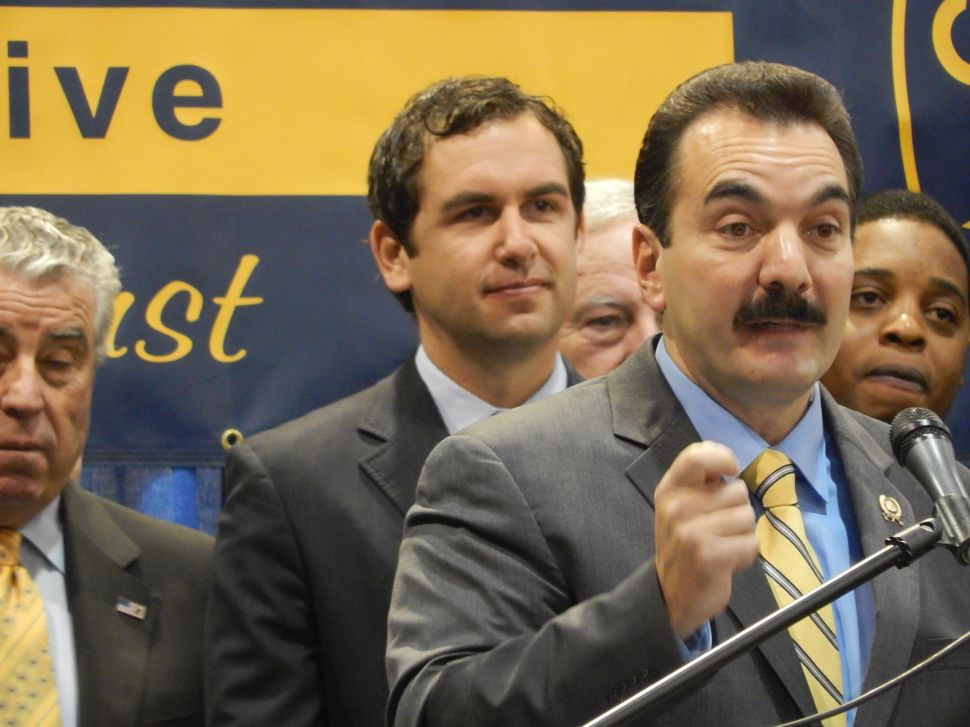