New York Senator Chuck Schumer is confident the Senate will pass the bipartisan budget deal that sailed through the House last week 332-94.

“I think it’s a pretty safe bet it’s going to pass,” the veteran lawmaker said this morning on MSNBC’s Morning Joe. “After what happened in the House, where so many Republicans voted for it, I think Mitch McConnell and the Republican leadership knows they can’t let it go down.”

The two-year deal, hatched by Republican Congressman Paul Ryan and Democratic Senator Patty Murray, would prevent another government shutdown, but does not include an extension of expanded unemployment benefits, which are set to expire at the end of they year. The benefits are a priority for President Barack Obama and many Senate Democrats, but Mr. Schumer said he expects his colleagues to “reluctantly” vote for the deal and try to push through the benefits separately come January.

“It’s a safe bet–a pretty safe bet–McConnell will not let this go down,” he said. “I’m sure the Republican leadership–I would bet–is not going to risk another government shutdown. The vote in the House made that certain.”

Mr. Schumer went on to celebrate the deal as a sign Washington gridlock may finally be easing.

“The House for the first time stepped up to the bipartisan plate,” he said. “I think this was a breakthrough. Why? What’s held things up for the last while is the Tea Party faction in the House, which blocked basically everything,” he said–eliciting objections from host Joe Scarborough.

“If I could have one thing on any football team, it’s not the quarterback who gets all the glory or the ends of the running backs or the safeties. It’s a good front line,” he said. “Theirs has fallen apart. It leaves Eli naked.” 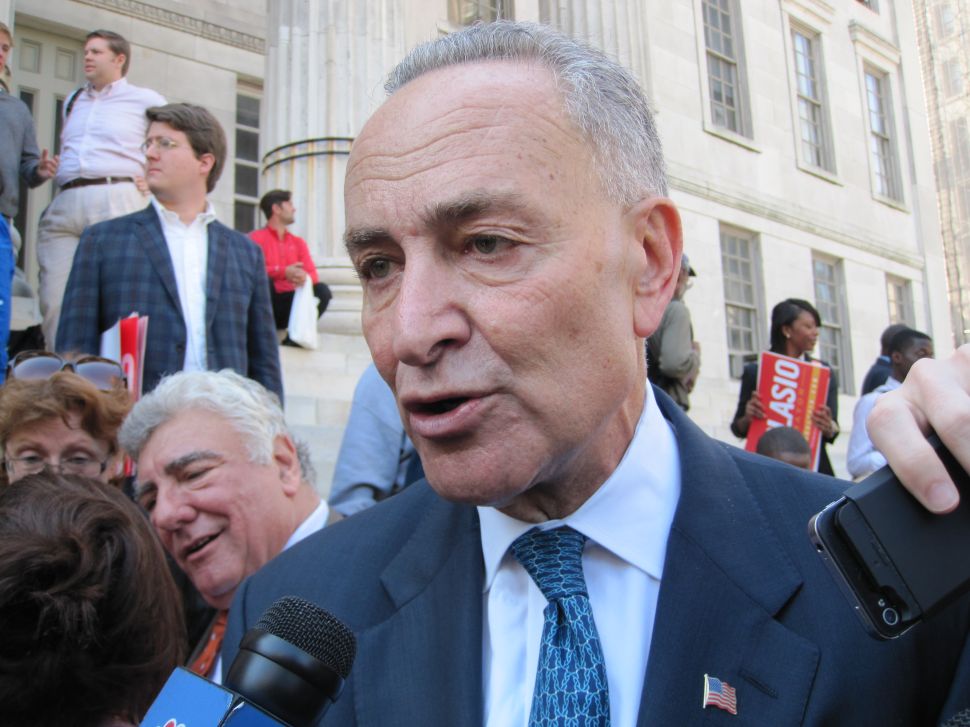