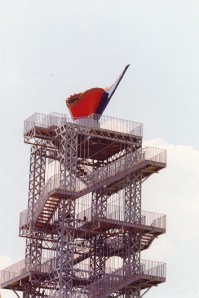 Alexander Gray Associates is pleased to announce the representation of Siah Armajani (b.1939). Armajani was born in Iran and moved to the United States in 1960 to attend Macalester College in Minnesota, where he continues to live and work. His sculptures and public works, informed by his democratic and populist ideals, exist between the boundaries of art and architecture. With nearly one hundred projects realized internationally since the 1960s, Armajani is recognized as a leading figure in conceptualizing the role and function of public art.

As a student in Tehran, Armajani was drawn to American philosophers and writers, and later studied American populist thought as a philosophy major in the U.S. These early theoretical interests continue to catalyze his work, taking form in objects and architectural spaces designed in homage to literary, philosophical, and political figures including John Dewey, Ralph Waldo Emerson, Theodor Adorno, Ahmad Shamlou, and Luigi Galleani, among others. Curator Murtaza Vali describes Armajani’s sculptures as, “thoughtful modulations of space and things, emblematic of [Armajani’s] distinctive and extensive oeuvre that has primarily engaged with politics and philosophy at a formal level.”

American vernacular architecture has been a consistent visual motif in Armajani’s practice, and is embodied in his public works, including bridges, gardens, and outdoor rooms. In Armajani’s words: “I am interested in the nobility of usefulness. My intention is to build open, available, useful, common, public gathering places—gathering places that are neighborly.” These concerns take form in his ongoing series of Reading Rooms and Reading Gardens, public spaces, pavilions, and shelters for social exchanges or solitary meditation. Armajani’s Tombs, his most recent sculptures series, are uninhabitable glass and wood structures that reference both American modernist and vernacular architecture, playing tribute to figures including Martin Heidegger, Walt Whitman, John Berryman, Nicola Sacco, and Bartolomeo Vanzetti, among others.

Alexander Gray Associates is a contemporary art gallery based in New York. The gallery has established a profile for high-quality exhibitions focused on mid-career artists who emerged in the 1960s, 1970s, 1980s, and 1990s. Influential in political, social and cultural spheres, these artists are notable for creating work that crosses geographic borders, generational contexts and artistic disciplines. Alexander Gray Associates is a member of the Art Dealers Association of America.