Finally, a tech guy is dating someone interesting!

Snapchat CEO Evan Spiegel’s girlfriend, Lucinda “Lucy” Aragon, is a contestant on the next season of The Bachelor, which premieres Jan. 5, 2014, Business Insider reports. This is thrilling. Finally, a tech WAG who’s down to liven this bitch up.

No offense to the Priscilla Chans of the world; we are just big fans of reality TV here at Betabeat, so we love when our twin loves of the tech industry and, say, Real Housewives, collide.

On Ms. Aragon’s The Bachelor bio, she says she’s 5’9″ and hails from Santa Barbara, CA. Her occupation is Free Spirit, which doesn’t make much sense until you get to the bottom and see that she spurns the city and the country in favor of being an “ocean person.” It’s hard to hold a job underwater.

She says she wants to get “a husband” and “a daughter” out of her time on The Bachelor. Now that she’s publicly dating someone else, though, it’s safe to say her time on the show this season will last only slightly longer than a Snapchat photo does.

“I admire my best friend Kate Upton for her thick skin, my mother for her patience with me, and Steve Jobs for always believing in himself,” reads her profile.

We feel like Ms. Aragon is probably the “not here to make friends” variety of reality show contestant. After all, it’s easy to pull the #nonewfriends card when you’re the self proclaimed bestie of Kate Upton:

SI launch with my two besties. I'm sorry but I DARE YOU to have two hotter best friends than me. #impossible #whereiswim

Ms. Aragon also likes to paint her face, wrap a glowstick around her head and hang out with Larry David:

A very happy birthday to my boy LD! Love you to the moon in back #curb #comedy #birthday #genius 🎈🎂🍰❤

She’s constantly posting bikini pics online, but we would be too if we weren’t cursed with a bad case of blogger bod.

Business Insider is kind of offended: “We’re sure she’ll enjoy the attention,” their reporter writes. “Her Facebook and Instagram accounts are full of topless pictures of herself.”

Lucy, Betabeat will never shame you for your tattoo or (lack of) swimwear choices, and we fully support all of your decisions, especially the ones that are made publicly. 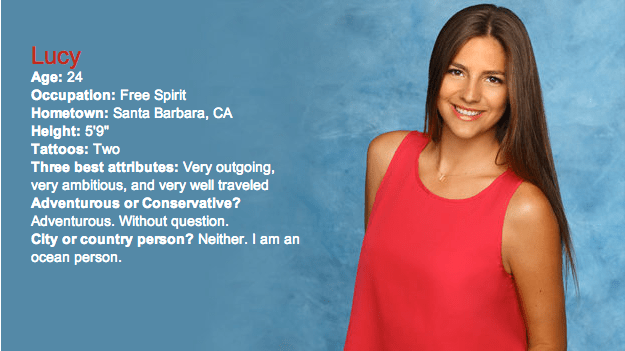