When Quintana was sworn in as Newark’s mayor in November to complete Booker’s unexpired term, most watchers of the city’s political scene thought Quintana would be just a character actor in Newark’s ongoing political drama. After Booker went off to the U.S. Senate, Quintana would fill the mayor’s role while the battle between councilmen Anibal Ramos, Jr., Ras Baraka and Darrin Sharif, as well as former state Assistant Attorney General Shavar Jeffries, in the May 2014 election would take center stage.

But according to a longtime Newark political operative who requested anonymity, Quintana increasingly wants the permanent spotlight of the city’s top job.

“Every move that Quintana has made are signs of him consolidating the structure that he’s going to need to mount an assault for the mayor’s seat,” the source said. “He says he has no interest in running, that he’s only a caretaker. But the people who are around him don’t benefit from him being just the Council President. There’s no money in that. The money is in being the mayor.”

According to the source, a Quintana candidacy is not only conceivable, but increasingly likely after examining the chances of the two leading African-American candidates.

Quintana’s recent personnel moves are an attempt at building an executive record in a short period of time, according to the source.

“He’s walking around without body guards. He’s taking away city cars very soon from mayoral staff. This is a person who is trying to show effective leadership with effective government. He showing what he can do as mayor. Do more with less – this is what the community wants to hear,” the source said. “My gut tells me he’s running for mayor, and if he’s not decided completely, he’s heavily exploring it at the impetus of people around him, like [veteran Newark political operative] Pablo Fonseca.”

Fonseca told PolitickerNJ.com that Quintana is focused on the present, not the future.

“I consider Mayor Quintana a close friend. In all of my conversations with him, he has had no intention to run for mayor. He is focused for running for re-election [to the council] at large,” Fonseca said. “He wants to do a great job over the next several months, and that’s what he’s working hard to do every day.”

Corchado was rumored to be a 2014 mayoral candidate, but his appointment by Quintana seems to have removed him from the race. The source, however, did not see the move as necessarily removing Corchado from future power.

“I think Corchado has been promised to be the police director once Quintana is mayor, permanently. Quintana is lining up his ducks before he makes a move. He knows that Corchado hates Ramos with a passion. It’s the old adage: the enemy of my enemy is my friend,” the source said, alluding to Ramos’ triumph over Corchado for the North Ward council seat in 2006. “It puts an experienced policeman in the director’s office that will answer to him. Plus, Corchado is a long-term associate of Fonseca. And putting in [local union leader] Rahaman Muhammad as operations director in City Hall tells me Quintana is lining up union support.”

Muhammad, for the record, is a staunch Baraka backer, and other sources say his presence in City Hall points more to Quintana’s friendliness with Baraka than the mayor’s personal designs on his own four-year term.

“Hector Corchado is another longtime friend. We’ve been in the political field together a long time,” Fonseca said. “Mayor Quintana tapped him to be deputy police director because he lives in Newark, believes in Newark and loves Newark. There’s no political scheme behind Corchado being tapped deputy director.”

With the staff pieces in place, the source expressed confidence that Quintana could then run the table on Election Day.

“Quintana will carry the Ironbound, he will carry the North Ward, and he will carry the Spanish-speaking Central Ward,” the source said. “And with the professional population that has moved into Newark, if Quintana shows them a more cost-effective model than what Booker had in place, I can see some percentage of them supporting him.”

Quintana’s potential entry into the race would mean political sudden death for one candidate, the source stated.

“Quintana’s entry ends Ramos’ candidacy, I don’t care how many ward chairmen he has,” the source said, pointing to a split in the Latino vote, but with Quintana still having more support among African-Americans than Ramos. “At that point, [Essex County Executive] Joe DiVincenzo, [Newark power broker] Steve Adubato and [DiVincenzo’s chief of staff] Phil Alagia are going to come down on Anibal and say ‘Listen, now we know you can’t win. You really must step down.'”

“Luis Quintana has made a clear and unambiguous pledge to the citizens of Newark not to run for mayor of Newark in May 2014 and we have to take him at his word,” said Bruno Tedeschi, Ramos campaign spokesman, to PolitickerNJ.com. “Councilman Ramos is too focused on building grassroots support, strengthening his organization and raising money for his campaign to concern himself with the fanciful speculation of the chattering know-it-alls of Newark politics.”

One question looming over Brick City this mayoral campaign is who former Mayor Sharpe James will ultimately endorse. The source outlined a scenario that leads to the ultimate James family comeback through the career of Councilman-at-Large John Sharpe James, who was sworn in last month.

“If your goal as a father is to position your son to run for mayor eventually, who would you rather have in the mayor’s seat?” the source asked. “Do you want Shavar Jeffries in there, who could effectively be there for three terms? Do you want Ras Baraka in there, who will fight you and splinter the South Ward? Or do you want Luis Quintana in there, who may be happy with two terms then walk away and endorse your son and give him everything he needs to become mayor?

“There is a very strong symbiotic relationship between Luis Quintana and Sharpe James,” the source added. “That should never, ever, ever be discounted.”

“If people spent their time governing instead of thinking about who is running or not running, we would have better services in the city of Newark,” James told PolitickerNJ.com. “We should be talking about the 70 people laid off at the recreation department.

“Given the malfeasance of the last seven years, how could you expect Luis Quintana to be a lame duck? He is governing,” James added. “He has seven months. He needs to govern, and he is. All talk of politics in this crisis time is absurd.” 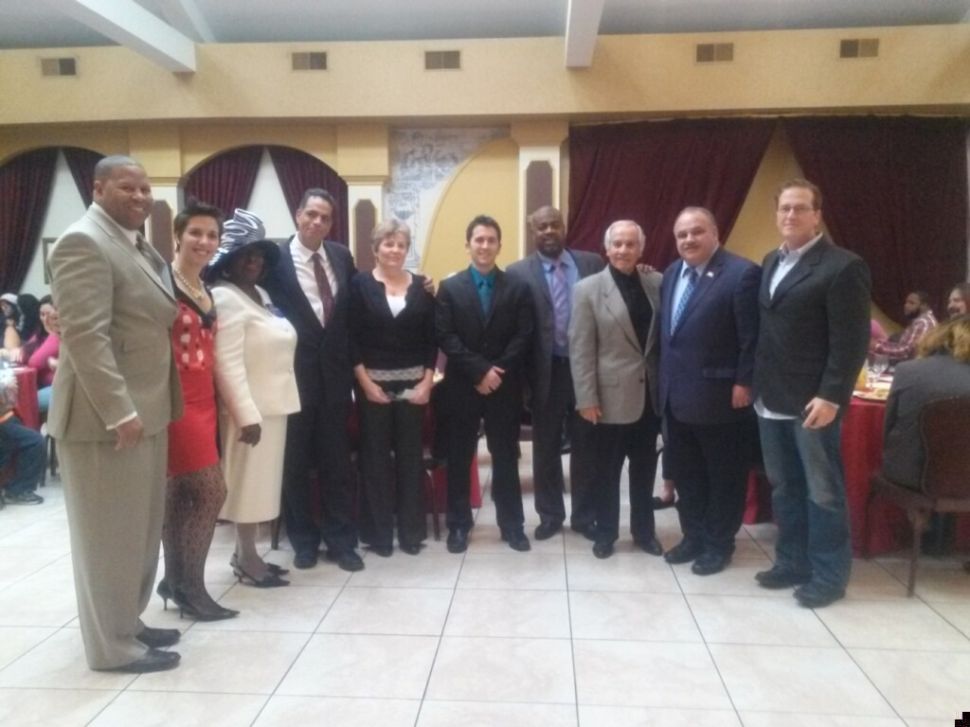