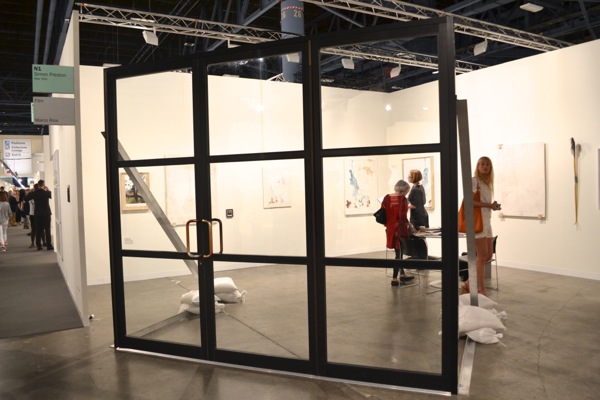 It’s a tricky question for art dealers working Basel: how do you give collectors a feel for your gallery—your meticulously designed base of operations—when you’re operating out of a temporary little box that is more or less identical to those of your more than 200 competitors in the Miami Beach Convention Center?

Thanks to Austrian artist Hans Schabus, the Lower East Side gallery Simon Preston has been able to give visitors a partial, but very literal taste. For a two-person booth with Josh Tonsfeldt, Mr. Schabus had the gallery’s actual storefront sliced out and sent down to Miami as a readymade sculpture, and through Sunday, the glass and metal facade is sitting at the front corner of the gallery’s booth.

When did they make the fairly dramatic architectural alteration? “We did it as late as we could, but then we had to ship it,” director Paula Naughton said. “It was week and a half, two weeks ago, and then, in its place”—she walked me over to a small wall-hung photo that shows the gallery as it is now—”there is this temporary structure.” It’s fronted by plywood, like an abandoned, boarded-up building.

After Miami, the storefront—which is for sale along with the photograph—will return to the gallery where it will become part of Mr. Schabus’s March show there. “Then it will become a kind of a freestanding structure like this,” Ms. Naughton said, motioning to the sculpture. “We’re actually going to replace [the plywood] with a new storefront and as you walk into the gallery space it’s going to become a kind of echo.

“We’re still conceiving it,” she continued. “The truth is this won’t be finished until the new one goes in.”