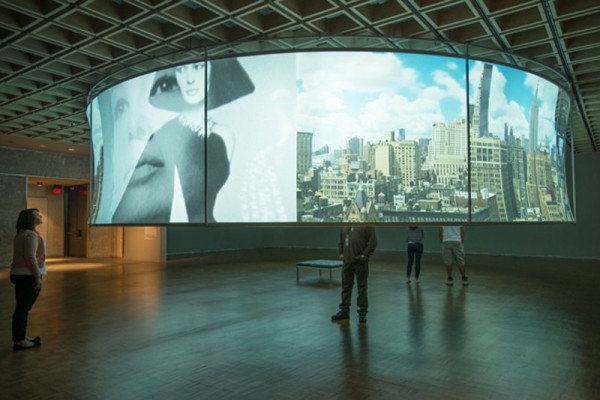 It’s been brutal trying to whittle down a “best of” list for 2013, but the top slot? That’s easy: the New York art world’s recovery after Hurricane Sandy. It’s astounding to think back to October 2012, when galleries were flooded and art was destroyed, when artists and art handlers, dealers and interns could be found without electricity, carrying soggy works from basements, tearing out drywalls and trying to figure out what to do next. The entire foundation of the art world felt threatened. But galleries dug out. They raised money to help dealers who had suffered losses, and by January most of the affected ones were up and running again. 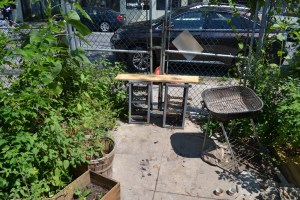 A bench sculpture by Kitnick and McCarthy in Foerster’s show. (Photos by The New York Observer unless otherwise noted)

That experience colored the year for me, as I suspect it did for others. I can’t prove empirically that the art world got any nicer, but it felt like a sense of camaraderie grew out of it. It made an already strong year in art feel just a little bit stronger.

It definitely made the jam-packed summer show that Ryan Foerster hosted at his Brighton Beach home all the more poignant and inspiring. The storm had rendered his bungalow uninhabitable, and he was still working on repairs when he opened the show, stocked with work by exciting young artists like Zak Kitnick, Rose Marcus, Win McCarthy, Jory Rabinovitz, Rochelle Goldberg and Joshua Abelow. It may have been the liveliest group show of the year, spreading out into his yard, onto the roof and into his bathroom. 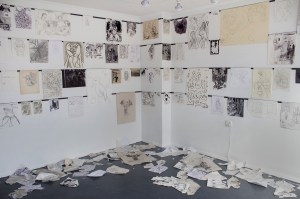 A fierce competitor for that title is “Draw Gym,” the blowout drawing exhibition that artist Brian Belott organized at the ascendant 247365 and Know More Games galleries in Brooklyn’s Donut District, filling their walls with scores of black-and-white drawings by as many artists, with scores more drawings spilling onto the ground. Two other contenders: Bob Nickas’ summer extravaganza in Jose Martos’ North Fork home and Greene Naftali’s bracing “Freak Out.” 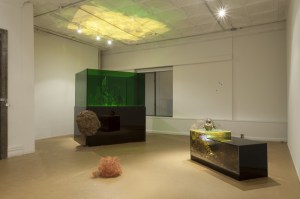 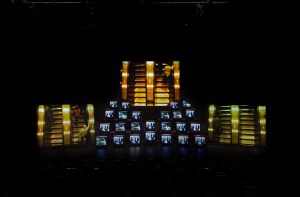 Installation still of Bender, ‘Total Recall,’ 1987, at The Kitchen. (Courtesy the Kitchen)

Galleries also delivered the goods when it came to work by artists who are no longer with us. At Zwirner, Robert Storr’s Ad Reinhardt show, which included 13 of his black paintings, witty cartoons and travel photographs, was the revelation of the year, neck and neck with John Elderfield’s late Willem de Kooning stunner at Gagosian. (There are a few days left on both of those also.) Meanwhile, Davis & Langdale made a worthy case for an Albert York museum exhibition, and the Kitchen a strong argument for a much larger Gretchen Bender show. (We’ll get more at next year’s Whitney Biennial.) And the embattled American Folk Art Museum deserves praise—and, if you’ve got the cash or art, donations—for bringing us not one but two choice Bill Traylor shows. 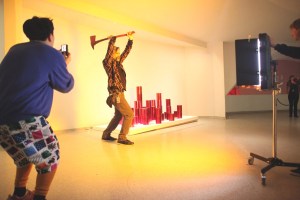 Ei Arakawa at the Guggenheim. (Photo by Paula Court/Guggenheim)

Much of the most memorable art lasted for only a few hours, or a night or two. There were Ei Arakawa’s performances with friends early in the year at the Guggenheim and the Museum of Modern Art that burned with his inimitable ludic wit. (Another reason to get pumped for next year’s Biennial: He’ll colab with Carissa Rodriguez, who offered up one of the year’s most terrifyingly sharp shows, at Front Desk Apparatus.) 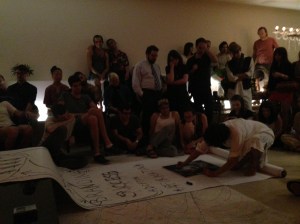 In June, Los Angeles-based artist Dawn Kasper staged an hour-long performance in the living room of a Tribeca condominium once used by Dominique Strauss-Kahn that progressed from funny to exasperating to weirdly pleasurable as she bumbled through a lecture and demonstration before a baffled audience that had been corralled by dealer David Lewis. Late July brought Park McArthur’s head-scratching residency at Essex Street, which had her hanging clothes outside the shuttered space for two weeks in midsummer, a quiet, oblique show about homelessness, space and place that never closed. 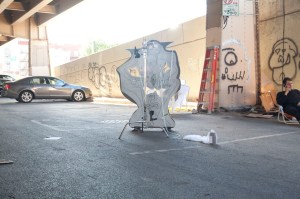 Pulitzer in ‘Under the BQE.’ (Courtesy ML Artspace)

“Under the BQE” arrived in September, a scrappy show organized by artists Marie Karlberg and Lena Henke for one evening under, yes, the Brooklyn-Queens Expressway, which had young guns like Sam Pulitzer, Nicolas Ceccaldi and the curators themselves offering up major new works. (Ms. Karlberg and Ms. Henke are hosting a nail-art salon this evening, Wed., Dec. 18.) On the tonier end of the spectrum, Dominique Lévy Gallery staged Yves Klein’s gorgeous “Monotone-Silence” Symphony with a full choir and orchestra at Madison Avenue Presbyterian Church. 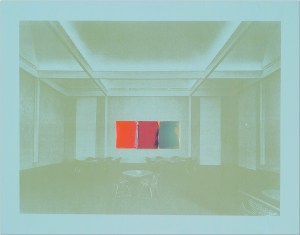 And did you catch David Diao’s epic, stemwinding lecture on Barnett Newman at Dia? I missed it but got the audio from Dia. It’s amazing, as was his painting show at Postmasters. (Still another reason to be excited about the Whitney Biennial.)

The worst art of the year? The less said about that the better, but the glut of bland, meaningless abstract painting currently dominating Lower East Side galleries is a trend that would be nice to stop now. My least favorite shows of the year: Nate Lowman at the Brant Foundation, Angel Otero at Lehmann Maupin and Josephine Meckseper at Andrea Rosen.

But let’s end on a positive note, with what were, for me, the year’s highlights (setting aside MoMA PS1’s Mike Kelley retrospective, which is in a once-in-a-generation class of its own): 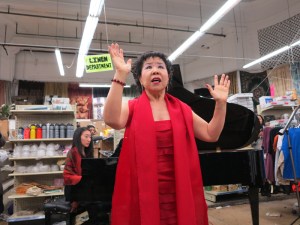 3. The classical music concert that Rainer Ganahl organized early in January (with support from White Columns) at the soon-to-close El Mundo department store in East Harlem, a grand, dilapidated space built as a soaring theater in the 1920s, with professional and student musicians (including artist Ken Okiishi) playing violin and piano, and singing. It was freezing outside, but it was brilliantly warm and deeply melancholic within, amid stacks of clothes and a rapt audience, amid the brutal upheaval that New York continuously inflicts.

2. Danh Vo’s Hugo Boss Prize show at the Guggenheim, for which he presented thousands of trinkets, knickknacks and bric-à-brac (and a few little paintings) from the collection of the late Lower East Side painter Martin Wong (who was himself the subject of P.P.O.W.’s great-looking booth at the ADAA Art Show in March). It was a touching portrait of an artist we lost too soon and a treatise on the meanings that objects generate and the reasons we collect them, whether in our homes or just our heads—a virtuosic piece of art. 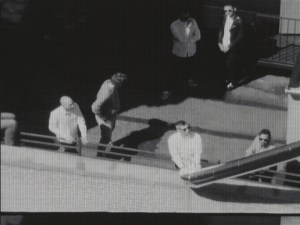 Still from Wilcox’s ‘In the Air,’ 2013. (Courtesy the artist, Metro Pictures and the Whitney)

1. And finally T. J. Wilcox’s “In the Air” panoramic video installation at the Whitney. Shot through the windows of his Union Square penthouse studio, it shows 24 hours of New York’s skyline in the span of about 30 minutes and is interspersed with other short videos: an improbably hilarious vignette about Warhol and the Pope, a sizzlingly entertaining one about Gloria Vanderbilt and one about Sept. 11 that brought me to the verge of tears. (I know I’m not alone on that.) It ranks as one of the most important, most moving artworks ever made about New York. It makes you see our resilient, evolving city anew and invites you to fall in love with it all over again, and again, and again. 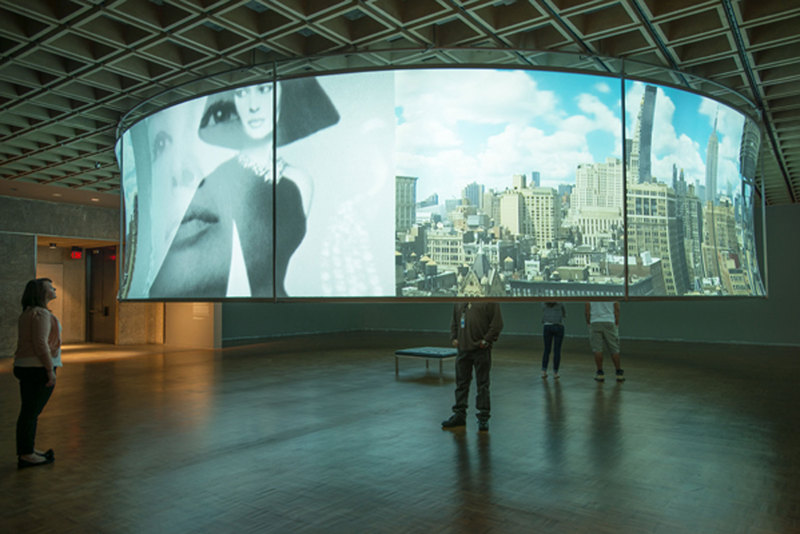