As a non-driver spending the week in San Francisco, I am loving UberX.

Along with Lyft and Sidecar, it is one of three venture-backed, ride-sharing start-ups created in this city. They’re each pretty great.

But for New Yorkers used to hailing a yellow cab, every time you step into a crowdsourced car is a fresh challenge in etiquette.

For starters, where do you sit?

That simple question is more fraught than you might think.

In my native Australia, for example, it is customary for a male taxi passenger traveling alone to sit in the front. And you’re expected to make conversation with the driver. To sit in the back could be interpreted as an expression of class superiority, which doesn’t jibe with the country’s egalitarian culture.

Can you imagine being a lone man in New York City and trying to sit in the front of the cab? The driver would think you were some kind of pervert.

But with modern ride-sharing, you’re getting into someone’s private car.

Sidecar makes it explicit that to “meet new people” is part of the experience. Lyft drivers and passengers are encouraged to greet each other with a fist bump.

The parties are connected through a smartphone app, and both companies are attracted by the idea of using online technology to create an offline, collaborative community.

Faced with such a chummy culture, to climb into the back seat would seem like an act of downright hostility. So with these guys, you better sit up front.

UberX, perhaps because its ride-sharing program grew out of a more traditional limousine hire model, is more formal. Their drivers push the font-passenger seat forward to create more room in the back.

So I don’t feel like too much of a jerk sitting in the back of an UberX.

A lot about San Francisco creative culture, which these local tech start-ups are helping to propagate nationally, is very appealing. In the sunlight and fresh bay air, even the skinny hipsters fronting the revolution seem less annoying than their Williamsburg counterparts.

But I have to admit that I am too old to want to join a crowdsourced community.

All those cheaply-dressed young people look like they’re having a great time hanging out with each other in the ads. And there’s no question that their innovations are driving the culture.

I’ll let them drive me, too—as long as I can sit in the back. 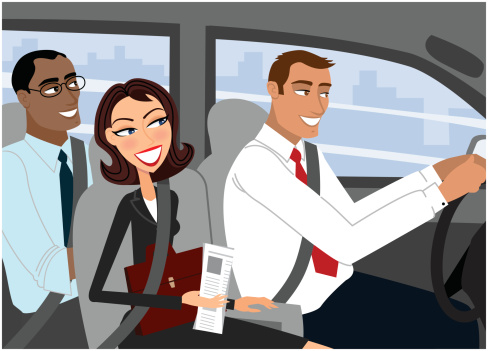