Mike Rugnetta during a recent taping.

In a cluttered Koreatown office, Mike Rugnetta and Andrew Kornhaber huddled around an iMac and giggled over an obviously Photoshopped image of Michel Foucault in a baking apron. In the image, Foucault’s head was twice as large as it ought to have been, sitting atop a female body wearing high heels. Beside Foucault was an oven dubbed “history” from which sprung a loaf of bread labeled “truth.” The image was supposed to convey the postmodernist idea that time can “bake” any erroneous idea into historical fact. But mostly Messrs. Rugnetta and Kornhaber were laughing at an old Frenchman’s oversize head on a woman’s body.

The image became a six-second blip on an episode of the fast-paced, Webby award-winning Internet show Idea Channel, which was co-created by the two men along with Eric Brown and is filmed at Kornhaber Brown Studios on West 32nd Street. A breakout success for PBS’s online division, Idea Channel deftly interweaves academic theory and Internet meme humor to examine the success of hologram Tupac, the religion of Dr. Who and other pop culture phenomena. The baking Foucault image was for an episode questioning whether the legend of Nikola Tesla as an underrated genius can be reconciled with the historically accurate version of Tesla who believed in eugenics. Other Idea Channel episodes have asked whether Nicolas Cage’s seemingly horrible career choices resemble a Taoist approach to life and if Santa has more in common with a professional wrestler than the original St. Nicholas.

On a recent visit to the show’s set, I asked Mr. Rugnetta, the show’s writer and host, who also teaches at NYU, how Idea Channel so seamlessly splices the lowbrow and highbrow. He scowled. “Low- and highbrow are the same brow,” he responded. “They always were, always will be and always should be.” This attitude is reflected in Mr. Rugnetta’s writing process, in which he sits between two bookshelves in his Bed-Stuy apartment and waits for ideas to come to him. On these bookshelves, Ulysses and Name of the Rose sit next to Ender’s Game (although Mr. Rugnetta confessed he only finished the latter a few weeks earlier).

Idea Channel began when PBS reached out to Mr. Rugnetta and asked him to create an intelligent show that would appeal to a twenty- to thirtysomething audience that has traditionally eschewed its broadcast network. Mr. Rugnetta was living in Brooklyn at the time and performing Memefactory, a live show/lecture that examined Internet culture in a rapid-fire, image-heavy manner (imagine two projectors and copious LOLCats). I was lucky enough to catch the show a few years ago at the now defunct 3rd Ward. The highlight of the evening was Mr. Rugnetta and his co-performers directing and filming an audience performance of Get Down, a Japanese glitch dancing meme that was making its way around the Internet at the time.

Similarly, audience participation has been a major part of Idea Channel’s success. The final minutes of each episode are devoted to responding to viewer-posted comments. On the day I visited, Mr. Rugnetta engaged a message left by user Smurfofwar13. Mr. Kornhaber giggled when he told me this was one of his favorite parts of the show, “when Mike has to read these ridiculous usernames.”

Nevertheless, the show has miraculously facilitated thoughtful online debate on YouTube, a notorious cesspool of hate and ignorance. Instead of racial epithets and mom insults, the conversation in Idea Channel’s comments section is sometimes as eloquent and interesting as the show itself. Earlier this year, Idea Channel traveled to Milwaukee to surprise a high school math class whose members had emerged as especially prolific commenters. When Mr. Rugnetta entered the classroom, the students’ jaws dropped as they shrieked in delight.

Following my visit to the show’s studio, I shared a beer with Idea Channel’s creators at Rattle N Hum on 33rd Street. Given its success, I wondered if they envisioned the show making the leap to television. Mr. Rugnetta shook his head. “It’s a YouTube show, not a TV show,” he said. “Things should be coming to the Internet from broadcast, not the other way around. I get to talk to our subscribers. When they watch our show, they’re two button clicks away from talking to me. How cool is that?” 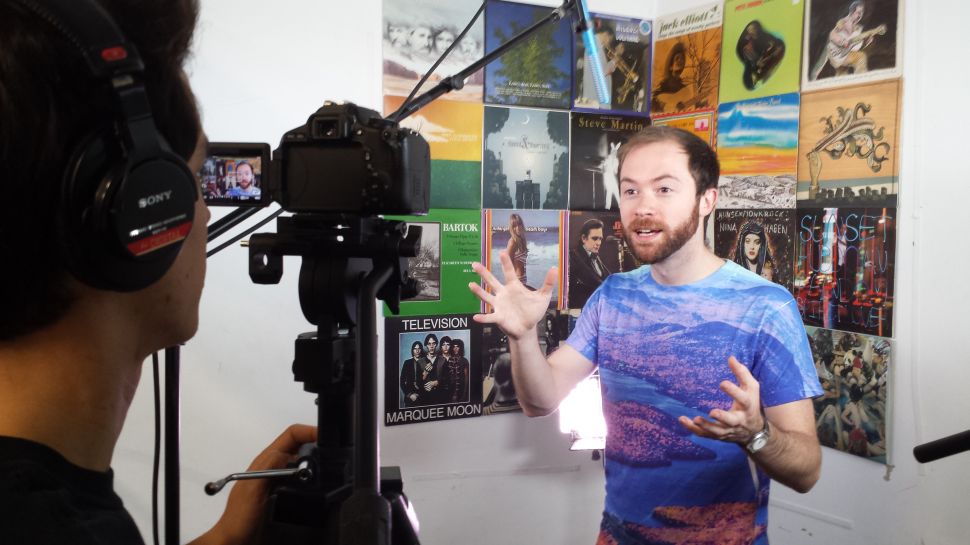