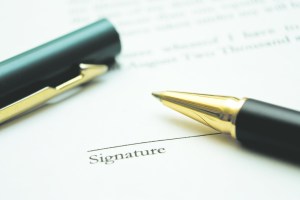 Welcome to the new world of high-priced art buying, where the traditional handshake is increasingly being replaced by a formal contract.

This week, at the annual Art Basel Miami Beach fair, many millions of dollars worth of art will change hands. But while the handshake agreements may take place in the convention center, the paperwork will be far from finished. Today’s corporate-minded contemporary art buyers require contracts containing numerous waivers, contingencies, stipulations and assignment of risk. And new collectors from the world’s developing art markets, like China and Brazil, are acquiring artworks through agents before setting eyes on them, increasing the need for lengthy written agreements.

Peter Stern is not a major art collector or a dealer, nor is he an art adviser, but still he is centrally involved in the sale of “tens of millions of dollars” in works of art, “most on the secondary market.” He is a lawyer in New York City, a partner in the firm of McLaughlin & Stern, with a specialty in art law, and much of his work in this area involves writing contracts for the sale of art that include clause after clause: Who pays the sales tax? What happens if there is a change of attribution some years after the sale? Does the buyer have the right to make reproductions of the image? Who is responsible for legal costs if there is a challenge to the title of the artwork? How will the artwork be paid for? When does title pass to the buyer? Does the buyer (and a conservator) have the right to inspect the artwork before taking possession of the piece? Who pays for crating, shipping and insuring the artwork? Will the dealer guarantee not to disclose the name of the buyer and the price paid (and what if the dealer lets this information slip)? Who pays the commission to the art adviser? Paragraphs cover a range of warranties, provenance, condition reports, indemnification, escrow accounts. It goes on and on.

“People come to me to consummate transactions,” Mr. Stern said, and without that contract full of what-ifs and contingencies, many art sales would not take place. And he isn’t the only one drafting these contracts. High-end art buyers are keeping lots of lawyers busy. “We have a steady stream of business writing agreements for collectors and galleries,” said Jo Backer Laird, another Manhattan arts lawyer working at Patterson Belknap Webb & Tyler. Ronald Spencer, yet another New York lawyer, does the same “for pieces in the millions of dollars,” he said. “Is it conceivable that someone would just take an invoice?”

Welcome to the new world of high-priced art buying, where the traditional handshake and invoice is increasingly becoming a thing of the past, replaced by the handshake, invoice and a formal contract that runs for pages and covers every conceivable contingency. Driving this phenomenon is “a new group of collectors within the past 10 years, extraordinarily wealthy people, who are used to doing business in a certain way, used to getting their own way, and who like to spend legal money,” said Manhattan arts lawyer Susan Duke Biederman. One of her gallery clients was handed a contract for an art sale that reached 27 pages (she referred to that buyer as a “lunatic”), but an increasing number of the sales in which she has a part involve buyers and sellers who are accustomed to “passing everything through legal.”

Increasingly, art dealers and gallery owners find themselves confronted by ready buyers with lots of money and what may seem like a litigious outlook. “High-spending collectors do sometimes ask for something more formal than an invoice,” Ron Warren, director of the Mary Boone Gallery in New York, said. “Above $1 million, you kind of expect it now. These are business people who are used to contracts accompanying every sale they make. It is the same to them if they are buying or selling companies or artwork.” Another Manhattan dealer, David Nash, partner at the gallery Mitchell-Innes & Nash, characterized contract-waving buyers as “legalistic types,” and New York gallery owner Renato Danese claimed that “there is not so much trust in a dealer’s word and reputation anymore. People want it in writing, or there’s no deal.” An increasing number of dealers are finding that nowadays “this is how you have to do business,” said Ms. Biederman. “It’s fine for me. I make money.”

SOUNDS ANTAGONISTIC, but sometimes the addition of legal counsel is for the best. For instance, one of New York City arts lawyer Daniel Weiner’s art collector clients was ready to buy a Jackson Pollock for “something north of $11 million.” Mr. Weiner wrote up a contract and sent it to the gallery director “who screamed and yelled, ‘That’s not how we do things here. We have a reputation.’ I told her that if she wanted my client, this is what you’ll have to accept, because we wanted representation and warranties that the work was authentic.” That gallery director refused, “and we took our $11 million and went elsewhere.” Smart move. That gallery, Knoedler, closed in late 2011 in the wake of a cascading number of lawsuits alleging that it had sold buyers numerous fake Abstract Expressionist paintings.

Those who resent these contracts with all their conditions and liability waivers cannot just blame the buyers. Since the art market boom that led up to the 2008 recession, and its accompanying frenzied secondary, or resale market, some art gallery owners have been requiring collectors of certain artists’ works on the primary market to sign agreements assuring that, if resold, the works will be resold exclusively through those dealers. Andrea Rosen was an early adapter. “I have used these clauses on every invoice since I opened the gallery,” the New York gallery owner said. Artists may add their own conditions for selling artwork, such as James Turrell and Sol LeWitt, who both have demanded that those who own their work apply to them (in LeWitt’s case, his estate) for “transfer” documents, permitting the artists to approve or disapprove the sale to new owners. Buyers of the work of painter Richard Haas stipulate on the invoice that they will pay a 5 percent royalty (on the profit or just the sale price) to him if and when the artwork is resold. Both the South African artist Marlene Dumas and the Scottish-born artist Peter Doig want buyers of their paintings to agree to donate these pieces to museums, rather than putting them up for sale. When collectors have gone against their wishes, lawsuits have occurred. In 2010, Ms. Dumas directed galleries representing her work to refuse to sell any more of her paintings to a collector who sold one through a New York art gallery—he was on what was referred to as a “blacklist”—and that collector brought a lawsuit against that gallery in effect for snitching. (The suit was dismissed in a Manhattan federal court last year.)

Mr. Danese attributed the growing prevalence of binding contracts in the art trade to “conditions that have created cautionary behavior in collectors and sellers,” such as the use of an expanding number of middlemen involved in sales—including art advisers, who suggest what their clients might buy or sell and at what price, and “runners,” who identify artworks that may be available for purchase—who don’t hold title to the works of art and are not legally empowered to make sales. Many of these big-spending collectors haven’t made the time to actually examine in person the artworks they are buying but are relying on their emissaries to do what lawyers call “due diligence.” The benefit of the globalized art market is that buyers around the world have poured money into the purchases of artworks, elevating prices and the number of sales, buoying the financial picture for many art galleries in New York and elsewhere. The drawback, according to Ms. Laird, is that the purchase of art “may frequently occur between people who do not know each other well, in dueling and far-flung jurisdictions, and so is necessarily fraught with more risk, tension and some mistrust.” She added that well-publicized litigation, bankruptcies and criminal proceedings involving art dealers have made players more wary.