As you may have noticed, it’s been a wee bit nippy out lately. All over the country, temperatures are hitting record lows, and Weather.com is gunning for a Pultizer with headlines like “Dog Stays With Owner Despite Cold” and “Will the Snow Ever Stop?” For those of us not fancy enough to take cabs everywhere, New York City has transformed from a convenient, pedestrian-friendly metropolis into a frozen hellscape of delayed trains and frostbitten extremities. And you still have to get to work on time. Unfair!

There are many songs whose chilly imagery make them a fitting soundtrack for the polar vortex … the Icelandic post-rock of Sigur Ros, for instance. But their wintry majesty would belie the special type of degradation that winter in the city visits upon its citizens. Glittering fairylands are nice, but we need a song for when the magic of that first snowfall has given way to brown slush and gnarly wipeouts. A song for the third week in a row of being a human snot factory. A song for when cabin fever makes us punch the walls and say “fuck this shit!”

For me at the moment, that song is Eula‘s “I Collapse,” which was released as a digital single last year on God Mode Records. The verse’s plodding instrumentals create a deliberate sense of claustrophobia, which is punctured by singer Alyse Lamb‘s unhinged quaver. It’s not long before it all collapses—just like the title!—into a deluge of sludgy noise elicited by Lamb’s shrieked taunt “can you handle nasty weather?” Well, can ya? (Tentative answer: I can handle it so long as it continues to sound this good.)

Of course, it’s a metaphor for some kind of existential breakdown and not a comment on the actual weather, as the song’s angsty video would attest. The storm within, etc. A durable trope made new. So maybe after we’ve gotten our yayas out, we should take “I Collapse” as a reminder that there are worse types of “weather” to be had than this, and if actual, non-metaphorical snow is the worst of your problems, you are doing pretty okay.

For those unafraid to brave the elements, Eula is playing at Death By Audio Feb 1st. 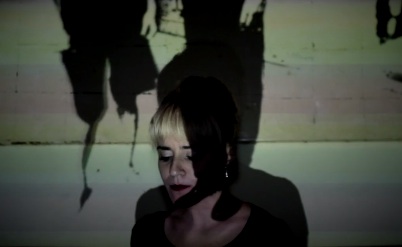