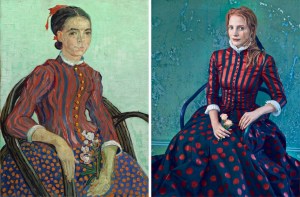 “[T]he idea of having Jessica Chastain morph herself into Ria Munk, by Gustav Klimt, or Flaming June, by Frederic Leighton, was in the works long before the art-fashion fusion hit the spring runways,” is a sentence that I, as a man who owns only two pairs of pants (one of which has a pretty poorly placed and rapidly expanding hole), only vaguely understand. (It comes from Anna Wintour’s editor’s letter in the December issue of Vogue.) But this being an art blog, and me being a person who is obliged to contribute to said blog, I feel it is only right–in fact, I consider a kind of duty–to call your attention, dearest reader, to this slide show of photographs of Jessica Chastain in poses influenced by a number of canonical artworks, with the canonical artworks in question juxtaposed alongside the photos. Did you see Zero Dark Thirty? That was a pretty good movie. How about Tree of Life? It had a dinosaur in it! I guess what I’m trying to say is: you’re welcome.

Filed Under: Arts, Art and Fashion