Newly-elected City Council Speaker Melissa Mark-Viverito and the Rev. Al Sharpton went after the media this morning, accusing the city’s news outlets of being out-of-touch with voters.

In her first major appearance since Wednesday’s vote crowning her the second-most-powerful elected official in the city, the progressive firebrand told Mr. Sharpton’s National Action Network in Harlem that this year’s election victories signaled a sea change in New York that the mainstream media resisted.

“Mayor de Blasio, Public Advocate Tish James, Comptroller Scott Stringer and now myself as the City Council speaker all are affirming and are an example of what the electorate has said they want, which is a new direction in the way that the City of New York in lead,” she told the crowd. “And despite all of the editorial content in the mainstream media that went against each and every one of us, we are standing. And that demonstrates that they do not have the pulse of where it is that the city wants to go.”

After thanking Mr. Sharpton for his support over the years, Ms. Mark-Viverito vowed to use her position to “fight on behalf of communities across this city that too often have been ignored and neglected.”

“This is our moment. We’re gonna take full advantage of it. Because at the end of the day, what we want to promote and what we want to enact is a city that’s going to be fair, that’s going to tackle the issue of inequality, which is too real for so many,” she said, asking for support from those gathered, “Because we see that there are interests to see that this vision does not succeed.”

In his introduction, Mr. Sharpton further bemoaned the media’s coverage of the races, and said that after Mr. de Blasio won the mayor’s race, heralding a new era of progressive leadership, “the media started attacking everything.”

“I mean, they just went crazy on Melissa. I told her in the back I hope she never drove across the George Washington Bridge or they’d have her up in the bridge scandal in a minute. I mean just anything,” he railed, drawing laughs for his reference to the Chris Christie scandal. “De Blasio eating pizza with a fork, that’s a scandal. I mean, just anything.”

Ms. Mark-Viverito was the subject of numerous negative news stories in the final stretch of the race focused on her finances, including her admitted failure to disclose $92,000 worth of rental income and her refusal to release her tax returns until last night. The New York Post also hammered her on her involvement in various leftist causes, incuding her lobbying on behalf of the “Cuban Five” and her support for Bolivia’s “socialist and anti-American” President Evo Morales.

“You understand, if you’re out here, that’s what they’re gonna do. If nobody is mad at you, it means you’re not doing anything … And if you get in the ring you gonna get hit,” he said, praising the new speaker’s resolve.

“Melissa’s got that kind of endurance, that kind of courage, that kind of staying power … Why? ‘Cause she believes in what she’s doing … You have to respect people that believe in what they doing. I’m so sick of phony politicians that say anything anywhere,” he said, noting that even former Mayor Rudy Giuliani–with whom he bitterly clashed–was at least consistently “wrong all the time.”

Mr. Sharpton further revealed that he was first introduced to Ms. Mark-Viverito by Mr. de Blasio’s close confidante, top political operative and current U.S. Ambassador Patrick Gaspard. (“You’ve got to go to East Harlem to campaign for Melissa” Mr. Gaspard allegedly told him.) Mr. de Blasio has been criticized for his unprecedented involvement in the speaker’s race. 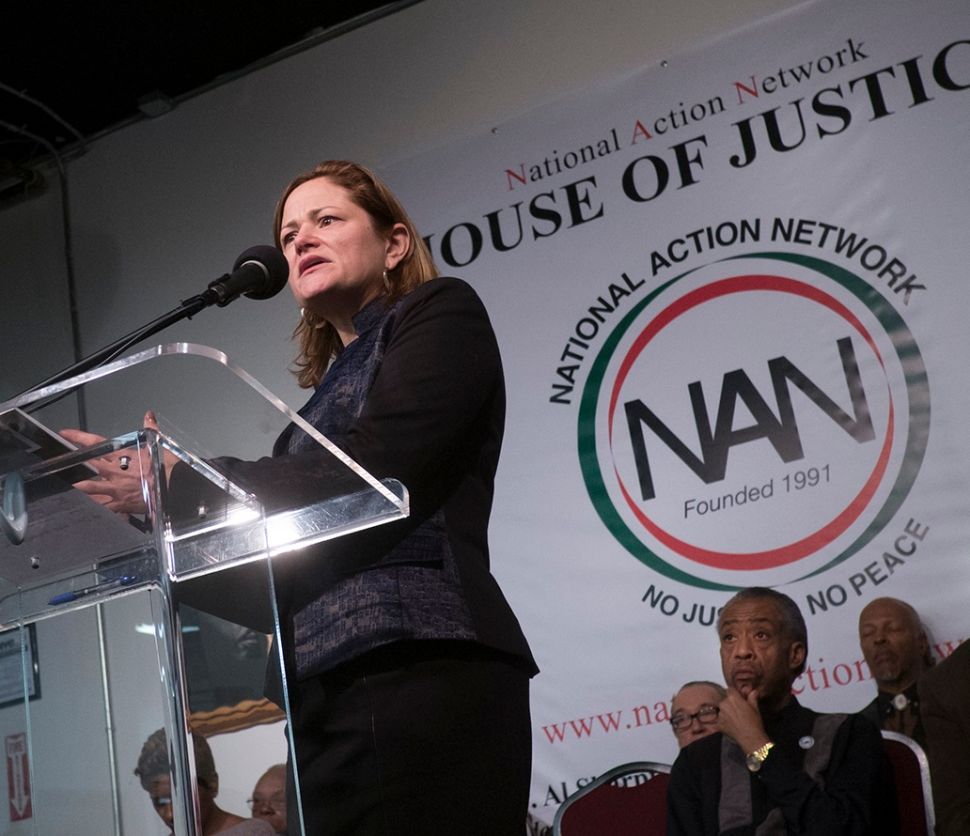