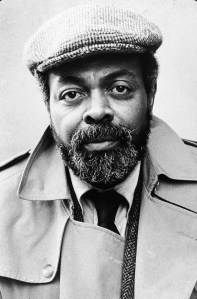 As you may have heard, the storied poet, playwright and activist Amiri Baraka died today died today at the age of 79, after being sick for some time. The Los Angeles Times has published a full obituary.

Mr. Baraka, who was born Everett Leroy Jones (his early writing was done under the name LeRoi Jones; he changed it to Amiri Baraka in 1967), had recently been enjoying some popularity in the art world. For Performa 13 last November, Rashid Johnson staged his two-person 1964 play Dutchman at the East Village’s Russian & Turkish Baths, rendering the emotionally and physically overwhelming play, which follows a subway flirtation between a black man and a white women, even more brutal by situating it in three very hot rooms.

And “New Jersey as Non-Site,” a show focused on work by artists in New Jersey from 1950 to 1975, which just closed the Princeton University Art Museum, had a section devoted to the Black Arts Movement that Mr. Baraka helped led in Newark and New York in the 1960s. The exhibition included a clip of his Bedford Stuyvesant-based LeRoi Jones Young Spirit House Movers and Players appearing on television in 1968. It’s pretty amazing, and follows below.