Mayor Bill de Blasio strode into his first emergency storm briefing like a brigadier leading his newly-sworn-in troops to battle to confront his first real crisis: an impending snow storm on Day One.

“We can take on any storm, anywhere,” he’d declared hours earlier. “Before you even think about the politics or anything else, the bottom line is it’s our job … First thing we do, we protect people’s lives, we keep the streets safe and clear.”

For Mr. de Blasio–who comes into office with limited management credentials and no executive experience–the snow provides a unique opportunity for the new mayor to prove he’s got governance chops, straight out of the gate.

“There’s all of this stuff about he doesn’t have managerial experience, he doesn’t have managerial competence, the city’s gonna fall apart … If he gets the snow off the street, he blows a lot of that away–at least for the time being,” Ken Sherrill, a professor emeritus of political science at Hunter College, told Politicker. “It’s tremendous opportunity. And you know, I’d be surprised if he didn’t know it.”

Indeed, Mr. de Blasio seemed to relish the opportunity to fully flex his new mayoral muscles, as he skirted between emergency briefings and press conferences.

“It would have been nice to have a nice, calm first day, but we have snow on our mind. And we are focused like a laser on protecting the people of this city and getting everyone ready,” he told reporters at 1 Police Plaza, after swearing in his new police commissioner. “We feel absolutely confident of the city’s preparations. We’re going to be ready for whatever comes.” Then came a meeting with his top deputy mayors and commissioners in the Office of Emergency Management’s official-looking situation room, followed by his first televised emergency press conference at the agency’s headquarters in Brooklyn. Speaking slowly and carefully, reading from bound and laminated briefing notes, Mr. de Blasio ran through a long list of instructions (stay inside, check on neighbors) and statistics (number of snow plows, miles of city roads covered).

As he spoke, he was flanked by his new team, which happened to include a cast of holdovers from the Bloomberg administration: familiar faces including OEM Chief Joe Bruno, Fire Commissioner Sal Cassano and Sanitation Commissioner John Doherty.

“I had my first opportunity today to talk to each commissioner about the work they’re doing. We obviously did not expect to have this situation as our first staff meeting. But I have to tell you how impressed I am and how proud I am of each commissioner and each agency that swung into action very quickly, very comprehensively, to deal with this crisis,” he said, offering enthusiastic praise for the men hired by his predecessor, dubbing them his “dream team.”

“This command center is a marvel,” he later said after touring OEM. “When you see the state of readiness and professionalism of the team, it’s really a credit to New York City that there’s such a capacity here.”

There is a long trail in history of mayors who failed to plow city streets and suffered badly as a result. John Lindsay’s administration was “nearly brought down” by the weather in 1969. A Chicago mayor once lost his re-election bid because of his own lackluster efforts. Most recently, former Mayor Michael Bloomberg’s third term was badly marred by the 2010 post-Christmas storm. Mr. Bloomberg didn’t exactly help his own case; he infamously told immobilized New Yorkers to “take in a Broadway show” and reports surfaced indicating he was out of town in Bermuda as the blizzard approached.

“It was one of the low points in terms of Bloomberg’s out-of-touch image … and he learned that lesson,” Mr. Sherrill said.

Mr. de Blasio was among Mr. Bloomberg’s critics three years ago but said that wasn’t on his mind yesterday “I don’t feel we have to get this right because of my past criticism, I feel that we have to get this right because I’m mayor of the City of New York and because we’re all devoted to protecting our people,” he told reporters. “We have to get it right. There’s no question about it. And that’s why there is extraordinary readiness here. We’re not taking anything lightly.”

Although this is Mr. de Blasio’s first major challenge in office, his circumstance could also aid him, one former city official told Politicker. The new mayor is about to start contract negotiations with more than 150 municipal unions, which have all been working on expired contracts and are itching to curry favor to earn a good deal. Harry Nespoli, who heads the Municipal Labor Committee umbrella group, also happens to head the sanitation workers’ union.

“Bill de Blasio has historically unique leverage,” the former official said. “It certainly gives the chairman of the municipal labor council an incentive to deliver great service from his members, who,” he was sure to stress, “of course always do a great job.” 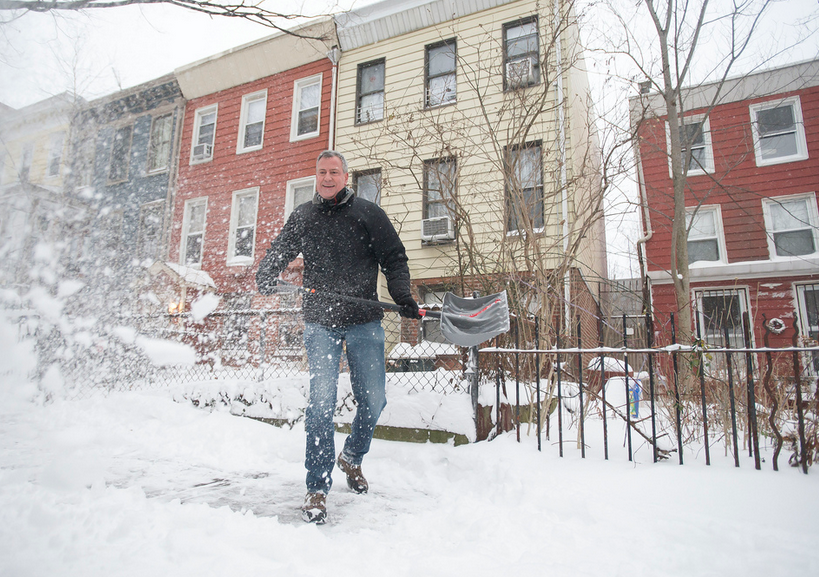