NEWARK – Amidst the plethora of names hurled into the mix on the day when candidates pick up ballot petitions in New Jersey’s largest city, one name stands out: Newark’s current mayor.

South Ward councilman and Newark mayoral candidate Ras Baraka told PolitickerNJ.com that he is in discussions with Newark Mayor Luis Quintana to join his mayoral slate for the May election.

“We’re putting it together,” Baraka said in the jammed hallway outside of the City Clerk’s office as Newark’s politicos filed in. “We’re going to have a rally next week when all of the people on the ticket are going to announce. Luis is going to do what he thinks is best for the city. When we have our rally, everybody will be there.”

Baraka confirmed that John Sharpe James, currently councilman-at-large and the son of former Mayor Sharpe James, has joined his ticket as the South Ward candidate, as reported on Monday by PolitickerNJ.com. Baraka also verified that Alturrick Kenney is also on his ticket as an at-large candidate.

A host of other candidates present outside of the City Clerk’s office confirmed their positions on Baraka’s slate on Monday. These candidates include Councilwoman Mildred Crump (at-large), Patrick Council (at-large) and Joseph McCallum (West Ward).

Councilwoman Crump elaborated on the behind-the-scenes negotiations taking place between Quintana and the Baraka campaign.

“We’re saving a seat for him,” Crump said in reference to Quintana, who was sworn in as mayor in November 2013 following the departure of former Mayor Cory Booker for the U.S. Senate. “[Quintana] said that he wants to come back [to the council]. He and Councilman Baraka have been working together, even during [Quintana’s mayoral] transition. This should all be worked out by the end of the month, if that long. Our ticket is almost complete.”

The mayor could not immediately be reached for comment. 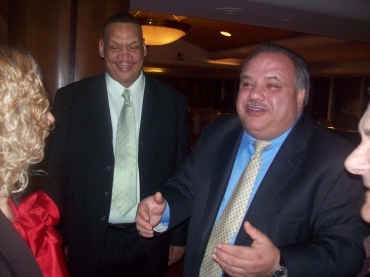