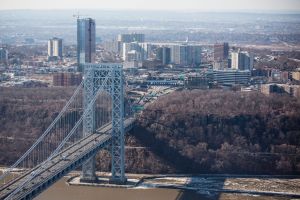 FORT LEE, NJ – JANUARY 09: The New Jersey side of the George Washington Bridge, which connects Fort Lee, NJ, and New York City, is seen on January 9, 2014 in Fort Lee, New Jersey. New Jersey Governor Chris Christie is currently caught in a political scandal, in which one of his aides ordered The Port Authority of New York and New Jersey to purposely cause traffic jams at the on-ramps to the George Washington Bridge in Fort Lee, NJ, due to political disagreements between Governor Christie and the mayor of Fort Lee. Christie claims he had no knowledge of issue and has since fired the aide. (Photo by Andrew Burton/Getty Images)