At the very end of a detailed press update this morning at a sanitation garage in Queens, the newly-minted mayor was asked how many layers he was wearing by CBS radio reporter Rich Lamb.

“Do you want me to go farther, Rich?” he offered suggestively with a smile. “I have an undershirt also.”

The move from Mr. de Blasio–whose corny sense of humor has become a source of amusement for the press–drew hearty laughs from the crowd, including a crew of sanitation workers and two dozen-or-so reporters, who looked at each other in disbelief.

Mr. de Blasio proceeded to zip back up his jacked, but–according to video of the event captured by NowThis News–unzipped it again to offer photographers another chance to grab the shot as he struck a pose, laughing.

“Yes, this is what I’m wearing now. When I went out to shovel, it was this plus a sweater,” he said, zipping back up his jacket.


Asked if he was cold, Mr. de Blasio, who had boasted of shoveling his own driveway earlier this morning, said he’d been plenty warm while clearing snow.

“When you’re shoveling–shoveling is a fine form of exercise, let me just tell you. I didn’t have to go to the gym today,” he said. “So during the shoveling, no. Cold was not my challenge. My back was my challenge. But it worked out.”

See a video of the exchange below courtesy of NowThis News: 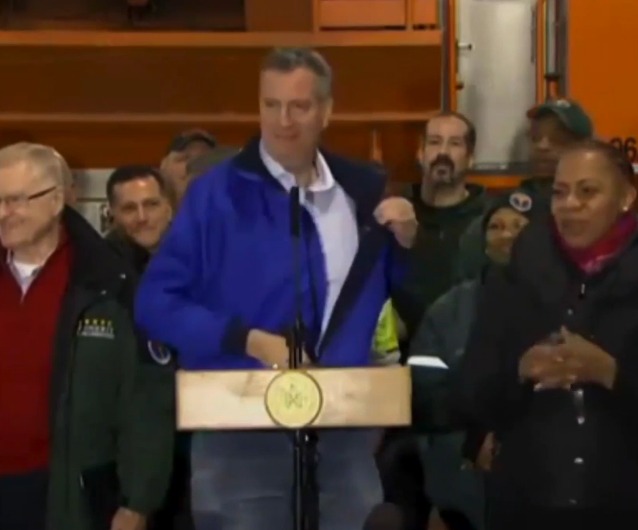