I can’t remember how many years it’s been since I last saw a David Parsons program or what I saw whenever it was, but that isn’t surprising, since I can’t really remember the first half of a David Parsons program while I’m watching the second half. If Parsons were worse than he is, things would be easier to understand: A debacle is far more memorable than mere blandness. Alas, the typical Parsons piece is generic, derivative, respectable—mind-emptying.

But that isn’t true of his most famous effort, Caught (1982), a strobophonic (if that’s the word) specialty solo in which a bravura dancer, on a pitch-dark stage, is “caught” is a series of white flashes as he leaps across the stage, apparently never touching the ground. He’s so fast, and the flashes come so quickly, that at times you think he’s just running on air. It’s staggering, and though it’s corny, it’s valid: This is technology brilliantly deployed in the service of honest bravura dancing. No wonder audiences are bowled over! Caught is Parsons’ calling card, the way, with equal justice, the Ailey company’s Revelations is theirs.

Gender-choice programming was also a feature of Robert Battle’s The Hunt, which we’ve been seeing recently at Ailey where it features six bare-chested males in long, slit, black skirts with red underlining. Battle was a dancer with Parsons for half a dozen years through the late ’90s and made The Hunt for him in 2001. Parsons gives us a choice: four bare-chested males or four more modestly costumed females. (There can’t be six of either variety, because the entire company consists of four men and four women). I saw the women—strong and assertive as they perform this hybrid of ritual hunt and disco moves. Wham, wham, bang, bang—the implacable law of diminishing returns asserts itself all too quickly.

There was a new piece by Parsons, The Introduction, whose point seems to be the introduction of the company to the audience in a group effort during which each of the eight is given his or her moment in the spotlight. Like most of Parsons’ efforts, this one has no discernible shape, let alone structure, and no originality of any kind. It’s just lazy.

Far more interesting, and actually memorable (partly because of the Stravinsky score), is Brothers, a piece Parsons made together with Daniel Ezralow back in 1982, when they were both superb dancers in Paul Taylor’s company. (To get a sense of how beautiful a dancer Parsons was, take a look at him and Ezralow in the YouTube posting of Brothers.) The two guys do all the brother things—the competing and the loving, the assertion of independence, the dependency. They strut, they jab, they needle, they collapse into each other’s arms. None of it is original—you can see the line back through Taylor to Graham, with an odd touch of the two servants in Balanchine’s Prodigal Son—but it’s effective. Spring and Vaughn, who dance it in the current season, which runs at the Joyce until Jan. 26, aren’t on the level of their precursors, but they’re perfectly fine.

Two other Parsons works round out the program. Kind of Blue (to “So What” by Miles Davis) is for two couples, and I don’t remember a thing about it—sorry! Finally, Nascimento Novo, for the entire company, is a Latin-inflected romp that’s an honest reflection of Milton Nascimento’s cheerful music, with lots of percussion and swirl, no structure and no harm done. Would I mind seeing it again? No. If I saw it again, would I remember I’d seen it before? Probably not.

Next, Ballet Next, the small company started three years ago by ex-principal dancers Michele Wiles (ABT) and Charles Askegard (City Ballet). The first two seasons were inauspicious, but this third one has been interesting, because instead of spreading itself over an uneven repertory, it’s focused on a single talented choreographer. Brian Reeder, who danced for City Ballet, William Forsythe and ABT, began choreographing a number of years ago—for ABT, among other companies—and showed us a string of intelligent, musical and often witty pieces. None was major, all were engaging. Now Wiles (Askegard has vanished without a trace from Ballet Next) has programmed three works by Reeder that demonstrate the range of his talent.

Different Homes (to Britten’s “Cello Suite no. 1”) is a fraught duet for Wiles and Jens Weber. A one-time principal dancer at the Berlin Ballet and the Ballet de Monte Carlo, Weber dances in a highly dramatic European way (he has been studying acting), but he’s a good contrast and complement to Wiles’ somewhat unusual classical style. This piece is highly Balanchine-inflected without being pastiche—and it’s no crime to create a ballet that couldn’t have existed without Balanchine’s pioneering Four Temperaments and Agon. Reeder is very attentive to the Britten score (handsomely played by Elad Kabilio), and although there’s no strong through line to the ballet, we know enough by the end to understand why this man and woman, clearly in love, separate for their “different homes.”

The centerpiece of the program was a semi-story called Picnic, a muted and condensed version of the film Picnic at Hanging Rock, based on a mystery-laden Australian novel about the disappearance of several nice Victorian girls and one of their schoolmistresses who vanish from a quiet picnic and are never found. The teacher is played by Wiles, whom we first see seated on the ground in an Alice dress observing the others. The four girls cluster in twos and threes and dance together chastely; Wiles and a young man (Weber again) wander through the scene, interacting with the girls, until eventually he gently propels them out of the scene and into …what? The ballet doesn’t tell us, just as the movie and the novel don’t. The music is for cello again (Shostakovitch’s “Cello Sonata in D Minor”), and the pretty period costumes are by Elena Comendador. The ballet is less edgy, less eerie than the movie: The effect is very much in the vein of Antony Tudor’s Leaves Are Fading, romance tinged with regret.

The final piece, Surmisable Units—a world premiere—was the most stimulating. A pianist (at the performance I attended, Juan Carlo Fernández-Nieto) sits on a small bench at the apex of a V formed by two grand pianos, one hand on each piano, playing Steve Reich’s complex and challenging “Piano Phase.” His bravura performance might have overwhelmed the dancing, but Wiles and her group—in particular, the beautiful Kaitlyn Gilliland, who melted away from City Ballet a few years ago, after showing great promise—have been given passages of movement that are inventive and at times compelling.

What Reeder shows us is a distinctive imagination, a strong response to music and a sophisticated vocabulary of steps. Is this great choreography? It isn’t, but it’s more valid than most of what we see from most ballet companies in their desperate search for repertory. If the School of American Ballet, or Juilliard, were to commission work from him, he would do them proud.

As for Wiles, she was front and center in all three ballets, and that was overkill (as well as leading to interminable intermissions). She’s too quirky to be so ubiquitous. Let’s hope that she continues to expand her company’s horizons, not only with worthy repertory but with other ballerinas with whom to share the honors. 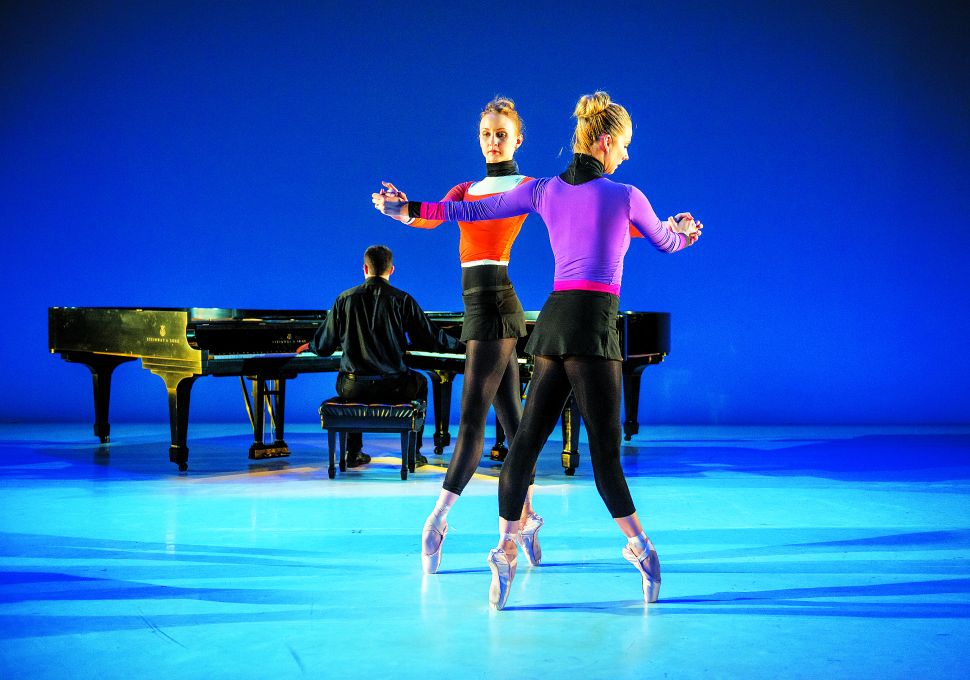