Is it a traveling petting zoo? A runaway circus? A desert caravan that got very, very lost?

Brooklyn residents were baffled when a flock of animals took to the wintery streets this Sunday. But these wandering animals weren’t escapees from a bizarre urban farm. The three camels, the group of goats, and the very confused donkey were braving the cold for Brooklyn’s Three Kings Parade, hosted by El Museo del Barrio.

The parade, which wound through the streets of Greenpoint and Williamsburg, commemorates the journey of the three wise men to meet the infant Jesus. As the camels took their own journey through Brooklyn, they left a trail of stunned onlookers and incredulous tweets in their wake.

The Three Kings Parade, currently celebrating its 37th year in the city, draws annual crowds for its Latin music, colorful costumes, and traditional dancing. But some of the parade’s best reactions came from its accidental participants.

Photo: And then there were #camels in #Brooklyn http://t.co/NceVG9D2ps

FYI there are legit camels in williamsburg rn pic.twitter.com/zDIdpDULar

Greenpoint may have had exotic camels for the weekend, but the East Village will always have its squirrels. One Tompkins Square Park squirrel upgraded from acorns to pizza, feasting on an abandoned slice this weekend. EV Grieve has pictures of the furry pizza thief. 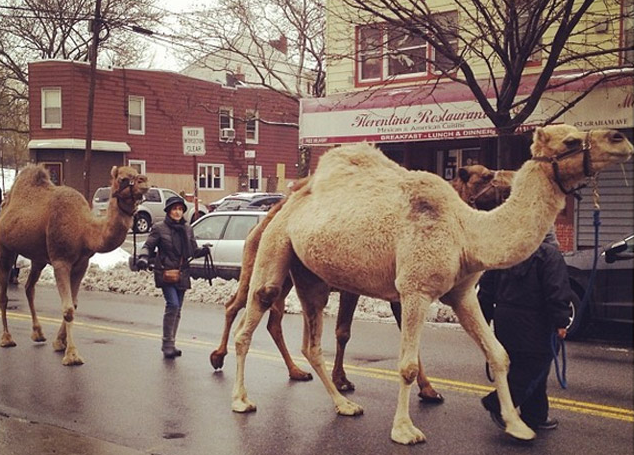