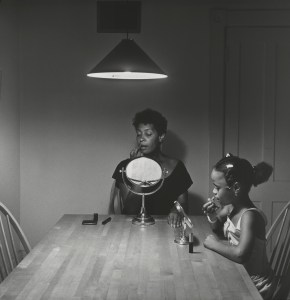 Last week, in a feat of inept timing, a magazine published, on Martin Luther King Day, a photograph of the pert Russian art collector Dasha Zhukova posed on a Bjarne Melgaard chair crafted to resemble a voluptuous and supine black woman.

It so happens that later in the week the Guggenheim opened a retrospective of the work of Carrie Mae Weems. The exhibition, curated by Kathryn Delmez, surveys the MacArthur Grant-winning artist’s 30-year career, over which she has contributed considerable thought to the place of the black, female body in American life and art.

Starting with her Cal Arts M.F.A. thesis, Family Pictures and Stories (1978-84), which exhibited images of her own family, Ms. Weems created staged photographs paired with text responding to stereotypes about black life. Her career begins with verve and humor. Her tongue-in-cheek 1987-88 photograph series Ain’t Jokin contains an image of a young black woman looking in the mirror; a gauzy white witch appears before her. The caption reads, “Looking into the mirror, the black woman asked. ‘Mirror, mirror on the wall, who’s the finest of them all?’ The mirror says, ‘Snow White, you black bitch, and don’t you forget it!!!’”

Haunted and handsome black-and-white photographs track Ms. Weems’ melancholy exploration of the legacy of the trans-Atlantic slave trade in West Africa and the American South in the series Sea Island, Slave Coast and Africa, from the early 1990s. On the exhibition’s second floor, images investigate the relationship between color and black vernacular descriptions of skin tone (Golden Yella Girl; Blue Black Boy, both 1990-97) and between the black body and art history. “I was clear I was not Manet’s Type” is the caption of a self-portrait of Ms. Weems’ nude body from 1997. A series of appropriated 19th-century anthropological photographs combined with text, From Here I Saw What Happened and I Cried, a 33-image poem about American slavery, is the pinnacle of Ms. Weems’ involvement with American history. 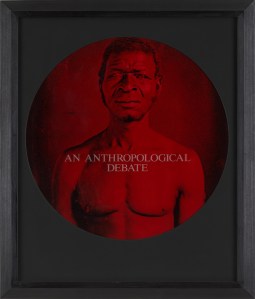 In the 2000s, she takes flight, turning to video and staged self-portraits created during residencies in Rome and Cuba. New air and light enter the dialog. Yet if these works take on increasingly high production values, a gritty, irreverent fun from the early days is gone, replaced with the formal gravitas and poise of an elder stateswoman at work on issues of great importance.

Ms. Weems’ meditations on race, gender and class find an unlikely but welcome home in our self-described “Museum of Non-Objective Painting.” The Guggenheim’s photography curators seem to have the pulse of influential American “identity politics” photographers of the late 20th century, with this show following last year’s survey of cult feminist photographer Francesca Woodman.

In Ms. Weems’ photographs, she is a larger-than-life character actor, playing sweeping, mythic roles; the part suits her. Yet it would be great to see her work curated in relation to artists like Cindy Sherman, as well as young contemporary artists like Wu Tsang, LaToya Ruby Frazier and K8 Hardy. Ms. Weems studied dance in San Francisco with Anna Halprin in the 1970s and dated Mike Kelley while she was a student at Cal Arts; it’s hard to imagine these artistic influences and exchanges when we persist on seeing black artists as only speaking to black concerns. New York saw a number of shows looking explicitly at art by black artists last year: “Now Dig This!” at P.S. 1, “Radical Presence” at both NYU’s Grey Art Gallery and the Studio Museum in Harlem and to a certain extent “Blues for Smoke” at the Whitney. Perhaps the idea that blackness equals separateness has run its course, though, and major voices such as Ms. Weems’ will increasingly be included in exhibitions that frame the consideration of black identity as more than a special-interest concern.