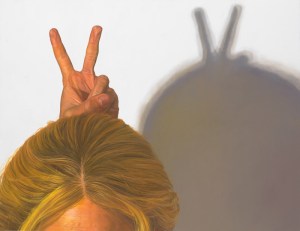 Named for the Abstract Expressionist, the prize honors “a mid-career American artist devoted to the pursuit of excellence and innovation in painting,” and comes with $25,000. Full release follows.

New York, NY – January 23, 2014] – The Estate of Robert De Niro Sr. announced the winner of the Robert De Niro Sr. Prize which focuses on a mid-career American artist devoted to the pursuit of excellence and innovation in painting. Award winner Catherine Murphy will receive this year’s $25,000 prize administered by the Tribeca Film Institute (TFI) for her considerable contribution to the field of painting. Murphy is the third recipient of the merit-based prize, which pays tribute to the work and legacy of accomplished painter Robert De Niro Sr.

“I am honored to present Catherine Murphy with this award for her outstanding work as a painter and teacher, and to continue to honor my father as an artist through the Robert De Niro Sr. Prize,” said Robert De Niro.

In praising her work, the panelists jointly stated, “Catherine is devoted to painting. She takes a long hard look and sees things that others would have missed. Her work is seemingly absolutely consistent and yet it is surprising in each individual iteration. It is very much about the process of painting.”

Currently living in Poughkeepsie, New York, Murphy studied at Skowhegan School of Painting and Sculpture in Maine and received a BFA from Pratt Institute in Brooklyn in 1967, where she was also awarded an honorary doctorate degree in 2006. Murphy has also been distinguished with National Endowment for the Arts Grants (1979 and 1989), a Guggenheim Fellowship (1982) and as a member of the American Academy and Institute of Arts and Letters (2002). She was a Senior Critic at Yale University Graduate School of Art for 22 years and is currently the Tepper Family Endowed Chair in Visual Arts at the Mason Gross School of the Arts at Rutgers.

Catherine Murphy’s work has been the focus of museum exhibitions, from her first in 1976 to a recent exhibition at the Byrdcliffe Kleinert/James Center for the Arts in Woodstock, New York. Works by Murphy are in important private and public collections, including Whitney Museum of American Art, the Museum of Modern Art, the Art Institute of Chicago, and the Thomas Olbricht Collection, Berlin.

Murphy’s recent paintings and drawings show a profound interest in depicting common surroundings that usually escape our notice but nevertheless influence our perception: a pile of dust or the stains found on a wall shift views usually unseen to become images that demand our full attention. Murphy does not work from photographs but, instead, directly from objects staged in her studio to recreate mental images drawn from memory and dreams. Her practice requires intense dedication to each work, a prolonged process that can take months, sometimes even years. The choice between drawing or painting is, as the artist explains, determined by the subject itself, giving painting and drawing the same importance within the artist’s oeuvre.