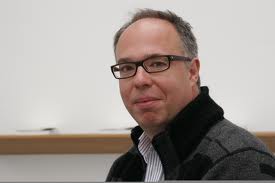 Charles Esche, the director of the Van Abbemuseum, in Eindhoven, the Netherlands, has been selected to receive the Center for Curatorial Studies at Bard College’s 2014 Audrey Irmas Award for Curatorial Excellence. Mr. Esche will get the award, which comes with a $25,000 check, at a gala in New York on April 2, with New Museum curator Lauren Cornell doing the honors.

Here’s a bit about Mr. Esche, who’s on tap to organize this year’s São Paulo Bienal, from CCS Bard’s release:

Since 2004, Esche has been Director of Van Abbemuseum. In 2010, he established the L’Internationale confederation together with 6 other European museums from Istanbul to Madrid. The initiative aims to construct a pan-European modern and contemporary art institution by 2017. Between 2000 and 2004 he was the Director of Rooseum Center for Contemporary Art in Malmo, Sweden. Before that Esche was at Tramway, Glasgow (1993-97) and founded the proto-academy in Edinburgh (1997-2001).

He is co-founder and co-director of Afterall Publishing with Mark Lewis. Afterall is a contemporary art publisher, which was launched in 1998 and is based at Central Saint Martins, University of the Arts London.