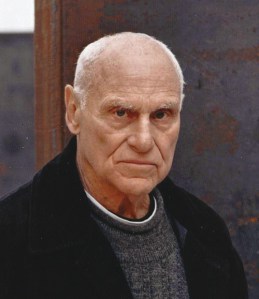 Over the holiday break, Richard Serra, who currently has a major exhibition at two of Gagosian Gallery’s locations in New York, made an appearance on Charlie Rose’s talk show. Who knew such strange things happened when the savant sculptor of steel converses with the Carolinian cornerstone of public broadcasting?

At first, Mr. Rose tries to steer the conversation toward talking about Mr. Serra’s work symbolically. Mr. Serra, having none of that, merely describes the process of installing his massive new sculptures made of solid steel plates: “I actually set it up in New Jersey in wood to make sure I knew what I was doing, because you don’t want to order tonnage like that and not know what you’re about. And it took a lot of precision to get it into the floor. At one point, we had to dig up the floor because of Hurricane Sandy to make sure the bedding underneath the slab was still stable.”

Mr. Rose then busts out the big guns with an archetypal Charlie Rose question that is simultaneously unanswerable, kind of unnecessarily combative and a little profound.

Mr. Rose: “If you’re Richard Serra, are you competing against yourself?”

And so on. Mr. Serra is remarkably literal in talking about his work, focusing on form, dimension and how an object takes up a given space. (“The plates are 8 inches thick, and they’re 10 feet high and 40 feet long.”) He remains calm in a way that can only be described as “poetic.” But eventually, Mr. Rose becomes hung up on getting Mr. Serra to admit that one of his new sculptures “looks like a cemetery.”

Mr. Serra: “I don’t think it looks like a cemetery.”

Mr. Rose: “But people have said it looks like a cemetery.”

Mr. Serra: “Well, that’s O.K. … It’s supposed to be about the psychological presence you feel when you’re standing in a room. Maybe that’s why you related it—or someone related it—to a cemetery.”

This back and forth goes on for some time, culminating in Mr. Rose taking a coffee mug and a glass of water and placing a piece of paper on top of them and asking, “So what is this? What is that?”

Mr. Rose: “A bridge! Really? That’s not what I thought it meant. I thought it was a piece of art in which it had ceramic and glass and paper.”

Mr. Serra: “The paper’s a bridge between the two glasses.”

Mr. Rose: “But if you [say] that, then you’re limiting yourself!”

Mr. Serra: “Well, you asked me actually what it was. For sure, this is a cup and a glass and a piece of paper, but you asked me how I see it as a sculptor. I say it’s a bridge.”

To which, of course, Mr. Rose asks of his little creation, “Is this art?” Can’t make this stuff up. Watch the full video below.