City Council Speaker Melissa Mark-Viverito and her fellow members grilled Mayor Bill de Blasio’s pick to lead the city’s Department of Investigation today, perhaps defying the council’s sharpest critics who have accused the body of being too close to the new mayor.

The pick, Mark Peters, is Mr. de Blasio’s longtime friend, Park Slope neighbor and former campaign treasurer–raising questions as to whether he’s the right person to lead the DOI, which will be charged with investigating the new administration. According to the city charter, the council must approve Mr. de Blasio’s pick. They are scheduled to vote on the matter next Tuesday.

At his council confirmation hearing today, Mr. Peters directly faced a number of questions about his close relationship with the mayor, including from the speaker.

“The first question that would easily come to mind is the issue of independence of you in this position, in light of your relationship with the mayor,” said Ms. Mark-Viverito. “We take that obviously very seriously.”

“Obviously I’ve known for the mayor for many years. We served together on a community school board in the late 90s and I served as the treasurer for his mayoral campaign for several years. I do not believe in anyway that will impact my ability to be independent, Speaker Mark-Viverito,” responded Mr. Peters, who once served in the public corruption unit at the New York State Attorney General’s office. “I’ve spent virtually my whole life in law enforcement and good-government work.”

He cited his work fining ex-Gov. David Paterson despite their personal friendship and close working relationship. (“I danced at his wedding,” Mr. Peters recalled.)

Other members pressed even further. Councilwoman Inez Dickens pulled out a City & State op-ed, written by the paper’s editor, calling the choice “troubling” and suggesting that, if Mr. Peters is appointed, a “shadow of doubt will be cast across the office as long as Peters is its head.” Ms. Dickens said the article “does raise serious issues.”

Councilman Jumaane Williams also pressed, asking, “What do I tell my constituents about the appearance of partiality with someone who hasn’t even been gone for 30 days from pretty high level positions in the de Blasio administration?” He also said he was “troubled” when Mr. Peters said Mr. de Blasio would have “significant input” into his pick for a new monitor for the NYPD. Councilman Dan Garodnick inquired, “How close is too close here?”

“I have a demonstrated record of independence,” Mr. Peters insisted to Ms. Dickens, often repeating the point. But in some of his answers, Mr. Peters nevertheless reminded members of his continuing closeness to the mayor. And in response to Mr. Garodnick’s questions, Mr. Peters could not name a single case in which he would recuse himself from an investigation into the new mayor. 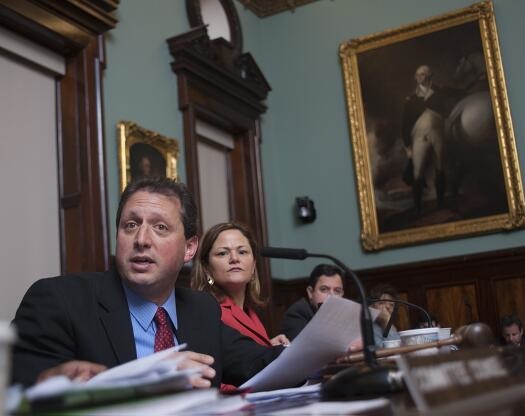