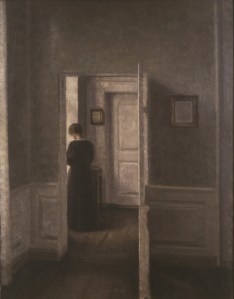 ‘Interior with a Woman Standing’ (undated) by Hammershøi. (Courtesy the Loeb Collection and Scandinavia House)

Serving as ambassador to Denmark in the early 1980s, John L. Loeb Jr. became an aficionado of the country’s art and began collecting it in depth. Happily for art lovers, he regularly loans parts of his collection to museums. This latest show, organized by Patricia G. Berman and Thor J. Mednick, is a succinct history of figurative Danish painting, from the very end of the 18th to the early 20th. Danish artists traveled and remained in close contact with their peers in other countries throughout the period, and this exhibition of 37 works begins chronologically with the studied realism that was being made throughout in Western Europe around the turn of the 19th century, with a scene of Diogenes by Nicolai Abraham Abildgaard and a portrait of a Chinese man by Jens Jørgensen Juel. Academic still lifes and portraits (such as a still-scintillating young woman undressing by Joel John Ballin) followed in the early 1800s.

The plot thickens in the 1860s, as news of Impressionism reached Copenhagen, which had been rocked by its recent loss to Prussia and Austria in the Second Schleswig War. Politicians and the culture industry amped up nationalist sentiments, exemplified by a brushy flag-filled street scene by Otto Bache that will please Childe Hassam fans and a Rockwell-esque young girl by Christen Dalsgaard who studies in a room that glows pink, as though from her good-natured labor. It’s a bit of kitsch that Jeff Koons has to wish he dreamed up.

As a descendent of Scandinavians, I am pleased to report there is no shortage of angst and stoicism here, particularly in Michael Ancher’s impressively dreary paintings from the early-20th century of humorless people laboring in potato fields or knitting. But the real highlight is seven works, mostly interiors, by Vilhelm Hammershøi, whose work was the subject of an exhibition at the Guggenheim in the late ’90s. Most show his expressionless wife in a plain black dress and a white apron in austere gray rooms, arranging flowers, setting down a cup or taking a long look into a courtyard below. Inspired by Dutch Golden Age painting, they convey an existential dread that feels achingly contemporary.