One is threatening to kill his newly-elected disciple’s signature campaign promise to raise taxes on the wealthiest New Yorkers to fund universal pre-K.

The other is trying to out-maneuver his old boss–one of the slickest political operators in the state–in a power play that has become the dominating drama of the post-election political season.

But today, Gov. Andrew Cuomo and Mayor Bill de Blasio did their very best to show reporters just how close they remain nonetheless, giving a buddy-buddy performance at a joint Albany press conference on hospital closures that could have earned them an award for politics’ best bromance.

With handshakes, laughter and shoulder pats, Mr. Cuomo introduced his “friend” Mr. de Blasio, who had just finished delivering his first testimony in front of the state legislature, during which he spent most of his time urging lawmakers to side with him over the governor.

“I’m very excited about the new mayor. I’m excited about the potential for the city and the state,” said Mr. Cuomo. “I’ve known this mayor for long, long time. We use the word ‘friend’ in politics often and sometimes casually, but the new mayor of New York truly is a friend, in the deepest sense of the word. We go way back. We worked together on the professional level. Personally we’re friends.”

Mr. de Blasio was equally as effusive: “Next spring, spring 2015, marks 20 years of knowing each other, 20 years of working together. And I have to tell you it has been an extraordinary experience,” he said of the governor, under whom he worked when Mr. Cuomo was running the Department of Housing and Urban Development in the Clinton administration.

The press conference had been called to pressure the federal government to grant the state a Medicaid waiver to provide new funding to transform Brooklyn hospitals, including Long Island College Hospital, which has been on the brink of closing for months. The two stressed that they were eye-to-eye on the issue and continued joking as they took questions from the press, asking one another for the low-down on certain reporters in the room. “Ken Lovett. Daily News,” the governor informed the mayor at one point, referring to the paper’s Albany bureau chief.

“Is your security is dealing with him or mine?” quipped the mayor.

But quickly, the questions turned to the two men’s disagreements on how to fund Mr. de Blasio’s universal pre-K plan. Mr. de Blasio has continued to press for his tax, while the governor insists he’s willing to provide near-unlimited funds from elsewhere in the state budget during an election year when lawmakers aren’t inclined to approve tax hikes.

Mr. de Blasio then stepped in to commend the “coordination, communication [and] cooperation between the city and state,” and downplayed the difference of opinion between the pair.

“Guess what guys: Once is a while we may have different perspectives. But we’re going to work it through in a lot of different ways because we have a lot of fundamentally shared goals,” he said. “I never have a problem with the notion that we might have different vision of what’s the best way to get something done.”

Then Mr. Cuomo, who’d been sitting silently, cracking his knuckles, stepped in again. “Let me take it one step further,” he said. “I would argue that the test of the relationship–you know, you think about governors and mayors and modern political history, some relationships that were clearly not productive.” (Mr. de Blasio’s predecessor, Michael Bloomberg, had a famously strained relationship with Mr. Cuomo.)

“What are you saying? I never read about that!” interjected Mr. de Blasio with a knowing laugh. 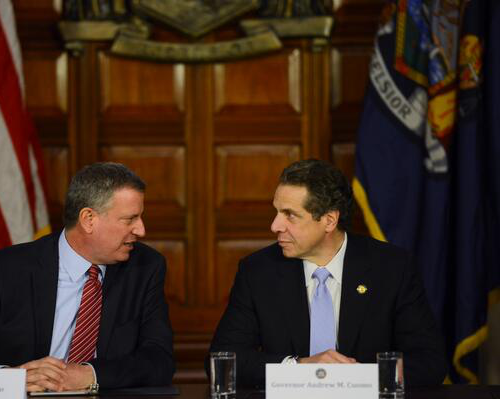