Mayor Bill de Blasio today made good on a campaign promise, laying out a deal to end the city’s appeal of a federal court ruling that deemed the NYPD’s implementation of stop-and-frisk unconstitutional.

Under the deal, the city will accept Judge Shira Scheindlin’s assessment that the the Bloomberg administration engaged in racial profiling and move to settle case.

Both the city’s law department and the case’s plaintiff have also agreed to recommend the court-appointed monitor be limited to a three-year term “on the condition that the NYPD is in substantial compliance with the decree,” the mayor’s office said.

“This is a defining moment in our history,” the mayor added in a statement. “It’s a defining moment for millions of our families, especially those with young men of color. And it will lay the foundation for not only keeping us the safest big city in America, but making us safer still. This will be one city, where everyone’s rights are respected, and where police and community stand together to confront violence.”

Read the full release below:

NEW YORK—Mayor Bill de Blasio today announced a historic agreement in the Floyd vs. City of New York case, taking steps to end the years-long legal battle that found the overuse of stop-and-frisk unconstitutional. Standing with plaintiffs, Police Commissioner Bill Bratton and incoming Corporation Counsel Zach Carter in Brownsville, Brooklyn, the mayor pledged to reunite police with communities across the city and to respect the constitutional rights of every New Yorker.

“This is a defining moment in our history. It’s a defining moment for millions of our families, especially those with young men of color. And it will lay the foundation for not only keeping us the safest big city in America, but making us safer still. This will be one city, where everyone’s rights are respected, and where police and community stand together to confront violence,” said Mayor Bill de Blasio.

“We will not break the law to enforce the law. That’s my solemn promise to every New Yorker, regardless of where they were born, where they live, or what they look like. Those values aren’t at odds with keeping New Yorkers safe—they are essential to long-term public safety. We are committed to fulfilling our obligations under this agreement as we protect and serve this great city,” said Police Commissioner Bill Bratton.

Under the agreement with plaintiffs announced today, a court-appointed monitor will serve for three years, overseeing the NYPD’s reform of its stop-and-frisk policy. The monitor is empowered to report to federal court on the city’s progress meeting its obligation to abide by the United States Constitution. The city will also take part in a joint process with community stakeholders to ensure people affected by stop-and-frisk play an active role in shaping reform.

“This administration will be a dogged defender of our peoples’ rights. That’s not an imperative at odds with keeping our people safe. And this agreement is a powerful first step toward achieving both of those goals. This will be real reform that focuses police attention on those individuals actually engaged in criminal activity and limits the intrusion of police activity on the lives of millions of  law abiding New Yorkers,” said incoming Corporation Counsel Zach Carter.

The city has already taken the first step in the process by asking the Court of Appeals to remand the case to the District Court. Both the city’s law department and the plaintiffs have agreed to recommend to the District Court that the monitor supervision will have oversight for three years, on the condition that the NYPD is in substantial compliance with the decree. Once that resolution has been confirmed by the District Court, the city will immediately move to withdraw its appeal.

“This is a breakthrough moment, because it underscores the City of New York’s commitment to stop a pattern of racial profiling that has been clothed in stop-and-frisk policing. We must all move forward with finding a way to secure citizens without profiling them,” said Reverend Al Sharpton, Founder and President of the National Action Network.

“Today marks the culmination of tireless and courageous work organizing, educating and empowering our communities and creating the change it took to finally reform unjust practices that target minority communities. I am honored to stand with Mayor de Blasio as we work together to end the stop-and-frisk era and safeguard the civil liberties of all New Yorkers,” said Public Advocate Letitia James.

“I applaud Mayor de Blasio and the law department for coming to this historic agreement with the plaintiffs in the Floyd case. The city has been fighting reform for far too long, and the legacy of Floyd should be that our city never again experiences the type of widespread constitutional violations outlined in Judge Scheindlin’s opinion,” said Comptroller Scott Stringer.

“I applaud this settlement, because reforming stop-and-frisk and mending the relationship between communities of color and the NYPD is long overdue. I am glad the mayor has committed himself to righting these wrongs, and the Council is looking forward to shaping, participating and providing oversight as the reforms are implemented,” said City Council Speaker Melissa Mark-Viverito.

“The NYPD’s stop-and-frisk policy has driven a wedge between the police and our communities, and today’s decision is a major step toward rebuilding that trust. I am proud today to stand with Mayor de Blasio, elected officials, advocates and others as this important decision is made. Together, we can move forward and ensure that our streets remain safe and the people of this great city are treated with respect,” said Bronx Borough President Ruben Diaz Jr.

“As leaders and advocates, our top priority is keeping New Yorkers safe; that has been my mission as an elected official and as a 22-year veteran of the New York City Police Department. Alienating our communities—especially our young black and Latino men—is counterproductive to this fundamental goal. We must mend the bond between law enforcement and the communities they serve. We must restore faith in our police department. We must make our brave officers and our men of color partners again. I have been proud to be part of this movement toward meaningful reform, including my participation in this litigation, and I am proud right now that we are seeing true progress,” said Brooklyn Borough President Eric Adams.

“Mayor de Blasio’s decision to drop the Floyd appeal is good news for all New Yorkers who care about both justice and crime prevention. Our policing can be effective while protecting and respecting all New Yorkers. Stop-and-frisk didn’t work. It violated the civil rights of those who were stopped. And it alienated entire neighborhoods in our city. I’m glad that the mayor has decided to drop this misbegotten case,” said Manhattan Borough President Gale A. Brewer.

“I am proud to stand with the mayor today for this announcement,” said Queens Borough President Melinda Katz. “I believe it’s the right path for the city to take at this time. It is critical that we restore trust and faith in every community in this city and begin to repair relationships. With effective community policing, New York can remain the safest big city in this country, while serving all of its residents with respect.” 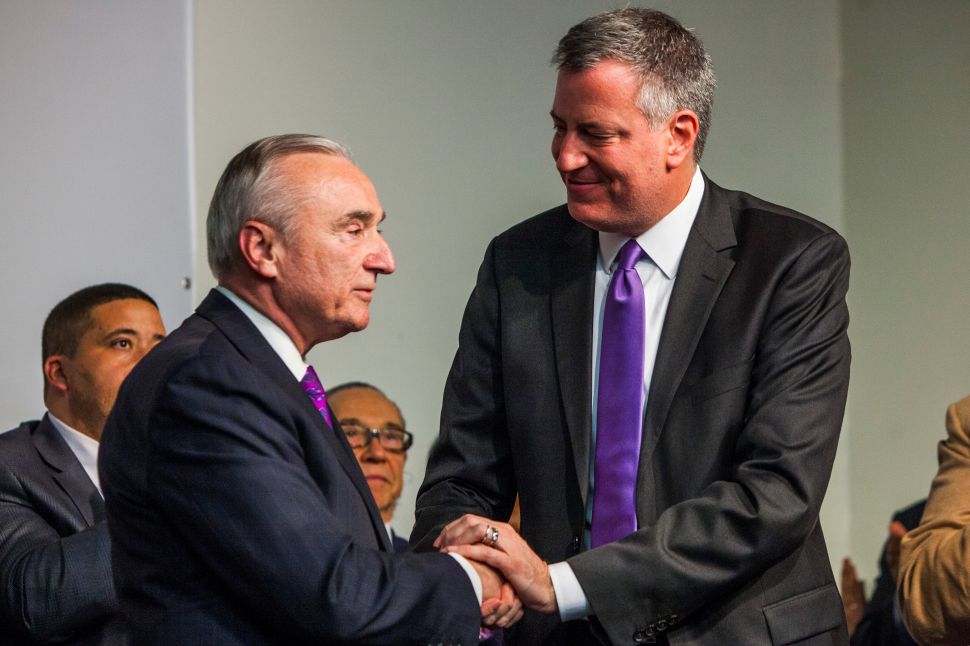