Mayor Bill de Blasio today predicted a movement led by the nation’s mayors to force Congress’ hand on a slew of progressive issues, including new infrastructure investments in cities across the country.

In a speech in front of the U.S. Conference of Mayors this morning, Mr. de Blasio called on his fellow mayors to forge a “new national urban consensus together—not just around priorities like pre-K and paid sick leave, but around strategic investments in affordable housing and 21st-century transportation,” as well as new funding for roads and mass transit.

Speaking to reporters after the meeting, Mr. de Blasio doubled down on remarks he had made during his first visit to D.C. as mayor, when he had described an emboldened “progressive movement” sweeping the nation. Today, he said a consensus had been reached to bring change to Washington.

“What I heard in a lot of the individual conversations with the mayors is that this question of inequality and the lack of opportunity—people are feeling this all over the country,” said Mr. de Blasio, according to a transcript provided by the mayor’s office.

He went on to describe “a wave of cities and state” taking on progressive issues like universal prekindergarten and mandatory paid sick leave.

“My colleagues share my frustration that we’re not getting the support we should from Washington to try and address fundamental issues. Again, I think that’s why you’re going to see more and more over the country—you’ve already seen a wave of cities and states taking on the paid sick leave issue. You’ve seen more and more cities and states addressing the pre-K issue. I think this will be the paradigm going forward,” Mr. de Blasio said. “I think there is a real groundswell among mayors all over the country—again, across party lines, across geographical boundaries, that we’re going to demand more of the Congress, because if urban America isn’t thriving, the nation can’t thrive.”

Mr. de Blasio, who also held a private meeting with Chicago Mayor Rahm Emanuel while he was in town for the visit, which was not disclosed to reporters until late yesterday, went on to tout the power of grassroots organizing to change federal lawmakers’ minds.

“If you talk to everyday people in cities all over this country, they know the federal government is not providing the support they need for their cities to thrive. We’ve got to get their voices to be heard more deeply in Washington,” he said. “My argument is that the voices of the people and the needs of the people are not breaking through the debate in Washington. It’s our job at the grassroots to bring those voices forward.” 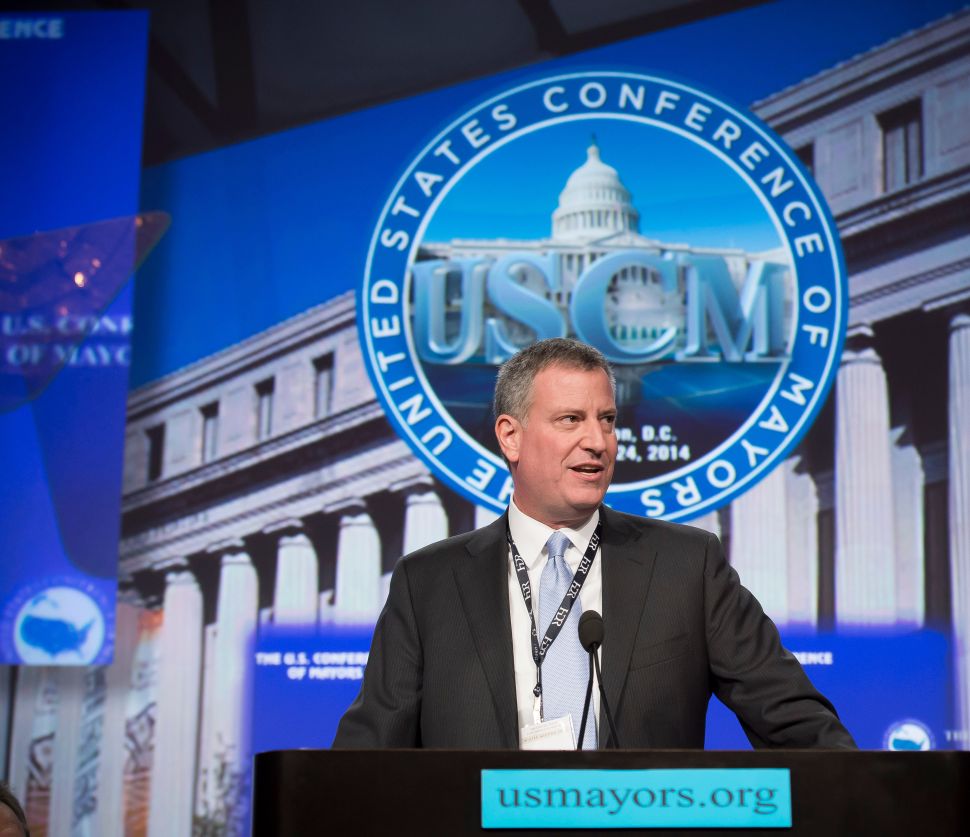