Mayor Bill de Blasio today defended the controversial comments made by many of his inauguration speakers, including one cleric who described New York City as a “plantation.”

“I am very comfortable with everyone’s remarks yesterday and I think the ceremony represented the positive aspiration of New Yorkers for a more just city,” he told reporters today after swearing in his new Police Commissioner, Bill Bratton, at a ceremony at 1 Police Plaza.

Many of the speakers at Mr. de Blasio’s event yesterday, including civil rights activist Harry Belafonte, Rev. Fred Lucas Jr. and Public Advocate Tish James, raised eyebrows for portraying the city in what many observers described as divisive terms. “Let the plantation called New York City be the city of God,” Mr. Lucas invoked, for example.

The remarks also included numerous shots at former Mayor Michael Bloomberg, who sat through the ceremony stone-faced in the front row. But Mr. de Blasio said today that he didn’t view the event as anti-Bloomberg.

“I don’t accept the question as stated, respectfully,” he said, when asked about the negative tone. “I made clear my real respect for Mayor Bloomberg. It’s not a secret that I’ve had some disagreements with him on policy, but I honored, with a whole heart, what he did for this city. And there’s also some areas where I very much agree with him and look forward to continuing his policies. I delineated that a bit yesterday and I’ve done so more before-hand. I appreciated President Clinton’s warm comments about Mayor Bloomberg as well.”

“But I think everyone who spoke at the inauguration spoke from the heart, talked about their own understanding of our city and what we need to do to move our city forward. I’m very comfortable with all that was done,” he continued.

Pressed again on the tone of the celebration and the plantation remark, Mr. de Blasio defended the speakers, and side-stepped questions about whether he’d vetted their remarks before-hand. 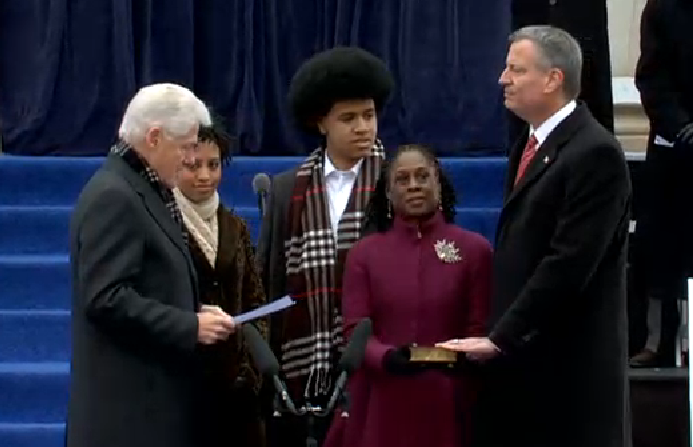