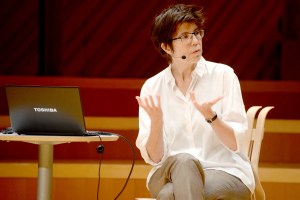 At the Los Angeles Times today architecture critic Christopher Hawthorne has an interview with Elizabeth Diller of Diller Scofidio + Renfro, the firm behind the Museum of Modern Art’s controversial expansion plan.

In it, Ms. Diller defends the main source of controversy: her firm’s plan to demolish the 13-year-old American Folk Art Museum, which MoMA purchased in 2011 after the Folk Art museum moved to Lincoln Square due to financial issues. Ms. Diller said her firm had no conflict of interest in both evaluating whether the museum could be saved and designing a replacement for it. In fact, she seems to reason, those two factors are the reason why there was no bias.

We weren’t hired just to do one discrete thing, to make a judgment about what to do with the Folk Art building. We were hired to help MoMA with an expansion. And when we opened it up to a bigger scope, looking at how to make the museum work better, the project became much more complex, quite frankly. So I don’t know how to answer that question.

Mr. Hawthorne asks if she’d be comfortable with one of her own firm’s buildings being demolished in similar circumstances. Ms. Diller says she would be but also doesn’t seem to think that such a thing would ever happen to one of her buildings, because:

We try to make buildings last long and be resilient, but also be not so idiosyncratic that they can’t change. I think the reason this [Folk Art] building was very difficult to transform into something else was its degree of idiosyncrasy. If we were to eliminate a lot of those idiosyncrasies, we could use it. But at a certain point it takes on another identity. The very people who are so emotional about the loss would be seeing a very, very compromised building, just to make it work.