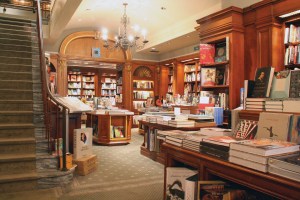 News leaked out earlier this week that the building that houses the Rizzoli Bookstore on 57th Street, part of a dying breed of old school booksellers in the city,  was facing demolition in favor of luxury condominiums. A spokesperson for Rizzoli issued a statement this afternoon saying, “The Rizzoli Bookstore is, and will remain, open for business at its current location for the time being, though the company is actively seeking new space.” The full statement can be read below.

(January 16, 2014) Following news stories about the pending demolition of the building housing its New York flagship store, Rizzoli would like to clarify the situation.

The Rizzoli Bookstore is, and will remain, open for business at its current location for the time being, though the company is actively seeking new space.

For almost fifty years—twenty-nine in its current 57th Street location—Rizzoli Bookstore has been widely considered one of the foremost independent booksellers in America specializing in illustrated books on architecture, interior design, fashion, photography, cookery, and the fine and applied arts, as well as literature, and foreign language books. Rizzoli Bookstore has been, and will continue to be a literarylandmark in New York City, and a celebrated destination for important authors and booklovers from all over the world.

Rizzoli has been touched by the outpouring of public appreciation for the 57th Street bookstore as an important part of New York City’s cultural life, and looks forward to remaining a vital part of the city’s fabric for many decades to come.