1. Adam’s sister Caroline is introduced in this episode as a sort of emotional vampire, who takes advantage of the compassion of others (specifically in this case, Hannah) to get what she wants. And when she encounters real pain, like Ray’s at the party, she feeds on it as well, literally biting him. (Also, possibly not coincidentally, this is the bloodiest episode of GIRLS yet.) And yet it is Adam who gives Hannah a tooth as a gift. Assuming we can see a family resemblance here, what sort of vampire is Adam? What feeds him? Or is he the polar opposite of his sister?

As someone who has seen Now & Then approximately a billion times (including this weekend), I’m more likely to conclude that Gaby Hoffmann is less a vampire than she is a ghost: She’s the specter at the feast, who haunts the household with her real crazy. (As bad as Hannah’s OCD is, her self-harm only went as far as her bangs and an errant Q-Tip.)

Adam’s also not an emotional vampire; he’s more of a Frankenstein. If anyone would be the succubus of the girls in this episode, it’d have to be Marnie: Draining the life expertly out of a party with a well-placed “Take Me or Leave Me.”

2. Adam describes his sister as someone who doesn’t have the decency to implode alone, but has to drag everyone down with her. But that’s also a pretty apt description of Ray in this episode, acting out his discomfort by ruining the party. And it is definitely applicable to Marnie, who takes her shame over the embarassing video and just plops it right down on Hannah for a painful performance of her own. Is this kind of displacement simply the way the characters on this show operate? How is Caroline’s version worse than theirs? And what does that tell us about how the writers of GIRLS sees emotional relationships between young people today?

First of all, who has the decency to implode alone? Those that do might be a self-selecting group of successful suicides. Perhaps this is the point of friends, to which Hannah refers to obliquely in the first episode, that they are there for you to bring down during your time of need? That they won’t hold it against you when you manage to humiliate them during their own birthday party, because wow, you still did a really good job putting that party together? (Seriously, when was the last time Marnie put that much effort into anything, except crying?) Or that strangers like Hannah’s editors will be far less forgiving when you decide to go on a rant about the music, leading to the first (but not last) bloodied body of the evening?

At least when Caroline implodes, she just makes you a witness, not a victim.

3. Poor Laird. Yet again he is shunted aside and ignored—this time, just as he was about to give Hannah her birthday present, with some fanfare. Like Adam’s gift, Laird’s was pretty clearly homemade, suggesting some kind of link; they are after all the only two gifts we see Hannah receiving on her birthday. Imagine what Laird’s gift might have been. Was it creepier or less creepy than a tooth necklace? And how might Laird have been preparing to introduce it?

4. Marnie flat-out admits that part of her motivation for throwing the party is so that she’ll have a lot of party photos to post to Instagram, so Charlie will see that she is out and having fun. The absent Charlie still seems to loom large over every scene of GIRLS featuring Marnie. But this image of her ex is clearly a projection of her own obsession and insecurity filtered through social media. She refuses to call him to ask him to take down the embarassing video, but still manages to float the suggestion that even knowing his password would upset her or gross her out. (What does she think it possibly could be? “Marnieislame”?) Is Marnie’s ongoing projection of Charlie anything like Charlie? Are we meant to think of this as normal, if extreme, post-breakup anxiety, or is there something pathological in Marnie’s behavior? And is Ray’s overall approach to Shoshannah, on whom he has projected a depth and personality that simply doesn’t seem to exist, the same thing or something different?

Ray, disturbingly, seems to have the healthiest attitude towards his ex that we’ve seen in the show. He hasn’t mentioned her name since the break-up (that we can see), and his first interaction with her, he makes an effort towards conversation before realizing that he, in fact, doesn’t want to be her friend. (Why should he?) Then he gets drunk, belligerent, and punched in the face…like an adult. Sure, the lengths to which he goes to put up an emotional wall against his ex may seem extreme, but they are doubtlessly more healthy than the tactics Marnie employs.

Marnie’s constant back-sliding into stalking Charlie on social media (see the last season two seasons,) does kind of make sense, considering Charlie’s passive-aggressive tendencies towards app-making w/r/t his ex. But it’s also indicative of our culture’s unhealthy attitudes regarding Internet tabs-keeping on people for whom Ray’s scorched earth policy would undoubtably be a more appropriate response.

5. For a show ostensibly about young women, this is yet another episode that focuses on and is mostly told from the perspective of a male character, Ray. Jessa and Shosh, meanwhile, hardly get any lines at all. How would this episode have looked from one of their perspectives? Would Jessa think of Caroline as a sister, or a rival? Does Shoshannah even care that Ray doesn’t want to be her friend?

Wait, this episode was told from the perspective of Ray? How so? A couple of scenes focused on him, but this was way more about the Hannah-bonding-with-a-crazy-person scenes than anything else. (“Do you want to come to my birthday?” is generally not a sane response to someone unloading all their unpleasantness onto you, but goes a long way towards explaining how Hannah became friends with Marnie and Jessa in the first place.)

So yes, Jessa might see in Caroline something of a kindred spirit–they’re both cut from the same ‘toxic hippie’ cloth–but that would probably repel them off of each other more than bond them. (There is nothing drama queens hate more than a reflection of themselves.) Seen from Jessa’s perspective, this episode would have looked like Hannah’s failure to live up to her promise from rehab to care about Jessa forevs: She’s already moved on to a new “project” friend, while Jessa’s addictions and issues are being treated like they’re so last week. Which is exactly what they are. 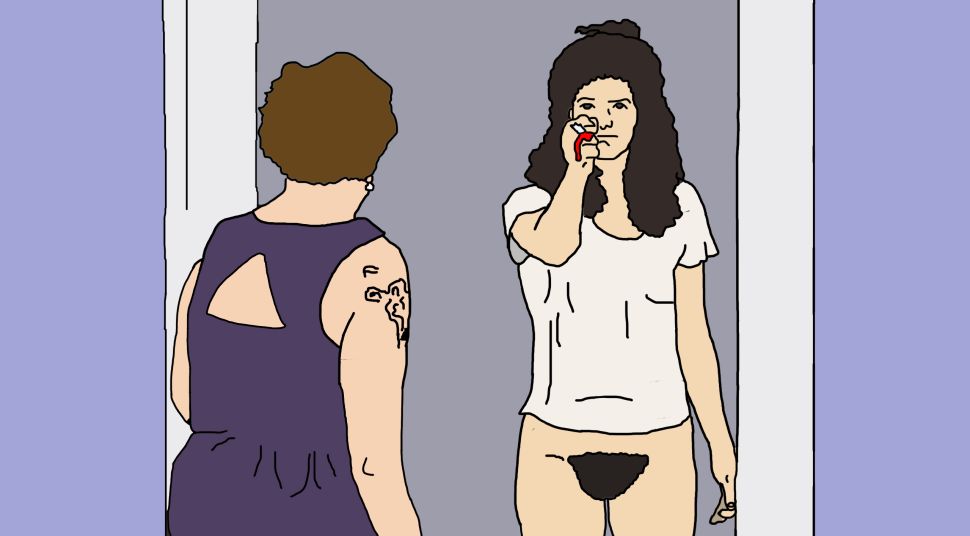