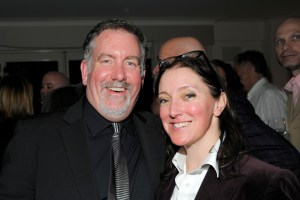 What attracted him to the job? “The fact that it’s a platform not only for art, ideas, and photography, and its legacy and commitment to social change and social progress, as well as bringing under-known work to light was incredibly attractive,” he said.

Mr. Evans said that he had been in talks with FotoFest founders Wendy Watriss and Frederick Baldwin for about a year. Ms. Watriss and Mr. Baldwin will be organizing the 2014 biennial, which runs March 15 through April 27, with Mr. Evans joining them to collaborate on the 2016 edition.

Asked about his immediate plans for the organization, Mr. Evans said, “I want to expand on the partnerships that FotoFest has, and I also want to make sure that we move forward with interdisciplinary looking at photography and related media, as well as taking advantage of new technology.”

Before all that, though, he has other plans. “I’m going to start on a listening tour,” he said. “I think that’s the best way to begin.”

Update, 10:55 a.m.: An earlier version of this post misstated the dates of Mr. Evans’s employment at Dia and the Linda Pace Foundation.