Two weeks after taking office, Mayor Bill de Blasio has yet to fill a long list of top administration positions, leading to frustrations and confusion in some corners about how long holdover staffers are supposed to stay on.

Despite a flurry of hires in the days before he took office, which seemed to quell public criticism, Mr. de Blasio hasn’t named a single new appointment since last Tuesday, when he rolled out his press team, leaving a long list of agencies without permanent leaders, including the New York City Housing Authority, responsible for housing more than 400,000 residents, the Department of Buildings, which oversees building inspections at nearly 1 million properties, and the Department of Correction, which oversees the city’s jails, marking the slowest rollout in modern mayoral history.

But at least two agencies, the Department of Cultural Affairs and the Mayor’s Office of Media and Entertainment, remain leaderless.

“We don’t have an acting commissioner at the moment,” said a Cultural Affairs spokesman when asked who was leading the agency. He later added, “The agency continues to carry out its regular functions, including its grant programs for the city’s nonprofit cultural community,” nonetheless.

“There’s currently no acting commissioner,” said a spokeswoman for the media office, who said that day-to-day operations, such as issuing permits for TV and movie shoots, hadn’t been affected by the gaps.

And while the vast majority of current and recently departed staffers interviewed by Politicker in the past week said operations are still running smoothly, with no perceptible impacts on day-to-day services, many acknowledged that staffers had been given scant information about when replacements would be appointed, leaving deputy commissioners and other holdovers in a holding pattern that has angered some. One deputy commissioner said many commissioners have been told they won’t be asked to stay on but have been given little to no direction about how long they’ll be needed.

“I cannot tell you how scary it is now. Senior staff at a variety of agencies have no clue what is going on,” said the deputy commissioner said.

The deputy also complained about a larger lack of communication between agencies and the new administration. “Emails are not being returned, and there is already a strong sense of being rudderless,” they said.

Though most visible slots in most agencies are now occupied by interim staffers, some offices have begun to grow roomy as lower-ranking staffers, including various deputies, head for the door.

At the Department of Finance, which collects city taxes, administers parking tickets and oversees the city’s pension payments, three of five deputy commissioners are gone, including the agency’s deputy commissioner for operations, who oversaw everything from tax and parking collections to payment operations, the deputy commissioner for administration and planning, who oversaw the office’s press office, budget and external affairs, and the general counsel, another deputy-level post, according to an agency organizational chart. The agency’s chief of staff is also leaving at the end of the end of week, while the city’s sheriff is set to depart at the end of the month.

Still, Owen Stone, a spokesman for the department, said things were humming on as usual with assistant commissioners taking on bigger roles. “It’s not affecting our ability to do the work we do. And in many ways, we’re doing it as efficiently as ever,” said Mr. Stone, echoing agency spokespeople across the city.

A spokesman for the mayor, Phil Walzak, also insisted lines of communication were clear, with the city’s new deputy mayors stepping into their leadership roles.

“Mayor de Blasio and senior staff have met with agency heads to establish lines of communication and to ensure strong continuation of government functions and coordination,” he said in a statement. “First Deputy Mayor Shorris and Deputy Mayor Barrios-Paoli meet regularly with the leadership at agencies under their purview. Deputy Mayor Glen will do the same with her agencies after she officially begins on Jan. 21, and she continues to review weekly reports from her agencies.”

Still, there are other signs that the transition has been rocky. At the Department of Buildings, according to a source familiar with the matter, Mr. de Blasio’s team failed to reach out to then-former Commissioner Robert LiMandri to inquire about whether he’d be willing to stay on until a week before his scheduled departure. The source said Mr. LiMandri declined and former First Deputy Commissioner Thomas Fariello was forced to quickly step in as acting commissioner. Mr. LiMandri did not return multiple requests for comment; a department spokeswoman declined to comment.

Other holdovers, including Sanitation Commissioner John Doherty, also weren’t asked to stay on until right before Christmas, even though Mr. de Blasio was elected the Democratic mayoral nominee in early September and knew he was a shoo-in for months.

One now-departed Bloomberg-appointed commissioner also said he’d been surprised the incoming de Blasio administration hadn’t taken him and other agency staffers up on their offers of assistance during the transition before they left.

“It’s pretty surprising,” said the ex-commissioner, disappointed that Mr. de Blasio’s team had not sought his input. “I said, ‘I’ll do whatever I need to be helpful.’ I have all our divisions laid out, a big binder with everything. … It’s really good. It’s colorful.”

“There’s a lot of anxiety in a lot of different places,” he said. “People sort of looking at each other.”

Updated at 6:46 p.m. with additional comment from the spokesman for the Department of Cultural Affairs. 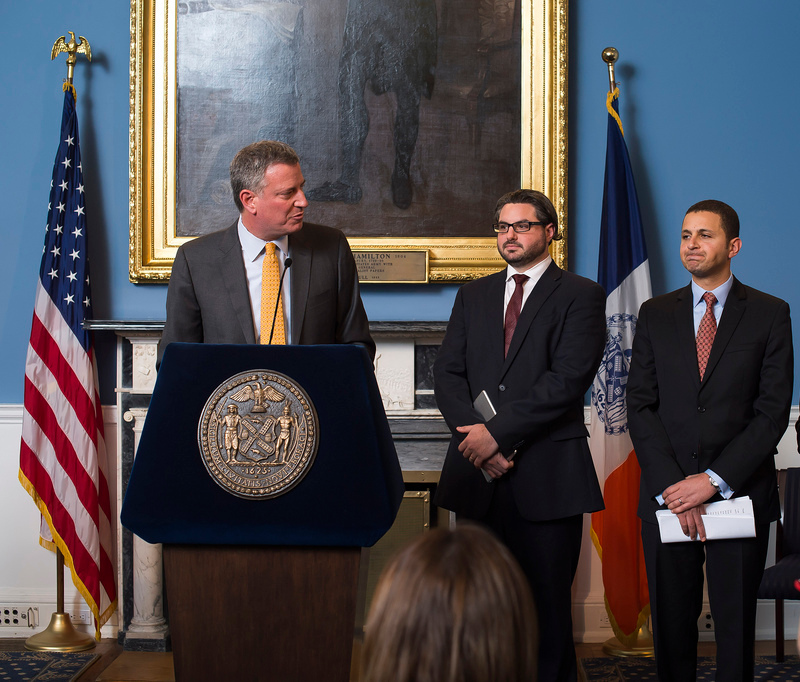