In an interview, Mr. Scotto told Politicker that Mr. Grimm called him around 10:45 a.m. to make amends for last night’s headline-grabbing eruption.

Mr. Scotto was interviewing Mr. Grimm after the speech when he tried to ask the congressman about reports that he is under federal investigation in connection with illegal campaign fund-raising. According to an NY1 transcript, Mr. Grimm grew enraged and threatened to throw Mr. Scotto “off this f—–g balcony” and “break [him] in half. Like a boy.”

Mr. Grimm released a statement last night defending his bizarre behavior–but Mr. Scotto said the congressman “backtracked entirely from what he had said in that statement” in their conversation and suggested the two get drinks at some point to “bury the hatchet.”

For Mr. Scotto, that was enough.

“I accepted his apology. It was a short conversation, a couple of minutes long,” he reflected. “He did seem sincere, but at the same time, he’s aware that the coverage over the last 12 or so hours has been pretty terrible for him. Whether that contributed, I can’t speculate.”

Mr. Sotto also said that, while he was caught off guard by Mr. Grimm’s reaction last night, he never felt like he was in danger.

“He was clearly very angry and I’ve never seen a politician that I’ve interviewed get that angry–especially with a camera right in front of him–but I never felt like I was going to get hurt,” he said.

Mr. Grimm released a statement, making his apology public after the call. “I was wrong. I shouldn’t have allowed my emotions to get the better of me and lose my cool,” he said. “I have apologized to Michael Scotto, which he graciously accepted, and will be scheduling a lunch soon. In the weeks and months ahead I’ll be working hard for my constituents on issues like flood insurance that is so desperately needed in my district post Sandy.” 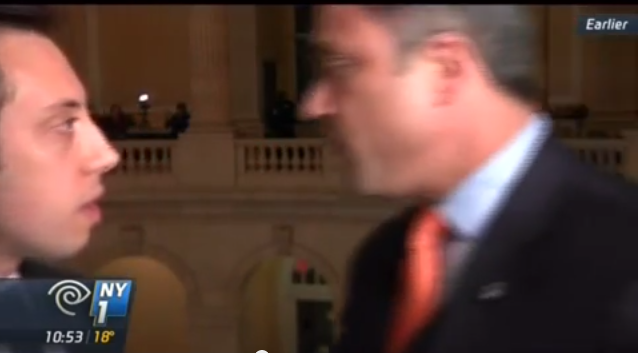