“‘Puberty.’ Not a word one often sees on the cover of a magazine. I wonder if there’s a reason for that,” the self-aware magazine wrote in a behind the scenes look at how the cover got made.

Leaving aside the fact that we thought that ten was a bit early to puberty (apparently, ten is the new twelve when it comes to human development) and the fact that “hitting puberty” is usually the just start of the awkward stage, we wondered what other headlines Businessweek could have used to convey the idea that the social media network is now a pubescent tween.

Here are some ideas:

Facebook Is Old Enough To Be Interviewed About Tween Culture 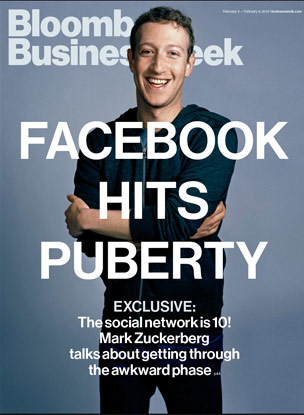