This is the most Brooklyn thing I’ve ever done.

I’m on my way to a yoga class and silent vegan dinner in Greenpoint, but I’m lost on the wrong Meserole.

“Silent dinner? Does that mean everything it’s made of was silent, or you don’t talk when you’re eating it?” a friend asked.

And tonight, they’re offering a yoga class beforehand — the most appropriate matchup since sorority girls discovered PINK sweatpants. Zen types will be paying $40 for the 70-minute class, followed by a three-course vegan spread.

Eat has received quite a bit of press in the past about its mum mealtimes, with the New York Post declaring, “Bland cuisine and atmosphere don’t boost Eat’s silent dinners.” I’m going to find out whether eating in silence is B.S. But first, I have to find the restaurant. I’m having an identity crisis to go with my Google Maps malfunction.

Is this the exact moment I’ve become a millennial Brooklyn cliché? I am, after all, wearing a scarf that I knit myself. This doesn’t help my case. But I swear I got into knitting before DIY bloggers started espousing it, before Zooey Deschanel, before ukeleles and tap dancing and Girls.

I realize saying that makes me sound even more Brooklyn.

I call one of the event organizers to find out where I went wrong. He whispers into the phone that he meant to put Meserole Avenue, not Street, on the invite. I hop back onto the G train, on which I already spend way too much time every day, and barrel toward the Nassau stop, wondering how any city planner could be so boneheaded as to put two such similarly named thoroughfares less than two miles apart with exactly the same cross streets and off the same subway line. Ugh, Brooklyn.

I arrive a half hour late, and the yogis are packed on top of each other, midway through a cycle of warrior poses. The crowd consists mainly of fit, black‐legginged girls and one or two male winners of the Adam Driver lookalike contest.

Not wanting to disrupt the class due to my tardiness, I stand in the corner, flush against a giant heating pipe, and listen to the instructor, Angelica Olstad of Pop Up Yoga NYC. It sounds like a pretty solid class. She’s talking about toe mound awareness. That’s how you know it’s legit.

Watching the yoga practitioners lift their butts skyward in a rousing round of downward dogs, I think more about cultural clichés and social archetypes. I’m only doing this because my phone just died and I can’t text anymore. That makes me feel even worse.

Now, tables emerge and we quietly take our seats. At one end of the long table, a server hands me a napkin. “Thanks,” I whisper. He looks at me, pointedly not responding. “Sorry,” I whisper again. This is harder than I thought.

The guy to my right is smiley and nice. At one point, he pours me some wine and we mime a joyous “cheers!” with the canoodling couple across from us while someone at the other end of the table shoots us a dirty look for clinking too loudly. I shoot her a look that I hope says, “Jealous?” like a telepathic Real Housewife.

Some bread comes out. I’m terrified to pick up my silverware, lest I make too much noise.

Next, soup. Normally, when I’m out to dinner with someone who orders soup, I’m able to talk loudly enough to cancel out impolite slurping noises. Tonight, I’ll have no such luck. My immediate neighbors aren’t slurping too loudly, but I can hear gross mouth noises from my fellow diners all the way at the other end of the long banquet table.

People start in on their soup as soon as it is placed in front of them, instead of waiting for the whole table to get theirs. Rude. And nobody has  napkins in their laps — my mom would have a conniption. What about this is relaxing, again?

Somebody’s cell phone rings. I feel smug because it’s not mine.

The photographer who’s here to shoot this writes a snarky note on her iPad and shows it to me. She is funny. I want to ask her questions. That camera seems cool, where’s it from? How long have you been with Getty? Where do you live? What’s your favorite color? Instead, I stare at a blank wall and wait for my entrée.

Here it is! A pile of lukewarm beans, as well as some potatoes and vegetables. It isn’t bad. I scarf most of it down — I have nothing better to do without use of my voice box — before looking up and realizing most of my companions are slowly savoring their meals, thoughtfully gazing into space and nodding, meditating over the flavor of these beans I can’t identify because it’s so damn dark in here. I feel like a ruffian.

I put my fork down and stare at it for a good 10 seconds, then give up and finish the plate.

Our dessert is a raw apple and pear tart, which tastes exactly how it sounds. I usually enjoy raw vegan food, I swear — probably because of the vegan phase I went through when I was 20 (+1,500 Brooklyn cliché points) — but this meal leaves me craving a rare cheeseburger.

At the end of the meal, we’re permitted to finally talk. Usually a chatterbox, especially with strangers, I find myself exhausted. I think I’ll go home and order that burger. Because after all, who needs a subway trip to a silent restaurant when your roommates are out and Seamless exists? 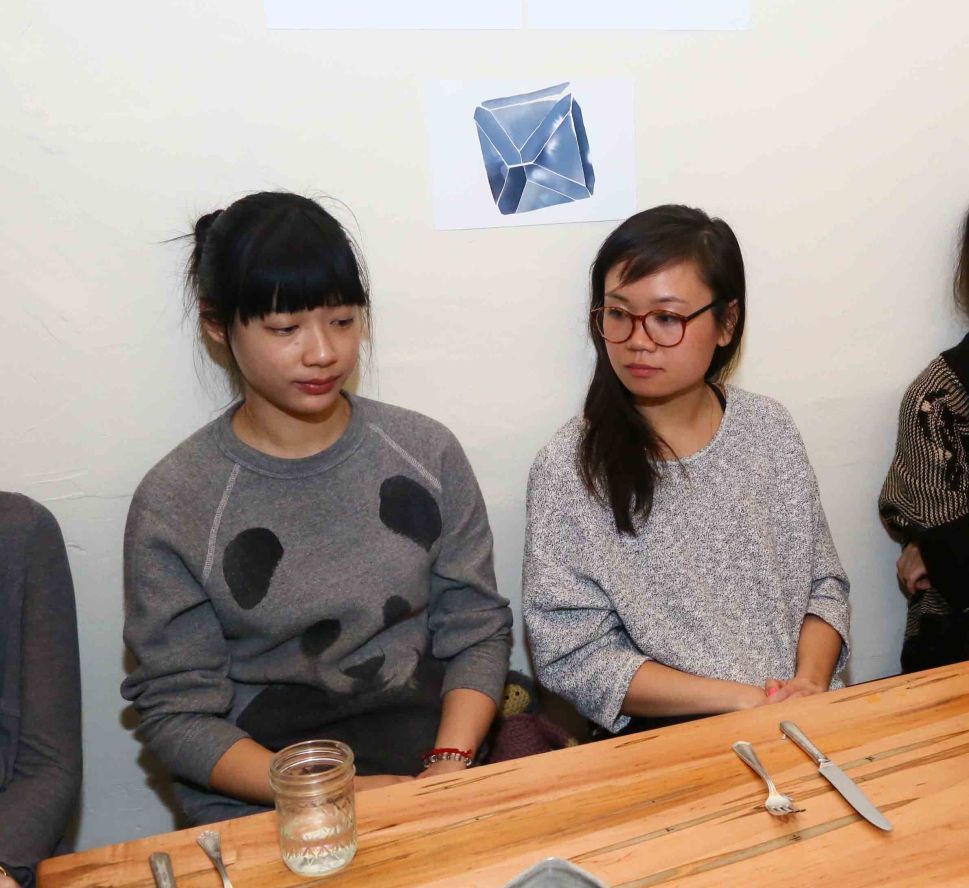