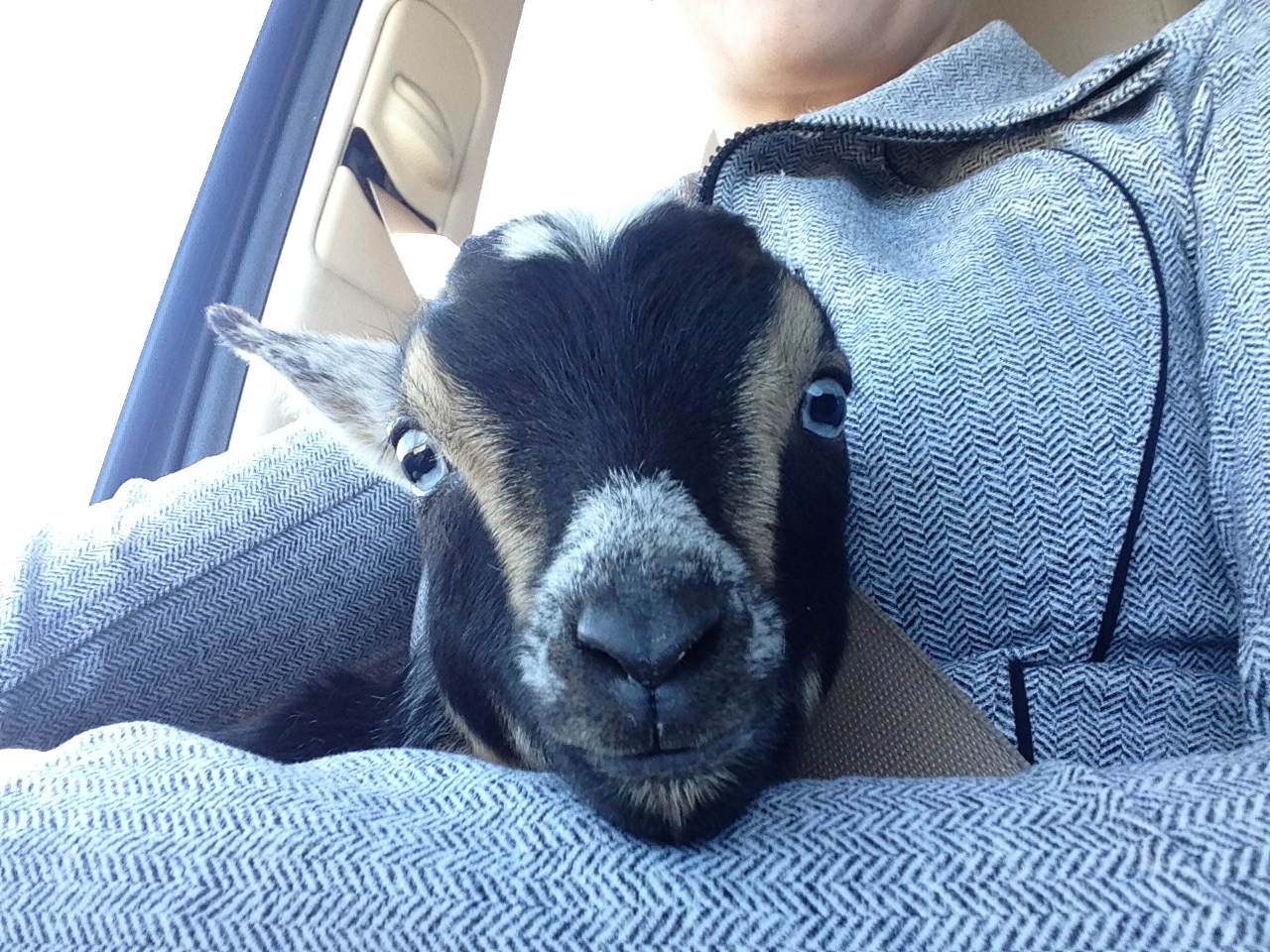 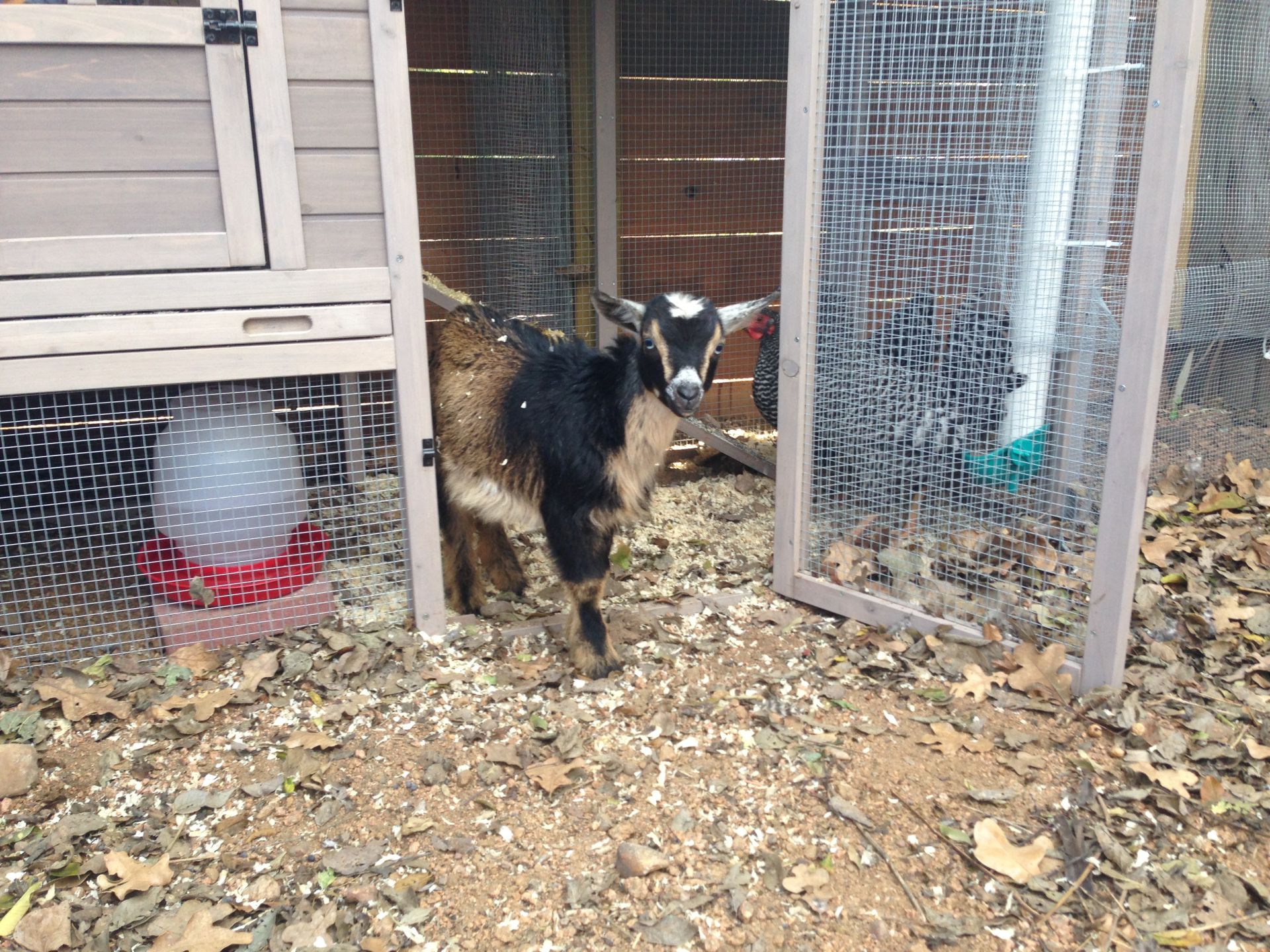 Bucket gives you a tour of her home. 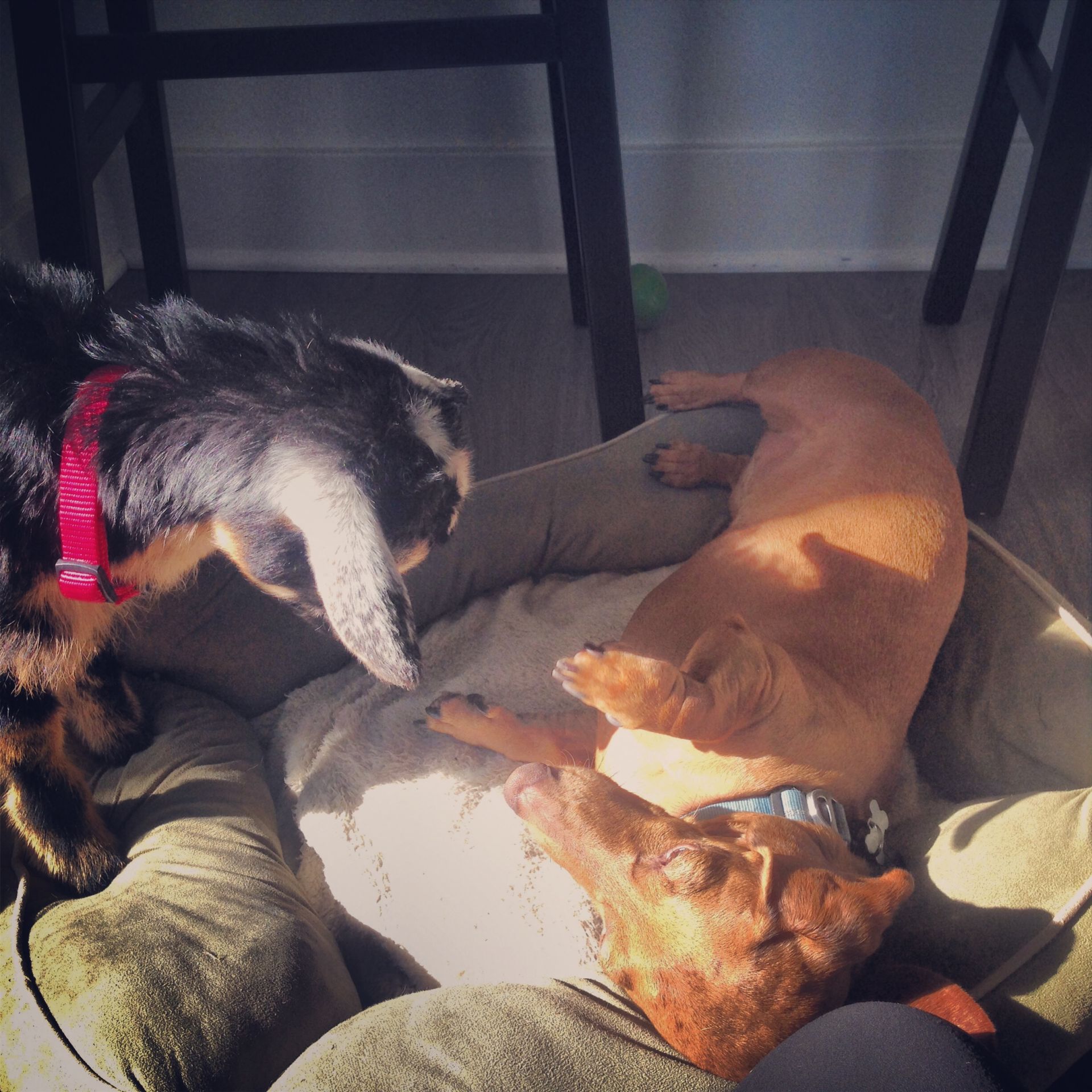 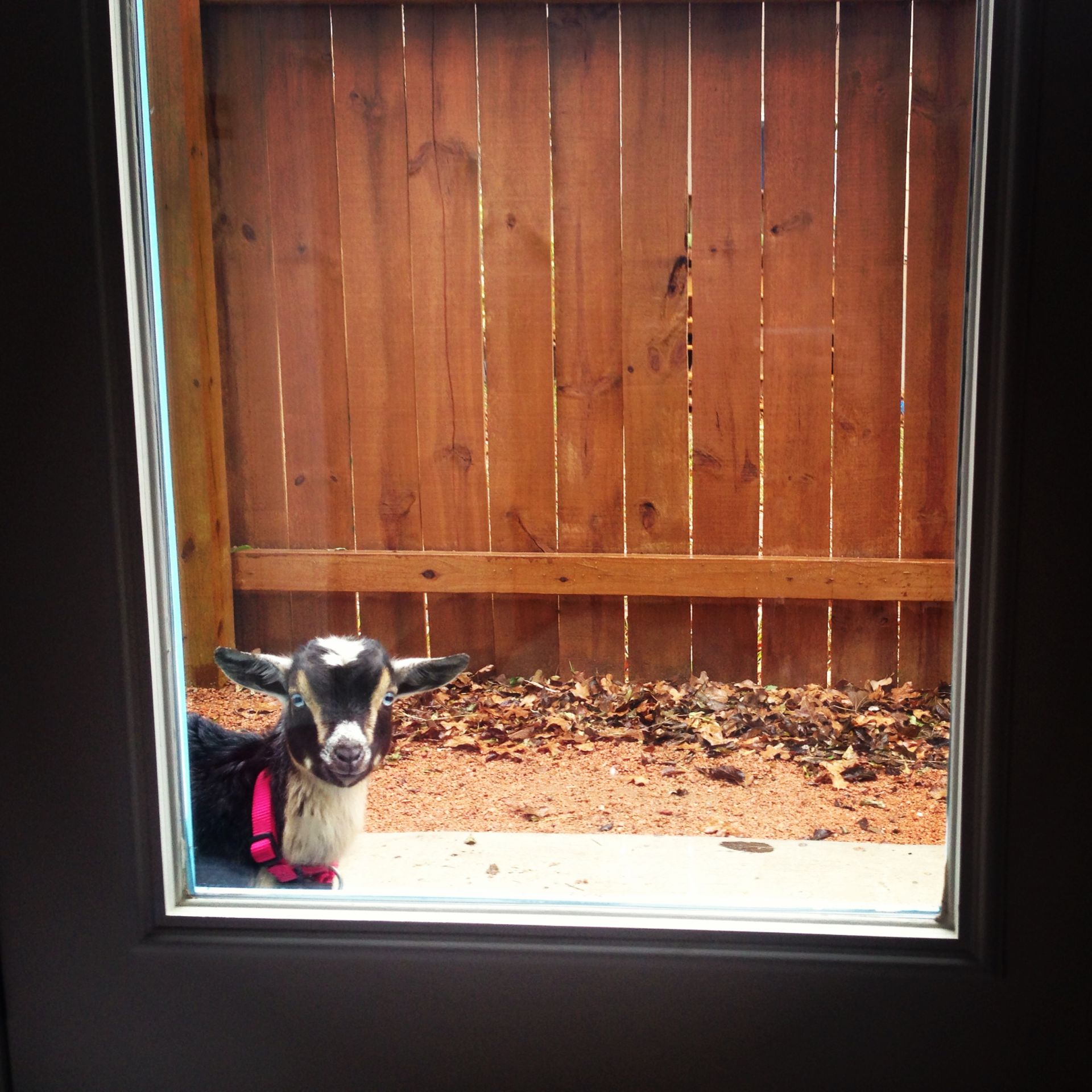 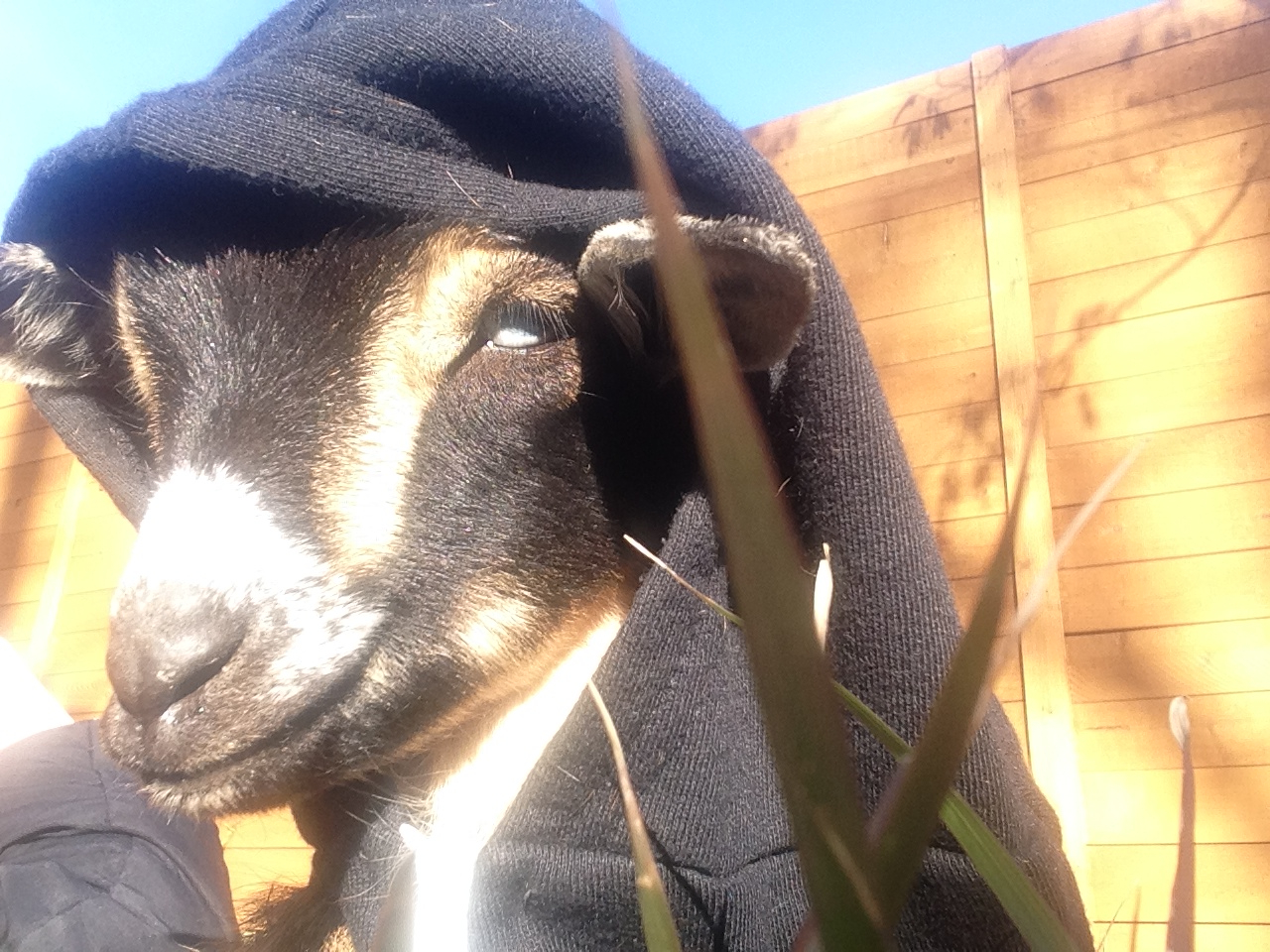 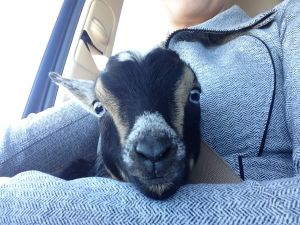 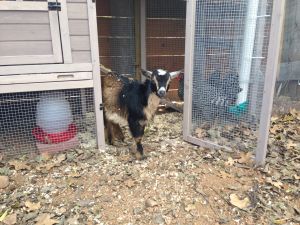 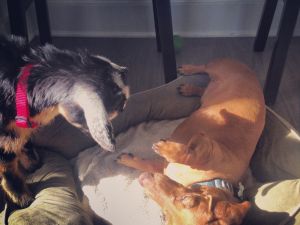 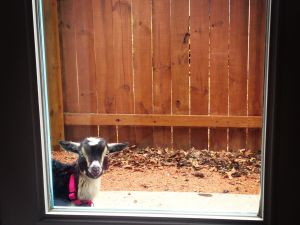 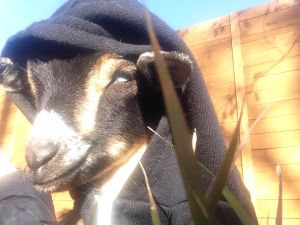 I own a goat. Her name is Bucket.

Less than a year ago, I had an apartment in Manhattan, convinced I was ready to live the dream. I was a published author. I had high profile PR and marketing clients. I wasn’t sure exactly which dream I was living but I was pretty sure New York City was the place you came to celebrate it.

Twice today–once while on a conference call and then again while writing this article–I heard scratching at the door. It’s usually the dog asking to go outside. But this was my goat, and she wanted to come inside.

She scampered off to eat some leaves.

But soon enough she’d be back, like a good-natured amnesiac, to make the same request.

This is life in Austin, Texas. I have a pet goat.

Bucket is a three month old Nigerian Dwarf goat from a small farm in Seguin, Texas. She has blue eyes, a pink collar, and comes when you call her. She also enjoys being picked up and giving kisses. Currently she weighs about 20 lbs. and won’t get much bigger than a medium-sized dog. The only major change we’re expecting are her horns, which already grow a little every day.

When we first started talking about buying a goat, the veneer of utility still existed. Goats are Mother Nature’s little lawnmowers, after all, and I hate cutting the grass. Then we learned that goats do not eat grass. This fact came as a relatively late surprise in the decision making process, and eliminated the half-hearted justification my girlfriend and I had for our $350 impulse buy. She does eat weeds, clover, leaves and other such undesirables, but that doesn’t really matter anymore.

And that is because I find great peace and pleasure in sitting in my office/library and watching her out the window. She doesn’t know I can see her, but I can. I watch her bother the chickens (which have slightly more practical benefits for our fridge). On occasion I will catch her laying down in their coop for some reason. I watch her prance, and every so often, stop and make goat noises to no one in particular.

When I am on the phone, I will walk around the ground floor of the house and track her as she makes her migration around the yard. It’s a game that makes boring calls bearable, though it has required me to stifle a laugh a few times.

Only recently did my girlfriend–who I’ve been with for several years–finally come forward with her dream of living on a farm. Of course, she did this after I bought a house that is not anything like a farm, so we’re doing the best we can.

Is this my first step on the path carved by Susan Orlean? I hope not–though secretly I also hope so. The landscape she painted in her short book, Animalish, of a menagerie of unusual-but-not-exotic animals seems like a writer’s haven and just generally an interesting place to live.

Having animals is soothing (especially if your pretty farm girlfriend takes care of the details). I just get to look at them and pretend they are my friends. I get to project personalities onto them and have ridiculous conversations purely for my amusement.

My favorite is to pretend that my miniature dachshund is horribly betrayed by these new additions to the households and is constantly trying to inform on their behavior to get them in trouble. Or after hearing her dart up the stairs, that she’s breathlessly alerting me to the news that someone has let a goat into the yard.

In reality, she just wants to play. Unfortunately, Bucket does not understand fetch and feigns a headbutt if the dog gets too excited. Dachshunds are great at flushing out badgers; they are not great at taking a horned skull to the face.

When I am out of town my girlfriend sends me photos of their antics–including one recently that had both the goat and the dog wrapped up inside the coat she was wearing. There was also the infamous shot of the goat wearing an American Apparel dog hoodie.

But I also found out somewhat accidentally that my girlfriend and I have slightly different relationships and boundaries with the animal. Back in New York for meetings this week, I got a motion alert from my Dropcam, which monitors my living room and inside doorway. Usually the update is wind related, so I certainly wasn’t expecting to see the goat, the dog and Samantha all playing on the floor together. I guess that explains why Bucket always seems to expect me to open the door and let her in.

Sitting between meetings, watching this interspecies cuddlefest 1500 miles away, I realized the life I had envisioned for myself here in New York allowed for none of this. It was expensive, and it was restrictive. No question it afforded certain business opportunities, but they are purchased at a high cost. Not just in rent and cost of living, but in options–especially ridiculous options.

I’m not saying to run away and live small town life. That sounds equally nightmarish to me–that wasn’t my intention with Austin anyway. Work hard, take it seriously, embrace your ambition. And when you’re not doing that, do something–whatever it happens to be–that taps into the part of you that makes you forget about all the rest of it.

Ryan Holiday is a best-selling author and adviser to many brands and writers. His newest book, Growth Hacker Marketing: A Primer on the Future of PR, Marketing and Advertising, focuses on the untraditional tactics behind a new class of thinkers who disrupted the marketing industry.