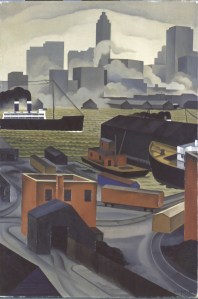 When you head up to Yonkers for this exhibition, take the train. Chugging along on Metro-North, you’ll have views of the East, Harlem and Hudson Rivers and catch glimpses of the Queensboro, Triborough and Henry Hudson Bridges, and the Chrysler and Empire State Buildings. This landscape, which was built up and transformed in the first four decades of the 20th century, enchanted the exhibition’s 51 artists. Industry was remaking the city, rendering it spectacular and shocking and strange. In their attempts to capture and make sense of this overwhelming, sublime new world, they forged a new, distinctly American art.

The Ashcan painters were at the forefront of that project and are among the biggest names in the show. Robert Henri painted moody dock scenes on the East River, William Glackens boats at rest in a soft, somber New York Harbor, John Marin a rich, explosive watercolor view of lower Manhattan’s fast-rising skyline through a ship portal and Everett Shinn hard-laboring barges on the East River against a backdrop that is all grime, soot and oily bronze. 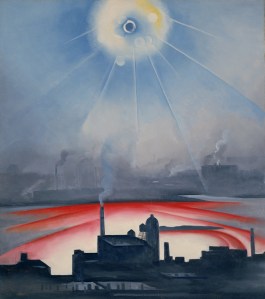 ‘East River From the Shelton (East River No.1)’ (ca. 1927–28) by O’Keeffe. (Courtesy the New Jersey State Museum and the Hudson River Museum)

There are household names in the show, but, refreshingly, they tend to be represented by uncharacteristic work. From Georgia O’Keeffe, who is best known for her Western landscapes, there’s a shimmering view of the East River from the studio she shared with Alfred Stieglitz on the 30th floor of Midtown’s Shelton Hotel. From the illustrator Reginald Marsh, largely identified with bustling street and dancehall scenes, there are smoky waterfronts in meticulous watercolor. From Leon Kroll, a painter of spooky portraits of young women, comes a crowded, snow-covered train depot on a frigid day. There are also artists one rarely sees—like Marguerite Ohman (new to me, with elegant watercolors of bridges) and George Ault and Ralston Crawford, whose spare, hard-edged Precisionist works nailed the city’s newly emerging colors and geometries.

As curators Kirsten M. Jensen and Bartholomew F. Bland write in their catalog essays, much of this work harbors a tension between awe and terror, an admiration for the new that is tempered by fear of the standardization and alienation that accompanied it. (People appear rarely, and then only at the margins, bit players in the drama of building and capital.) From the vantage point of today, some works may inspire nostalgia. The time of grand public works that they document has passed, and the buildings that join our skyline today tend to be the preserves of the ultra rich. And some may even menace, like a circa 1909–10 painting by George Luks that shows a railway roundhouse, cloaked in black, pumping smoke into a majestic sky. 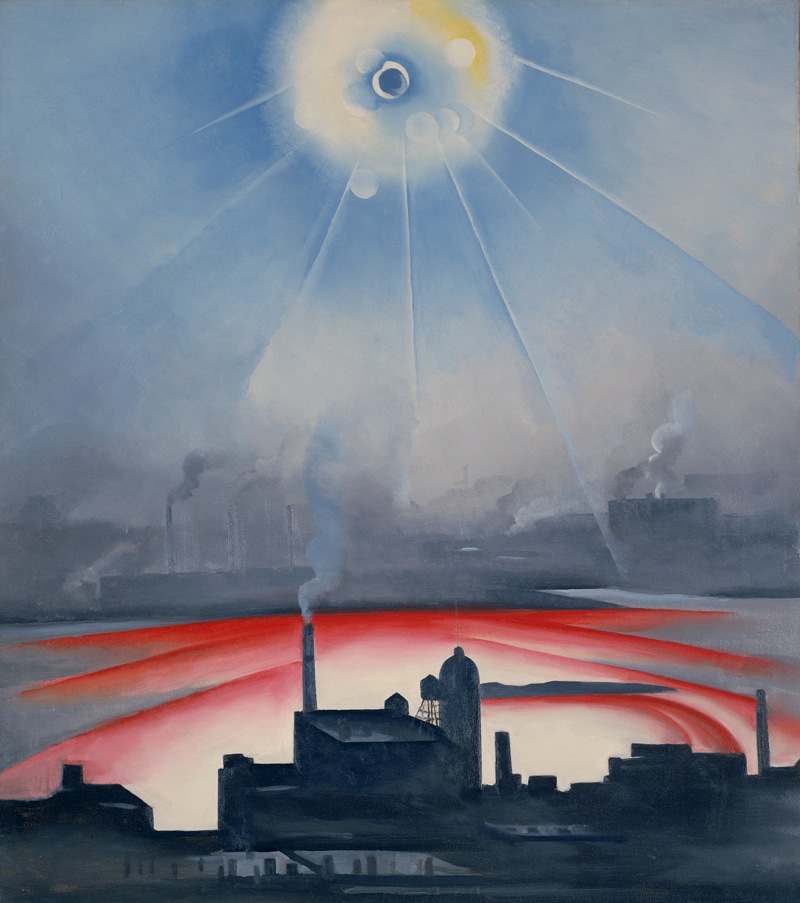