In approximately 14 days and twenty hours, according to a somewhat ominous live online countdown, activists from across the Internet will come together in a shared mission to stop the NSA from collecting all our data and stuff.

A coalition of Internet groups have planned “The Day We Fight Back,” and it’ll happen on Feb. 11, 2014. On that day—in honor of the death of Aaron Swartz, as well as in celebration of SOPA and PIPA’s failures (remember those?)—protesters web-wide will start encouraging people to call up the government and tell them all this data collection malarkey has got to stop.

David Segal, executive director of Demand Progress and one of The Day We Fight Back’s leading organizers, helped clarify the protesters’ mission.

“We’re trying to get the USA Freedom Act passed, which would end bulk collection of ‘meta-data’ by the NSA, and institute some other critical reforms,” he told Betabeat in an email. “We’d also like to see additional privacy protections for non-Americans, of which there are next to none.”

Between now and Feb. 11, Mr. Segal’s team will be working to draw “activist organizations, platforms, smaller websites, and individuals” into the movement. He said they currently have 3000 websites signed up so far—including Reddit and Mozilla—along with “tens of thousands of individuals” who’ve expressed interest in participating.

On the actual day of surveillance fighting, supporters will post banners on their sites urging viewers to call up their legislators and complain about the NSA’s mass surveillance program. Participants are also encouraged to “be creative.” “This moment is whatever we, the broad community of people who care about the Internet, make of it,” the site says. “Post a comment with a link to every NSA-related story. Make and share a meme. Build a website. Organize an event.”

There’s a chance next to no one will call their legislators, in which case this effort will only amount to slacktivism. Is it really so different from that week when we all passionately shared those KONY videos, and then promptly stopped because our lazy asses lost interest?

But maybe we’re just cynics. After all, Internet protests like the American Censorship Day and the Wikipedia blackout certainly helped stop the passage of SOPA. There’s no reason why that couldn’t happen again. 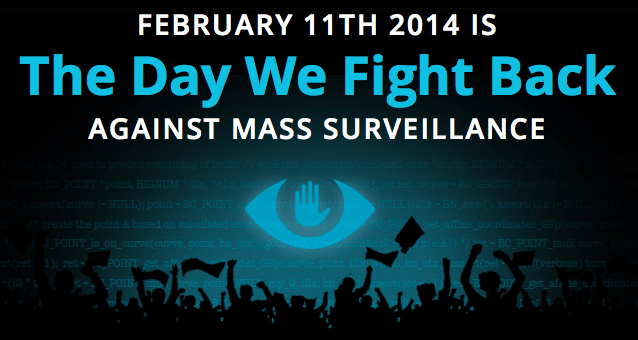