This story is basically National Treasure, but with less Nicholas Cage, and more grandmas.

My grandmother passed away in 1996 of a fast-spreading cancer. She was non-communicative her last two weeks, but in that time, she left at least 20 index cards with scribbled letters on them. My cousins and I were between 8-10 years old at the time, and believed she was leaving us a code. We puzzled over them for a few months trying substitution ciphers, and didn’t get anywhere.

My father found one of the cards the other day and I love puzzles and want to tackle the mystery again. Based on some of the repeating segments (many lines start with PST, many end with PAGA, and TYAGF repeats often at the end), I’m thinking they may be song lyrics. She inserts lots of backwards commas, and strange breaks at various points that could indicate stanzas. The back of the card has two numbered lines that contain the same letters. The letters (with line breaks to match the card) and images of the cards are below.

Here are the pictures Janna posted of the index cards: Much to no one’s surprise, it didn’t take long for the Internet to decipher much of Janna’s grandmother’s code. Around fifteen minutes after she posted the query, an Ask MetaFilter user pointed out that the letters at the end of one of the messages formed an acronym for the Lord’s Prayer.

Was she a religious woman? The last As, as well as the AAA combo, make me think of “Amen, amen, amen.” So extrapolating — TYAGF = “Thank you Almighty God for…”

Pretty crazy, huh? It gives us the same kind of chills we get when Benedict Cumberbatch explains stuff on Sherlock.

“Holy cow! 14 minutes to solve the back of the card that has been bugging my family for 20 years! That is amazing!” Janna wrote.

Users have continued to offer up their conjectures since Janna’s original post went up on Jan. 20. Most seem to believe the message is, indeed, religion-based, and they’re finding some pretty spine-tingling connections between the code and traditional Christian prayers.

If you’re still holed up from the blizzard and tired of watching Pretty Wild on repeat, feel free to take a shot at it. 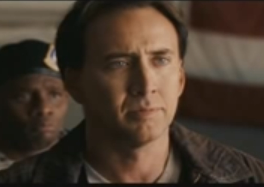