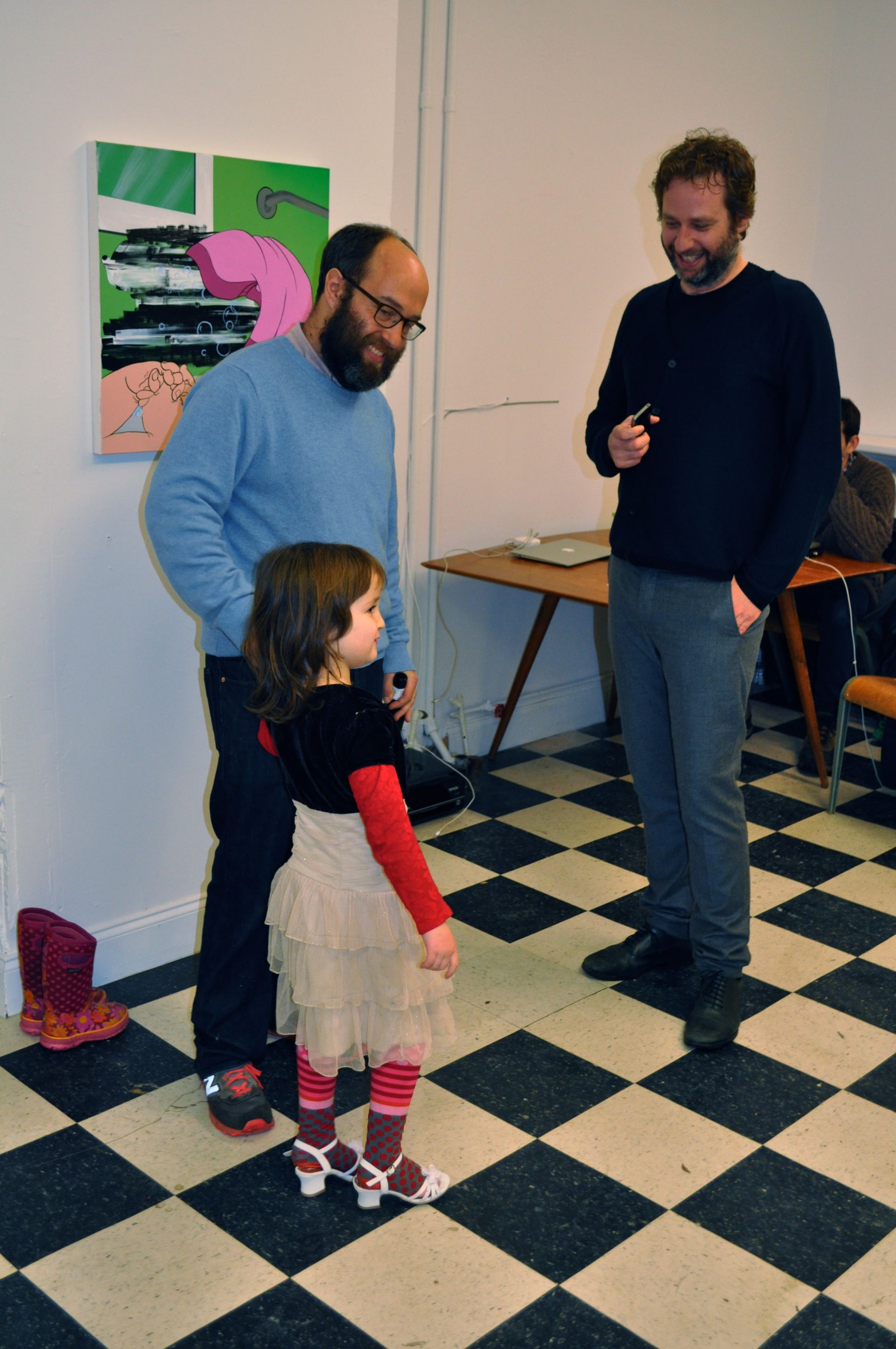 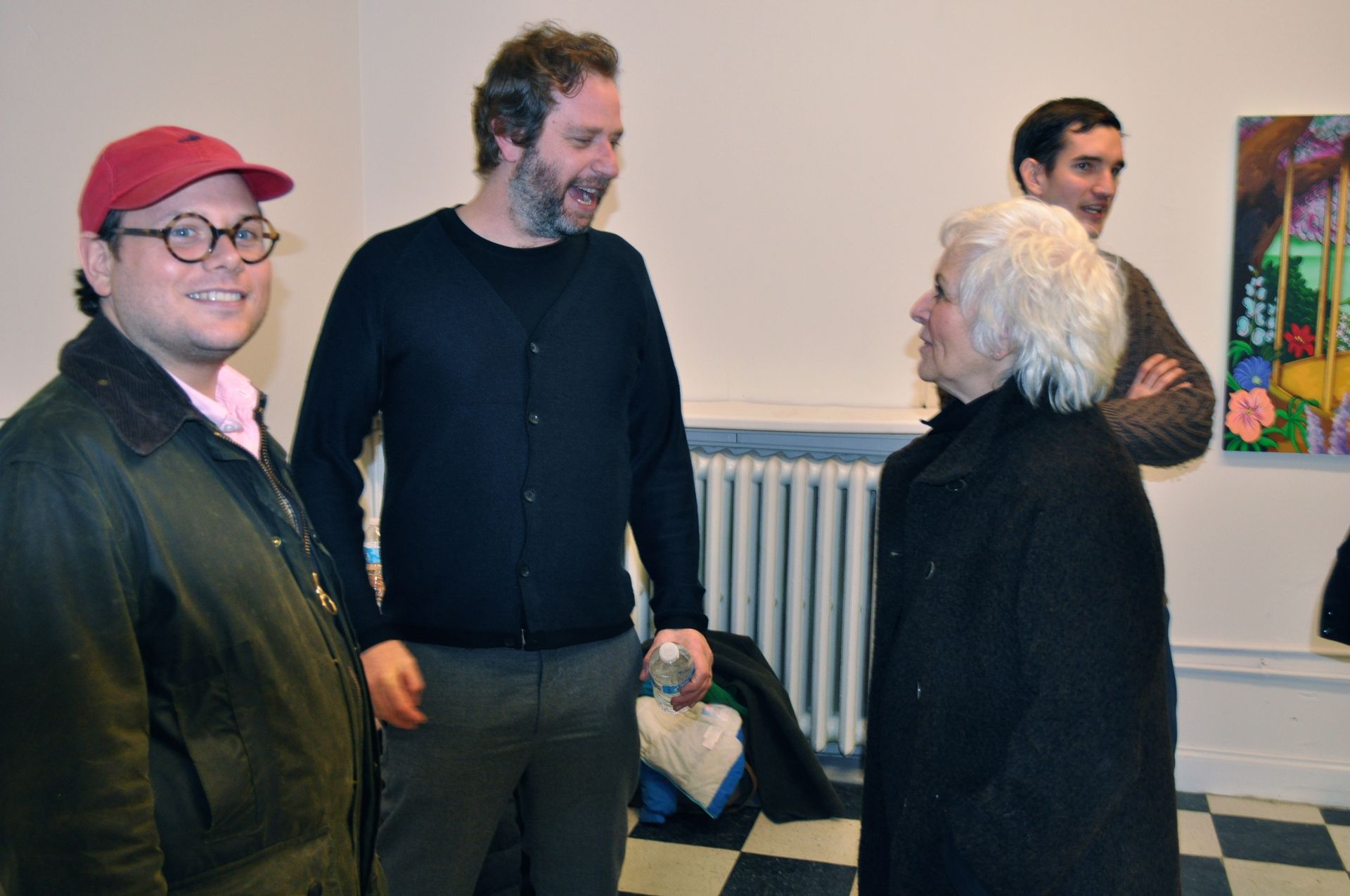 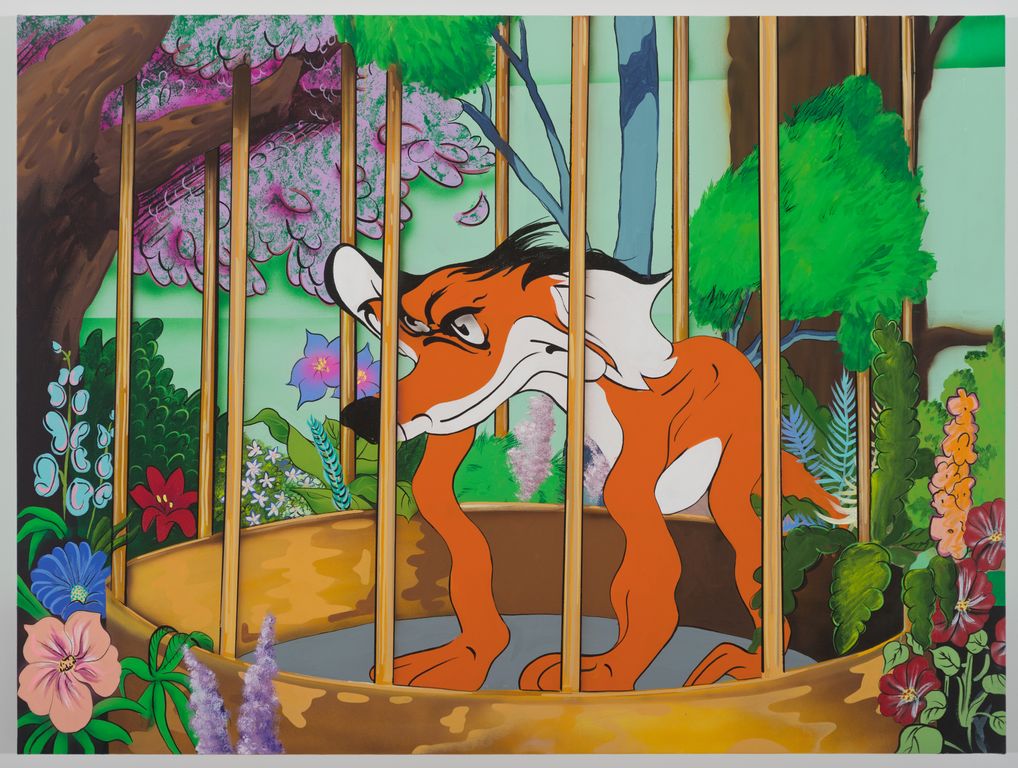 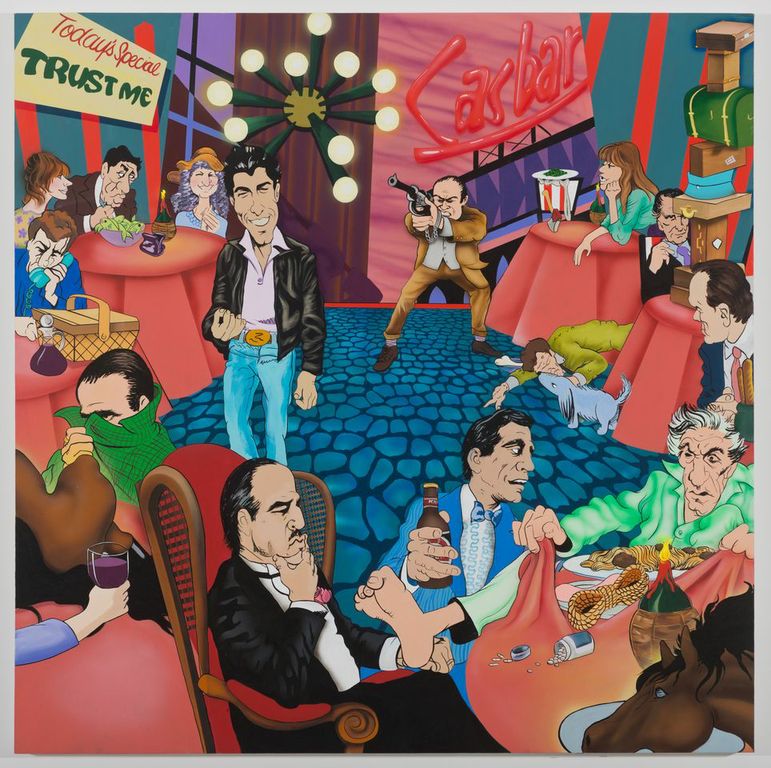 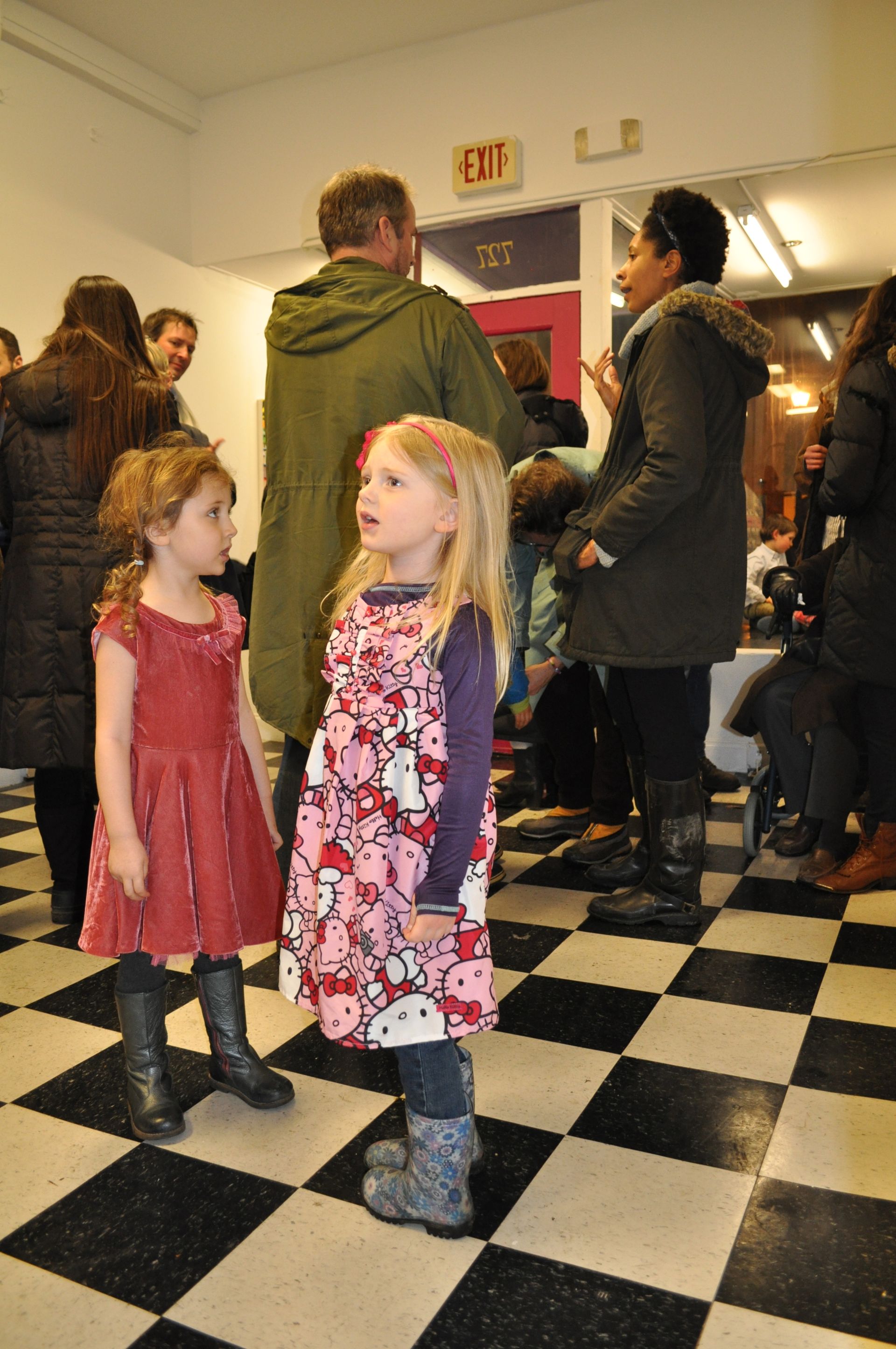 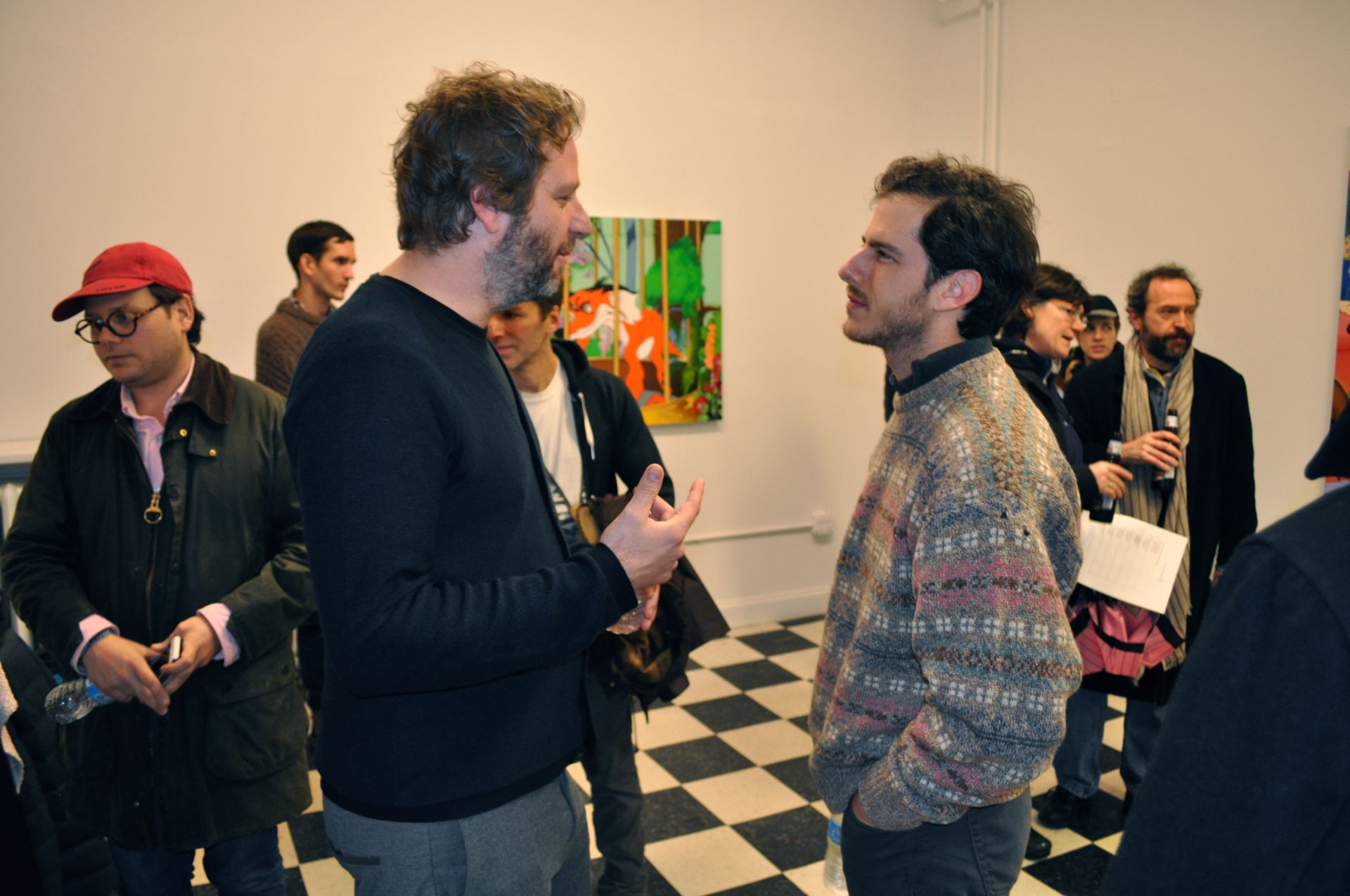 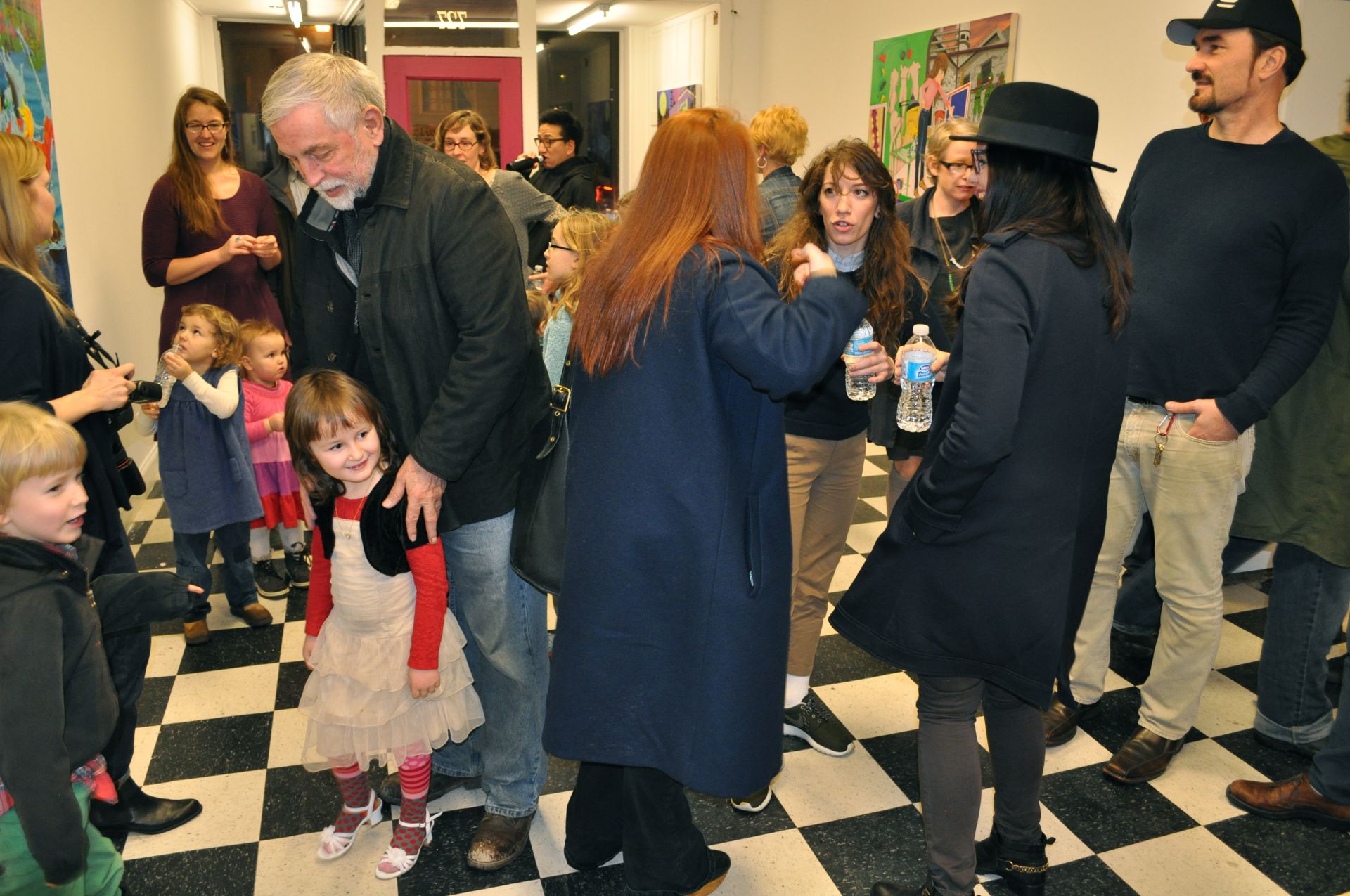 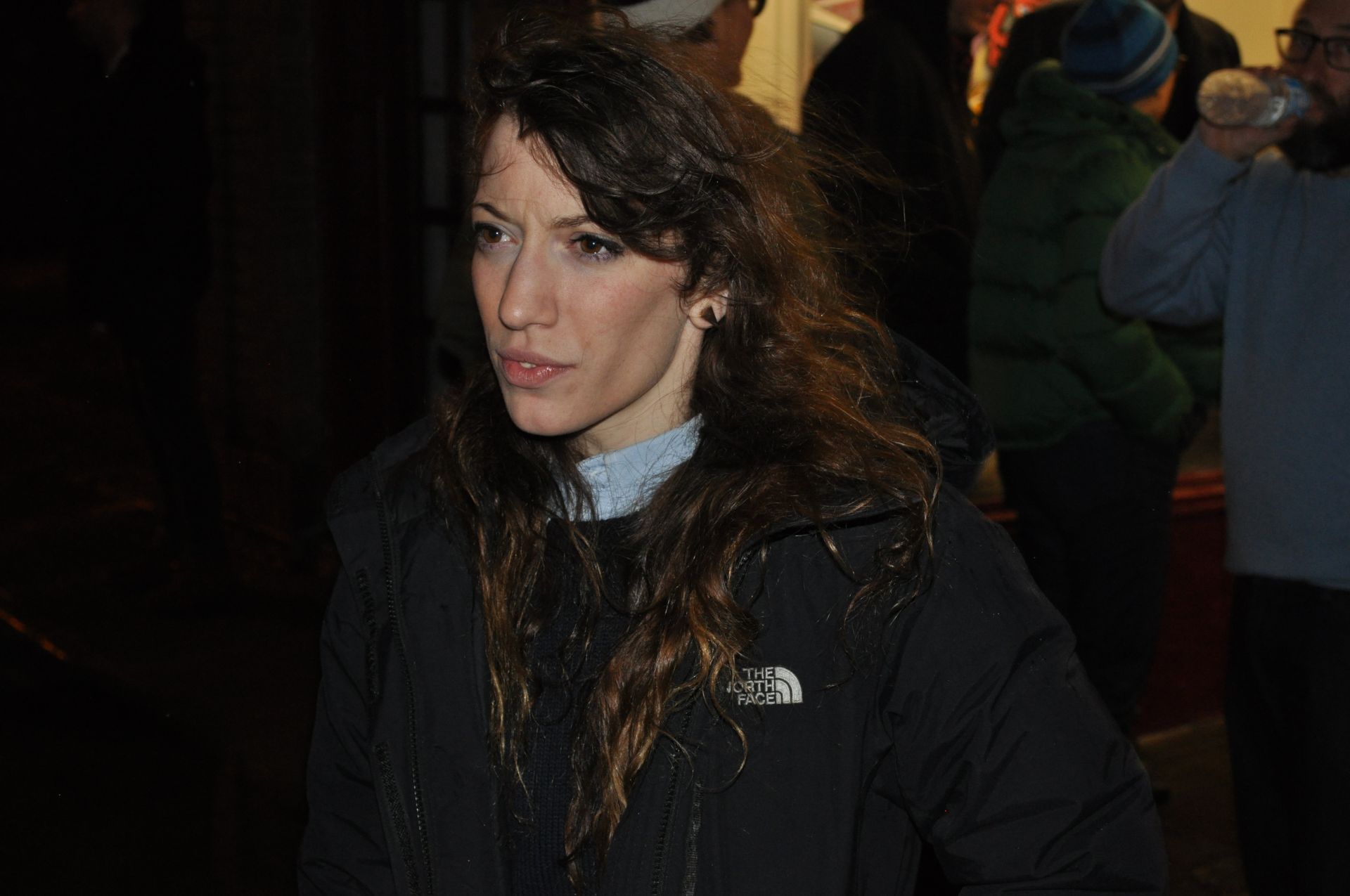 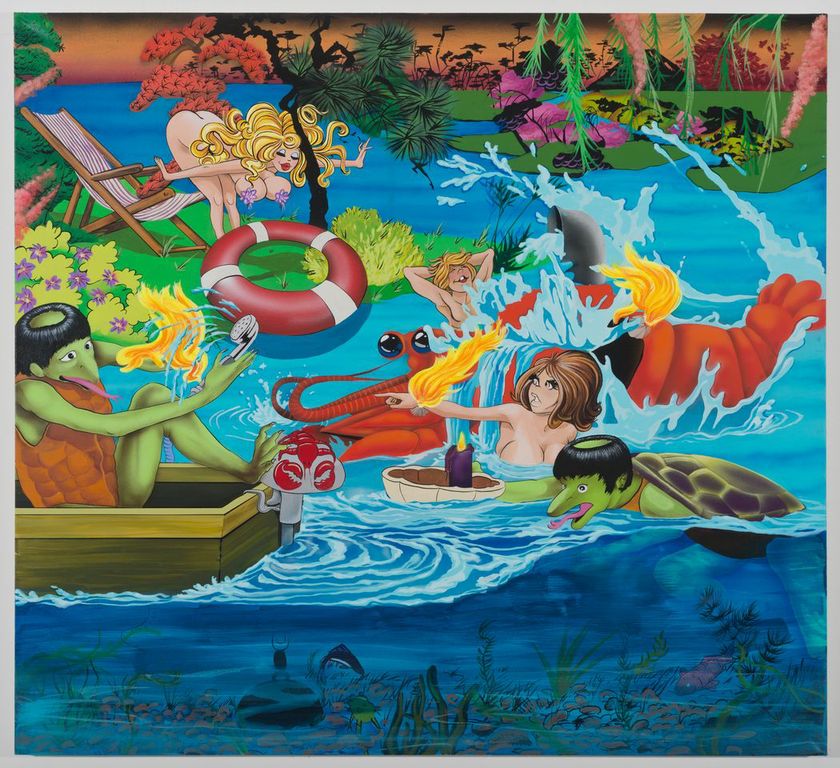 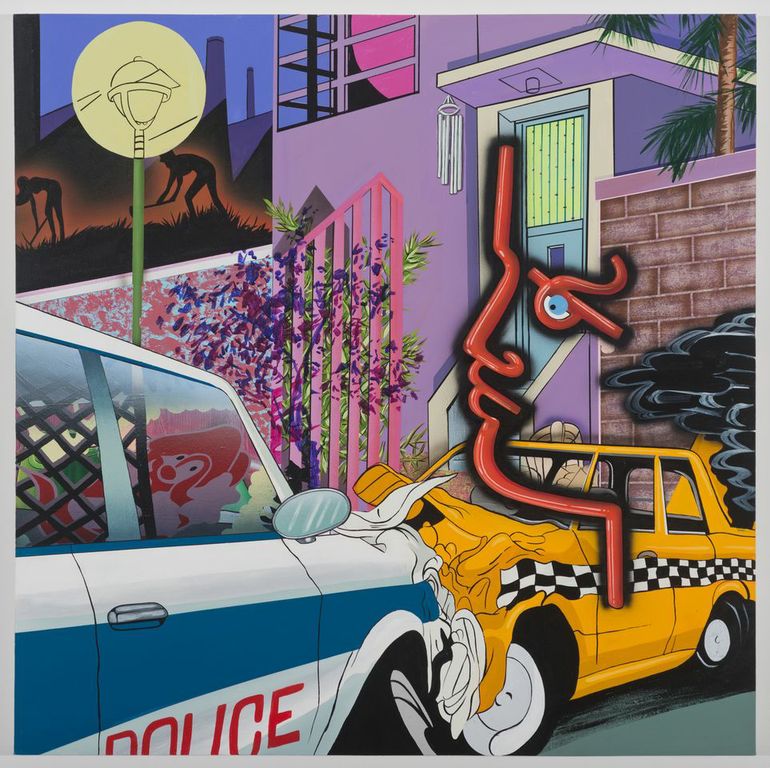 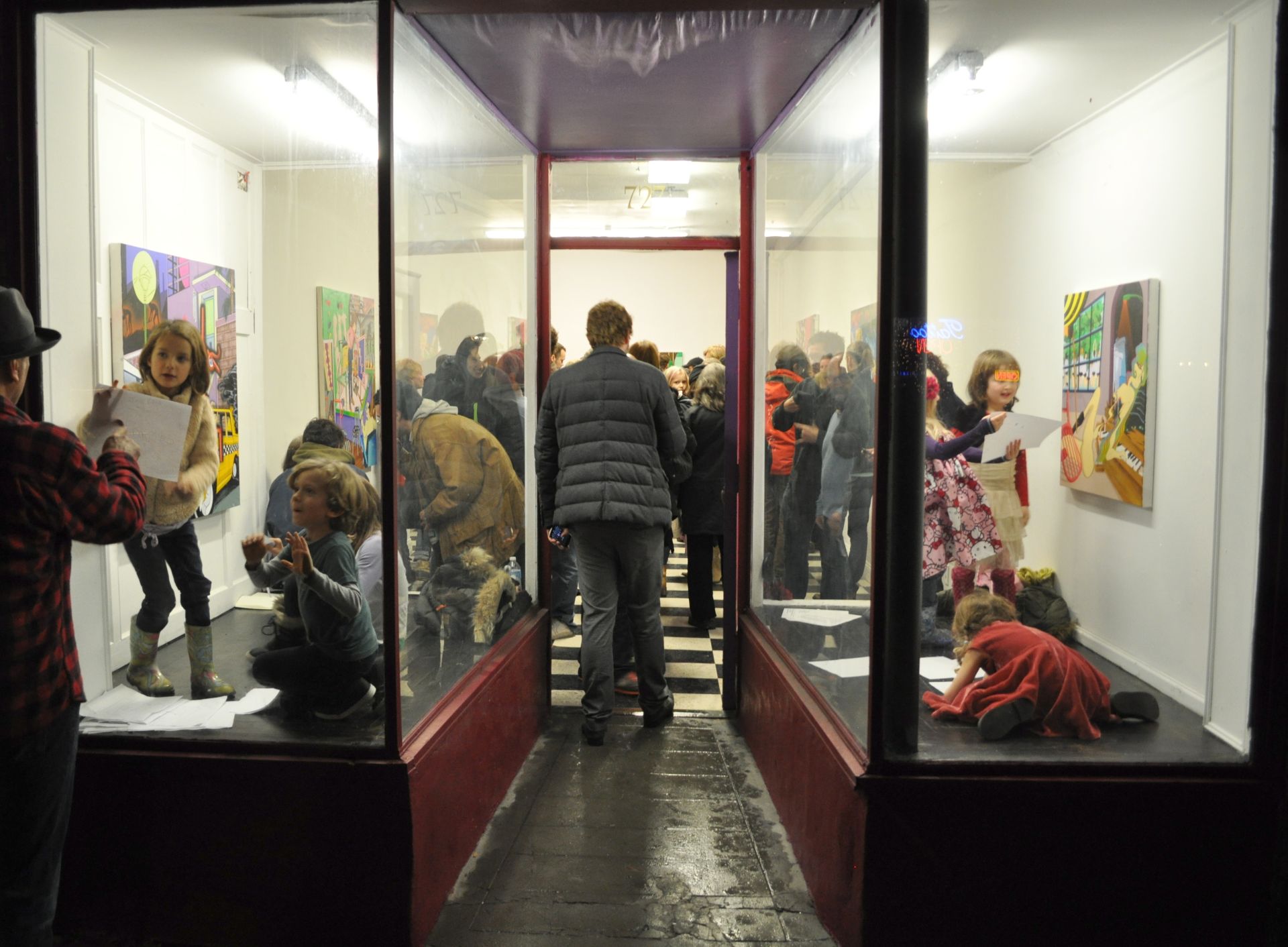 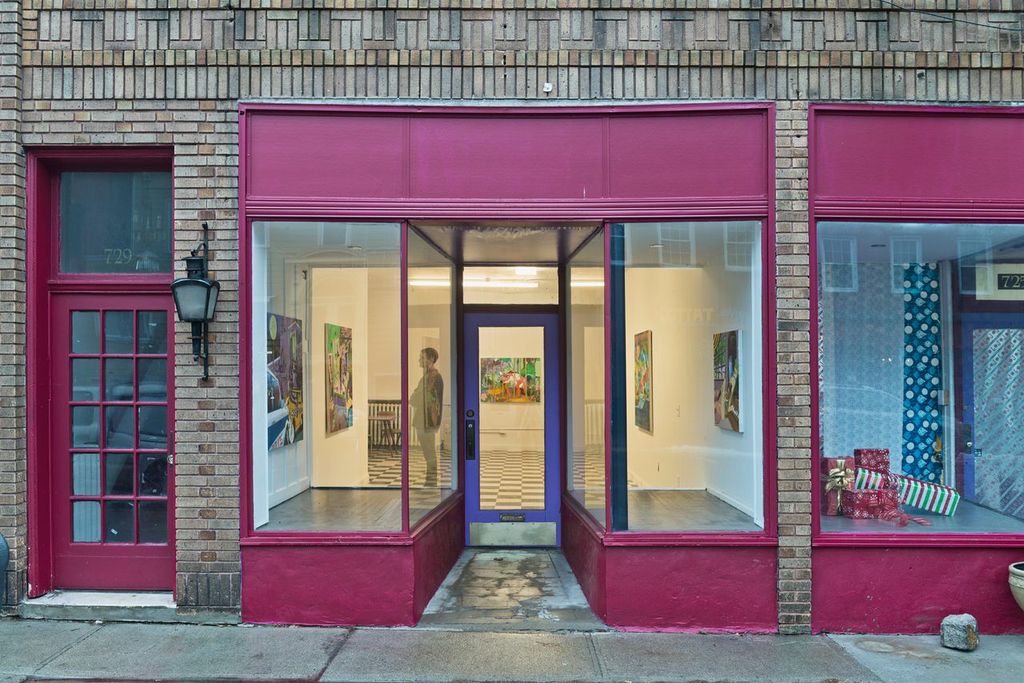 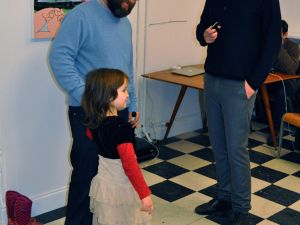 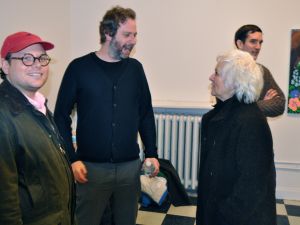 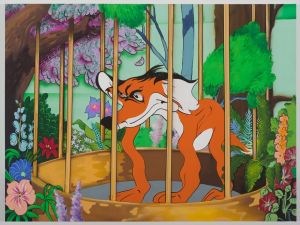 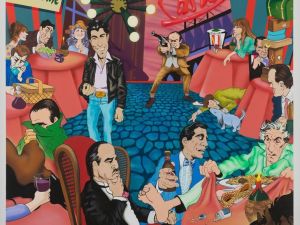 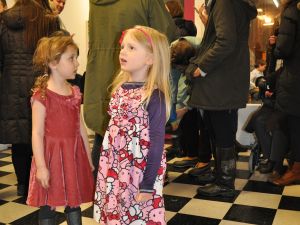 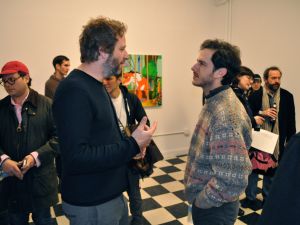 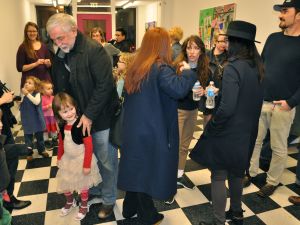 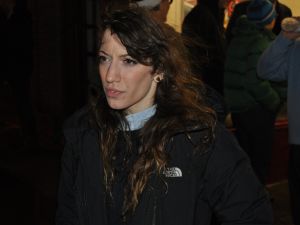 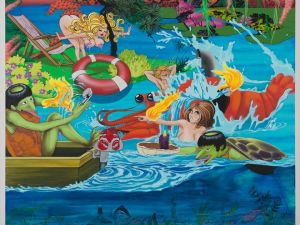 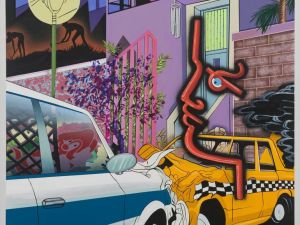 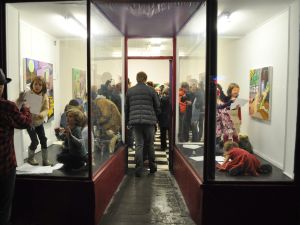 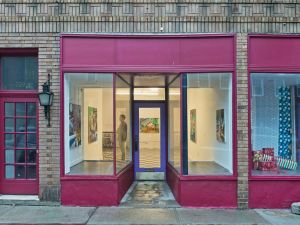 Jamian Juliano-Villani’s got problems. “I don’t have a studio yet, I work in my room, I have no tooth,” said the frenetic 27-year-old painter, pointing to a gap near the front of her mouth. She lost the incisor by grinding her teeth about six months ago, but said she’s been too busy to get it fixed. “Today I actually took my first nap in almost a year,” she continued. A relief, because before that, the Jersey-born, Bed-Stuy-based artist hadn’t slept in three days. Walking down the street, she said, “every garbage bag was moving all of a sudden.”

Ms. Juliano-Villani should be able to rest easy now. Saturday night marked the opening of Retrospective, the new exhibition space in Hudson, N.Y., co-owned by dealers Zach Feuer and Joel Mesler, who mounted seven of her gleefully lurid, cartoony paintings for their inaugural show. Retrospective, a small, street-level storefront tucked beneath a slightly derelict apartment building on the town’s main drag, will provide a platform for emerging artists, a vision reflected in its name.

“Often when people do their first show, they try to sum it up, they try to make it a conclusive thing of everything that happened before, so in a lot of ways, the first shows feel broader than shows when the artists are older and making these singular statements,” said Mr. Feuer. “It’s funny to think of looking back at the start.”

Mr. Mesler only visited Hudson for the first time two weeks ago, but he and his wife are starting to look for a house in the area, where Mr. Feuer lives. It may be helpful to have a toehold near town, where one finds rapidly deteriorating colonial homes and high-end antique stores alike, as the two dealers are staking out new satellite spots for Retrospective projects.

“There are all these empty spaces around town, so there’s going to be auxiliary shows all the time,” said Mr. Feuer, mentioning various apartments, empty storefronts and houses. Just a day before the opening, Messrs. Feuer and Mesler secured a new two-bedroom row house. “I think eventually some part of the residency will be there, but we might do shows there, too,” said Mr. Feuer.

“Zach and Joel are two of the most weirdly smart people you’ll ever meet,” said Benjamin Godsill, head of Phillips’ Under the Influence sales in New York, at the opening. “Oftentimes their ideas sound outré, and then you get into them and you realize, ‘Oh this is exactly what should be happening, this is exactly the antidote to the many things that are ailing the art world.'”

Being outside the city curbs, for instance, the attention deficit brought on by busy, 12-opening nights. “It’s nice to just really be here,” said Mr. Godsill. “No one is going to come up and talk to me, no one is going to interrupt this conversation.”

Ms. Juliano-Villani said that while she liked how escaping city made showing “a little less intimidating,” she was a bit apprehensive about the show’s visibility. “I was saying to Van [Hanos, who has the next show in the space], who the fuck is going to come to Hudson? It’s so far.”

The art world may already be in Hudson, though. As Mr. Feuer pointed out, Lucien Smith made a bunch of his paintings in the area, Brice Marden, Ellsworth Kelly, Michel Auder, David Hammons and Glenn Ligon live close by, dealer Jack Shainman is opening a 30,000-square-foot space in nearby Kinderhook, and Marina Abramovic plans to unveil her eponymous institute just across the square from Retrospective, though some have questioned whether it will open. “Hopefully it does,” said Mr. Feuer, “because I think a lot of people want to see eight-hour performances strapped to a chair.”

Ms. Juliano-Villani, who was driving back down to the city later that night, nearly brought a Hudson native home with her: earlier that day, Mr. Feuer Instagrammed a shot of Ms. Juliano-Villani and Mr. Hanos holding a kitten in the pet store near Retrospective. Ultimately, she decided to keep things simple. “I forget to eat, to shit, to sleep myself, so a cat would be a bad idea,” she said outside the gallery. “My betta fish was dead in a week.”