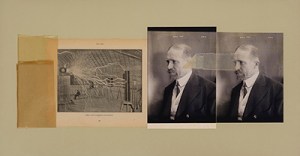 On the left side of Janet Malcolm’s collage Melbourne, under a crinkly, irregular piece of translucent brown glassine, is a page from Emily Dickinson’s Open Folios: Scenes of Reading, Surfaces of Writing by Marta Werner, a study of the poet’s surviving fragments that includes handwritten punctuation on its typewritten transcriptions. Under a poem about the meaning of “plumb” (“Some region / of rectitude”) is a sensuously exhaustive accounting of the physical details of the fragment that bore it (“wove, white stationery, now measuring approximately 137×128 mm”): granular, electric abstraction resting on evanescently suggestive fact. To the right is a brackishly black square plate from an old astronomy text on which a huge gray ball overset with an off-center, black-hairline X is possessed and made particular—if not befouled like an egg yolk with a blood spot—by a tiny black dot. It’s the planet of love eclipsed against the sun.

Ms. Werner’s collage of Dickinson’s collage dominates the rest of Ms. Malcolm’s collages—a sweet correspondence between the two surviving writers was printed in issue 126 of Granta—along with five more transits of Venus and plenty of brown glassine. But there’s also room for an illustration of Nikola Tesla sitting calmly under a manufactured lightning storm, a postcard of an Eva Hesse basket and a browned paperback flyleaf inscribed “With love and all good wishes to my little friend Edith” by a Mr. Garfinkel. These finds are laid together earnestly and displayed, like insects in vitrines, with too much space around them. Distinct points of meaning, thin and fragile but purposeful and unafraid, they huddle together in an endless space.

Appalling Trust cuts a photo of Joseph Albers’ Color Study for White Line Square out of a Times story about a show at the Morgan Library, turns it on its side and lays over it Dickinson’s assertion that “God cannot / discontinue— / himself—.”