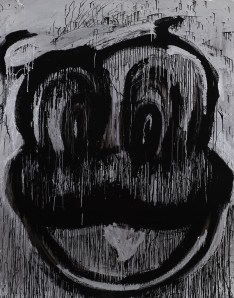 London Donald (2010) by Pensato. (Courtesy the artist and Lisson)

Joyce Pensato, the Brooklyn-based painter of huge, exuberant, joyfully brash black-and-white depictions of cartoon characters like Donald Duck, the Simpsons and Batman, has signed on to show with Lisson, which has galleries in London and Milan and an office on the Lower East Side. Her first show with the gallery in London will run March 26–May 10.

In other Pensato news, her awesomely titled museum show, “I Killed Kenny,” which originated at the Santa Monica Museum of Art last year, opens at the Contemporary Art Museum St. Louis in about two weeks.

Ms. Pensato is also represented by Petzel in New York, Corbett vs. Dempsey in Chicago and Galerie Anne de Villepoix in Paris.