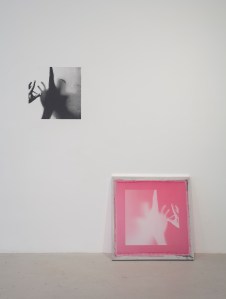 In an alluring new video by Julien Bismuth, on view in his second exhibition with Simone Subal, we watch the expressionless face of a woman as she watches an unseen film (The Wizard of Oz, it turns out). In another video in the show, the Paris-born, New York-based artist is seen from behind, sitting in a chair silently reading a long Raymond Roussel poem. A profound stillness, reminiscent of the kind found in 17th-century Dutch interiors, prevails—these are solitary, focused people allowing art to work its alchemy on them.

Rich pink mesh silkscreens are arrayed around the space—some on the wall, some on the floor—that show Mr. Bismuth’s hand, a ghostly white presence, as he manipulates pieces of paper. In a few places, Mr. Bismuth has actually used the screens to make prints on the white walls in dark ink. This combination of works may be about the gap—and the transition—between process and product, screen and print, that moment when an artwork comes into its own. With silkscreening, that’s an inexact process, each print coming out ever so slightly different, as paint is pressed through little mesh holes.

A short slide show has anonymous snapshots from what looks like a car trip, which were made by Mr. Bismuth with his first digital camera in the late 1990s, a moment of technological transition. Also here is an audio piece, almost two hours long, that plays through headphones hanging from the ceiling. Actress Jennifer Grace reads what one might call “statements of purpose” from everyone from artists to entrepreneurs: “I want an international language,” “I need to promote myself more forcefully,” etc. It’s funny, threatening—“I want it to be savage”—and disjunctive in the context of Mr. Bismuth’s elegant show, and it speaks to a certain unbridgeable ravine between artists’ intentions and viewers’ reception. It emphasizes that meaning in art is unfixed and precarious, differing from viewer to viewer and over time. That’s art’s appeal and what keeps us coming back to it.